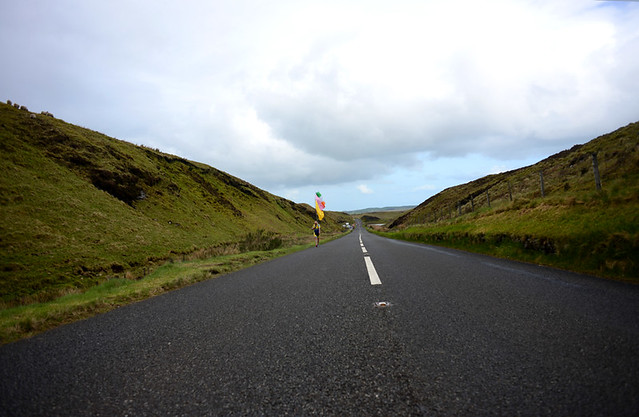 Up the winding coastal road framed by stark, peaty hills, walks a man in Tinkoff Saxo cycling kit, carrying a pole topped with a cluster of flags. As he makes his way up the incline, the pole flexes and the flags flutter frantically in the wind that's been picking up since morning. The bursts of colour in the gray drizzle commandeer the attention of roadside onlookers. On top is the green, white and orange of the Irish tricolour. Below it, the bright pink of the Giro inscribed "Giro d'Irlanda." And beneath those, a yellow flag with the cryptic "John 3:7". 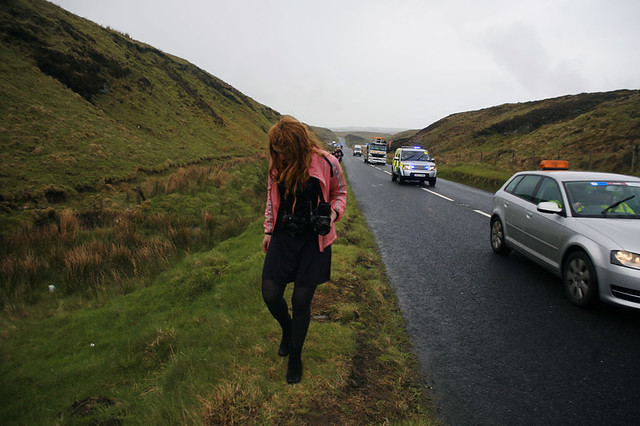 As I kneel at the side of the road and photograph his journey's progress, a police car slows down beside me. "Is that your car parked over there?" says the officer.

"It's not," I reply, continuing to compose my shot.

"But I think it is," replies he. "The fellows there say 'That girl in pink with the camera just come out of it'. Look if it's your car, you need to come with me."

From across the road a group of people watches intently. 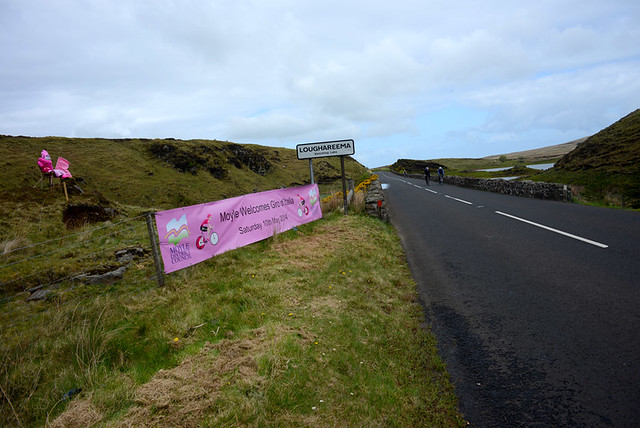 Since the early morning, we are on the Antrim Coast between Ballycastle and Cushendall, by the spooky, mist-covered Vanishing Lake, waiting for Stage 2 of the Giro d'Italia. The idea is to get the peloton coming through an unmistakably local landscape. Not the prettiest landscape with the most dramatic coastal views, but one that captures the feeling of what cycling here is really like. Perhaps we do too good a job in that respect. The sprinkles of pink against the otherwise bare, green-gray-brown background only accentuate the surrounding emptiness and surprising lack of festivity. The crowds are thin, the police unfriendly. There is a vague but unmistakable tension in the air. And that's before the drizzle becomes a downpour. 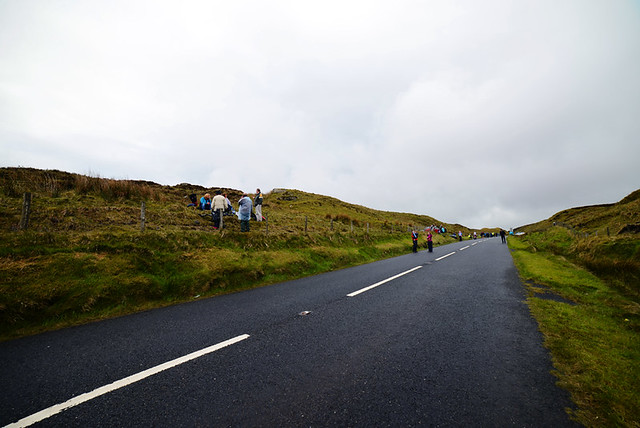 On a grassy bank a cluster of spectators attempts a picnic, now clasping soggy clumps of food under their ponchos. 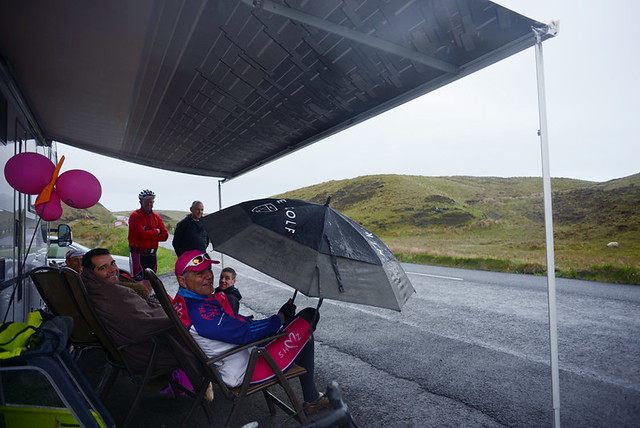 Others fare better under the canopies of enormous caravans that seem home to entire cycling clubs from nearby counties. 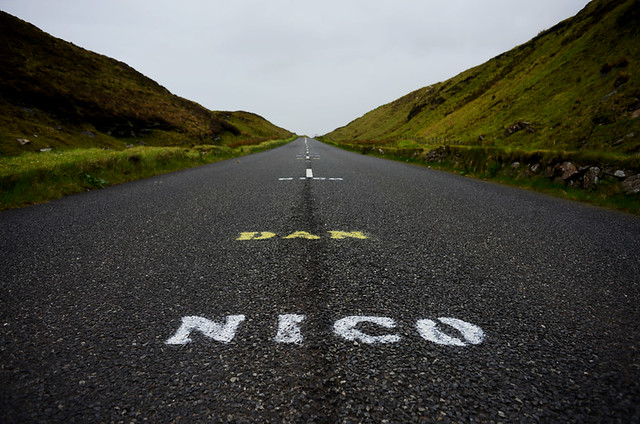 The road has been marked with words and slogans, including tributes to Irish riders Nicolas Roche and Dan Martin. 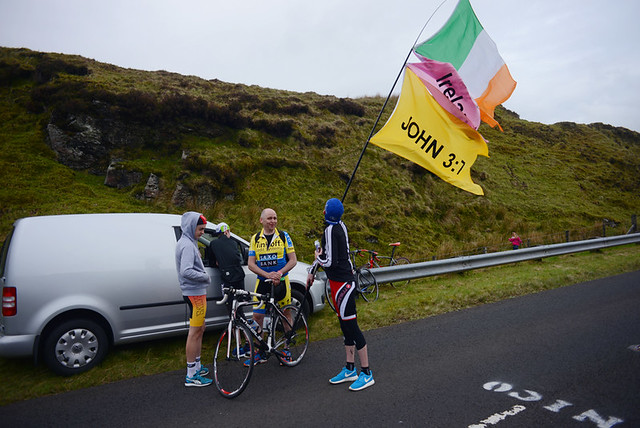 The flags are slowly making their way to the hilltop. 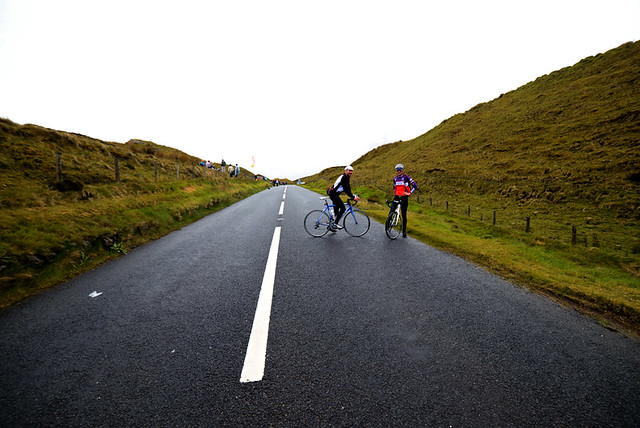 Cyclists - solitary and in groups - parade up and down the car-free road in anticipation. 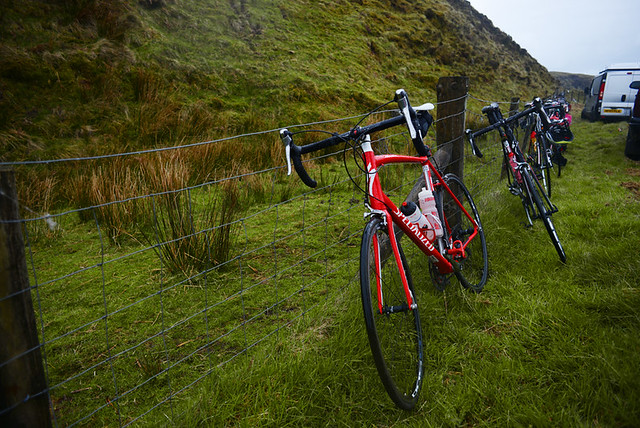 Until they too are told to clear out. The breakaway is 20 minutes away. 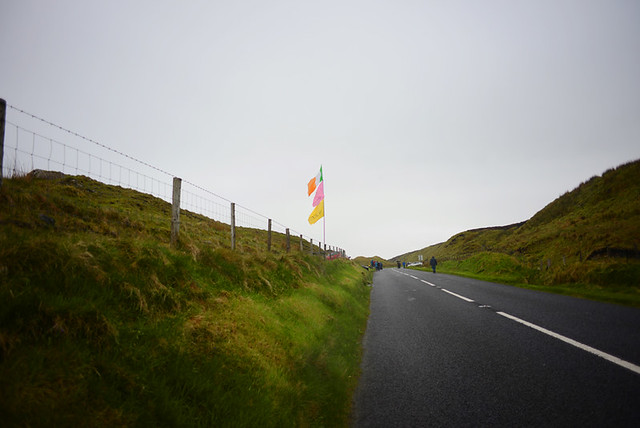 The air grows thick as we wait. We wait for the riders to overwhelm us with the power and energy and colour of their presence, while at the same time worrying that they will not - that it will all be over too quickly, that it will make no difference at all, that nothing - not even the 2-wheel stampede of a magnificent world-famous race - can stir this ancient, tense place. 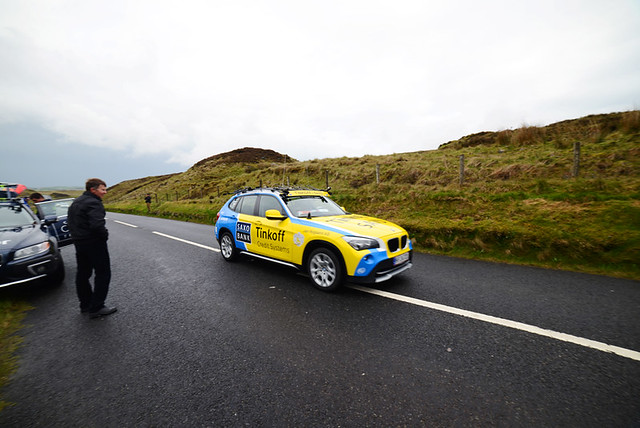 When the first team cars go by it is a welcome change from the echelons of police vehicles, tow trucks and vans peddling pink t-shirts which no one wants to buy. People begin to shout. They get close to the cars, run after them. 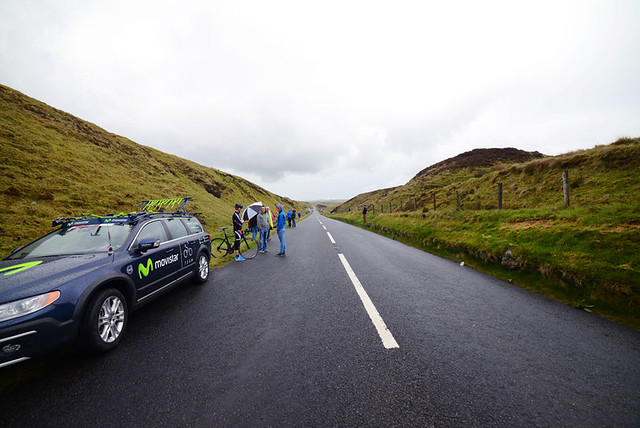 When a Movistar car pulls over to the side of the road, it is politely swarmed. The tanned men inside roll down the windows and speak in bemused tones with thick accents to the crowds who ask rapid-fire questions and seem unable to stop themselves from touching them.

"When is the break-away coming?" 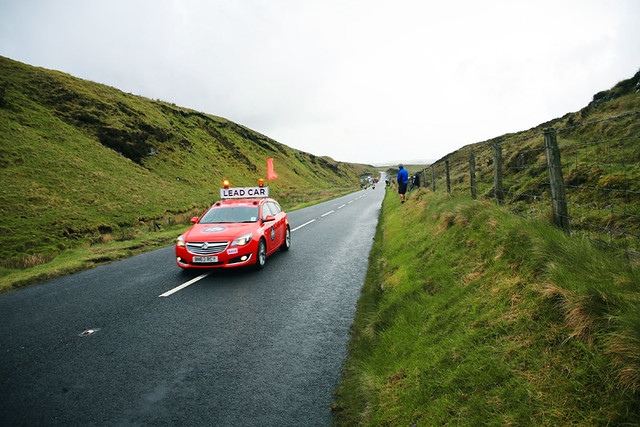 Things happen quickly after that. First we hear sirens and the sounds of a hovering helicopter.  Then we see them, in quick procession. The red lead car. 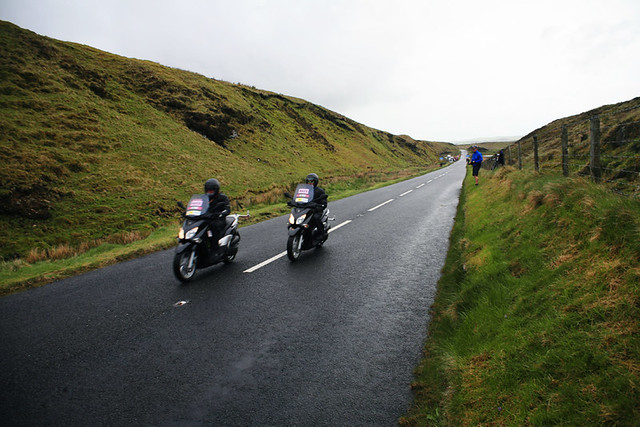 The black motorcycles with pink "Race" decals on their windshields. 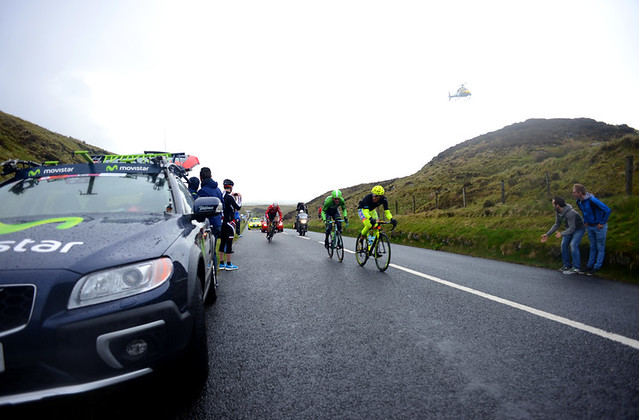 And immediately after, a string of 4 skinny riders, pedaling hard up the long incline, as the helicopter circles above. 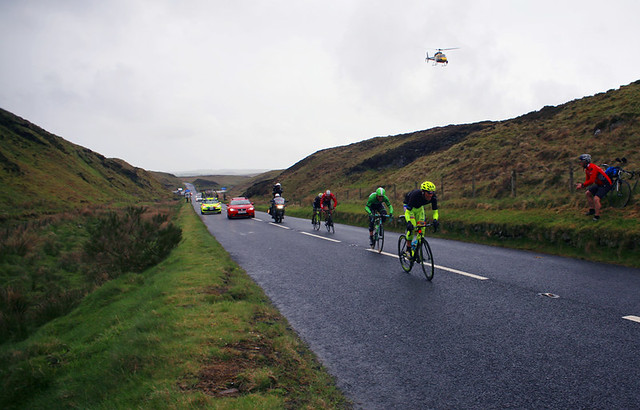 This seems to go on in slow motion, and at the same time it is a blur. I am not the only one who has no idea who the riders are, as the spectators can be heard referring to them by the colour of their kit. First comes the neon yellow one, with the green one close behind. Then after a gap, comes the red one, followed by the black one. More team cars and motorcycles go by, and in the distance we can see a dark cloud that is the peloton. 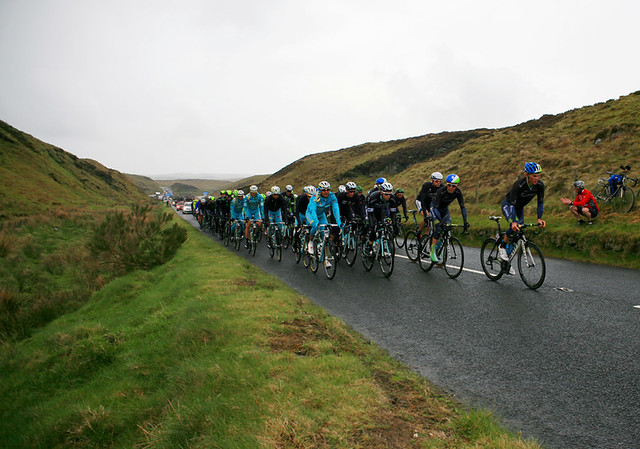 What do I expect the peloton to look like as it goes past? I am not exactly sure, but not the way it does. Perhaps I expect it to be long, narrow and orderly - a drawn out echelon of maybe 4 riders abreast, vying for position elegantly. Instead it comes at us in one fat messy clump that takes up the entire width of the road, and looks unexpectedly haphazard.

The riders in the bunch appear not so much tired from physical exertion as weary, even a little bored. Some are chatting and chuckling about something that must have annoyed them, with a shake of the head like "whatcha gonna do." A few are glancing around and actually yawning. One smiles and another winks at me. Which ones are doing all these things? I have no idea. The entire peloton looks to be wearing black with the exception of the refreshingly smurf-hued Astana guys, so those are the only riders I can even identify by team. 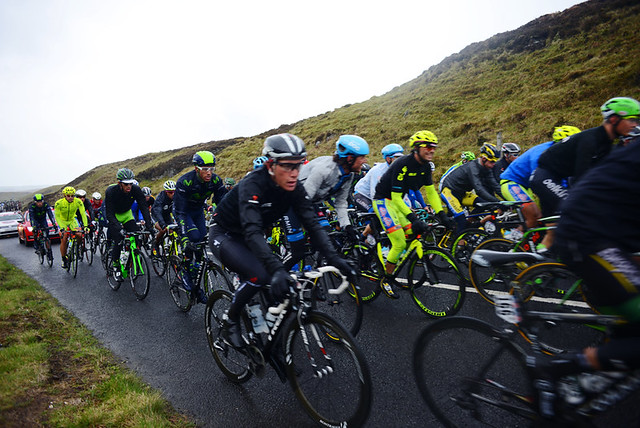 I do not get my bearings in time to smile back, or wave, or shout anything encouraging. I am using a big film camera, advancing the knob at a rate I would not have thought possible, clicking away and hoping for the best in the 5 seconds it is all happening.

It is over as soon as it starts. 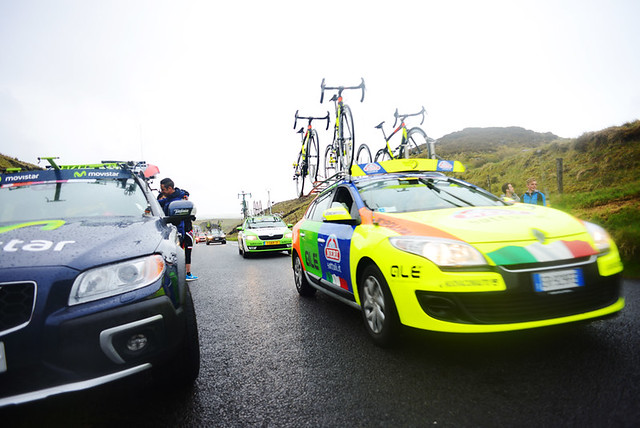 After the peloton I expect more. Small groups of stragglers, a drawn out procession of some sort. But after a colourful blur of team cars, the road is empty and silent again. It takes me some time to realise it is actually finished. 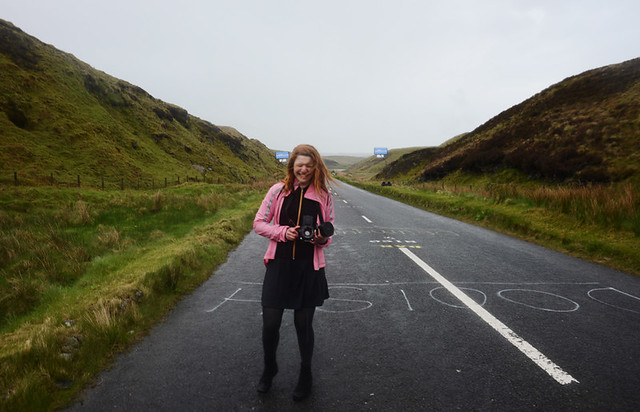 Before long, people are walking and cycling on the road again. Cars are permitted to leave. And, just like that, off everyone goes, encouraged by the lashing rain. Was I hoping for a street party? Hardly. But the speed at which everything reverts to its pre-Giro state is more than a little anti-climactic. The Giro has been through the Antrim coast and all I got is this soggy hair and water drops on my camera lens. 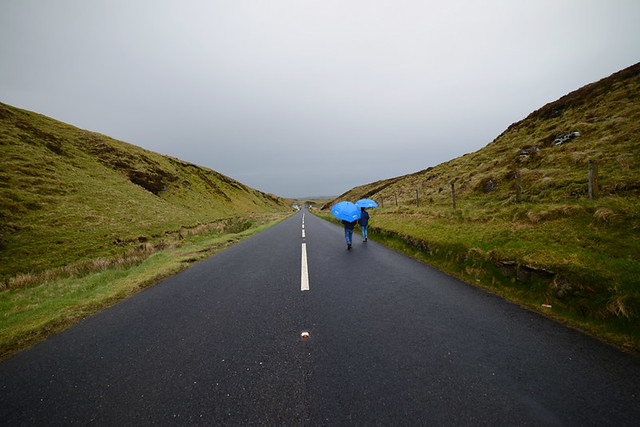 The peloton has vanished, and with it the spectators, and the scraps of pink, and the bicycles, and the Irish flag on the hilltop. Only the Vanishing Lake itself, near-invisible earlier that morning, now swells and deepens into its brooding ripply-gray existence, nestled contently amidst the soggy peaty glens.
Labels: bicycle events Ireland races