Ode to the Pseudo-Wall, Its Joys and Hidden Dangers 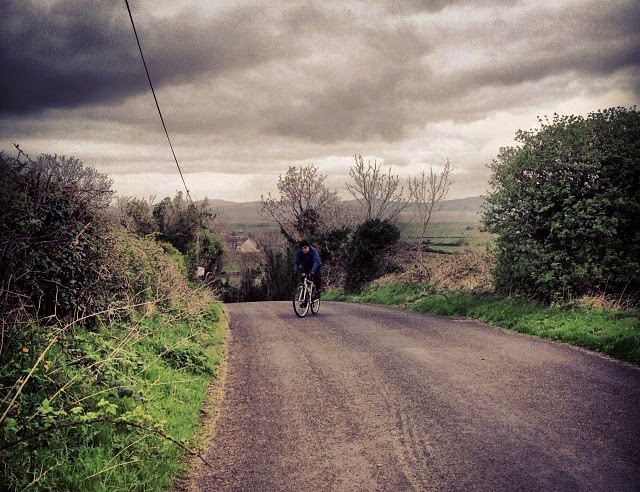 As cyclists grow familiar with hills, in their countless iterations and guises, a reliable favourite is what I shall call here the Pseudo-Wall.

Recall those times you've cycled, at a good clip, on the rolling terrain of a vast open road as yet unknown to you - perhaps as part of a brevet, sportive or other organised ride - when suddenly, in the distance, you see this very road you are on turn vertical. From your vantage point it looks not so much like an incline or even a steep hill, as literally a wall - stone gray and perpendicular to the ground beneath you, pointing heavenward and of an impossible height.

The first time you encounter such a sight, it fills you with dread and panic. Perhaps a strange taste builds up in your mouth. For surely what looms ahead is unscalable. Oddly, the other riders beside you are not screaming, writhing, or turning back in terror. Perhaps they are made of stronger stuff than you.  Or else they hide their true emotions, just as you attempt to do.

Contemplating this, you advance toward the fearsome giant and stoically brace for impact - for the burning pain in your legs, for spinning wildly or standing on the pedals and stomping, for the possibility even of having to unclip and walk. But as your approach continues, something rather odd happens: The point of impact never comes. It is as if the transition toward the wall's gruesome incline blurs and softens as you draw nearer. And just as you start to wonder When will I finally reach this knee-breaking monster?! you glance over your shoulder and see you are already half way up it. In no particular order, you cycle through feelings of joy, surprise, suspicion, relief and anti-climax. And by the time you are done with those, you've reached the very peak. Did you even climb a hill at all? The dizzying view behind you says yes indeed. But your body does not feel anywhere near the anticipated effects.

Such is the wondrous phenomenon that is the pseudo-wall. Some call it a false climb, for it is a climb that looks far worse than it feels. Possibly the effect is a visual illusion, having to do with perspective and limitations of the human eye. Like when we see a huge setting sun and excitedly snap a picture, only to capture a tiny spec. It can also be that we underestimate our momentum on approach, which proves sufficient to carry us over the steep parts. But no matter what we call it and how we explain it, what a rush it is to know, when we see the thing ahead and recognise it for what it is, that we can conquer it with relative ease despite its menacing facade. Once familiar with the pseudo-wall, we storm it with fearless confidence. And it is then the new riders who steal glances at us and wonder how we can be so calm when heading toward that thing.

In that implicit, visceral way that bypasses rules and checklists, we learn to recognise the pseudo-wall, to tell it apart from hills that will truly feel brutal. We get quite good at this over time. But on occasion, mistakes are made. Unlucky is the cyclist who encounters the False Pseudo-Wall. Doomed is the cyclist who attacks it blithely, only to feel their speed and energy drain so quickly it leaves them breathless even before the pain hits, even before the cold panic of having misjudged their gearing sets in. Having witnessed cyclists fall prey (literally falling over, having failed to downshift in time!) to the false pseudo-wall, I will never underestimate its sinister ways. With respect I eye every new looming hill, for their power to surprise is awesome.
Labels: hills roadcycling