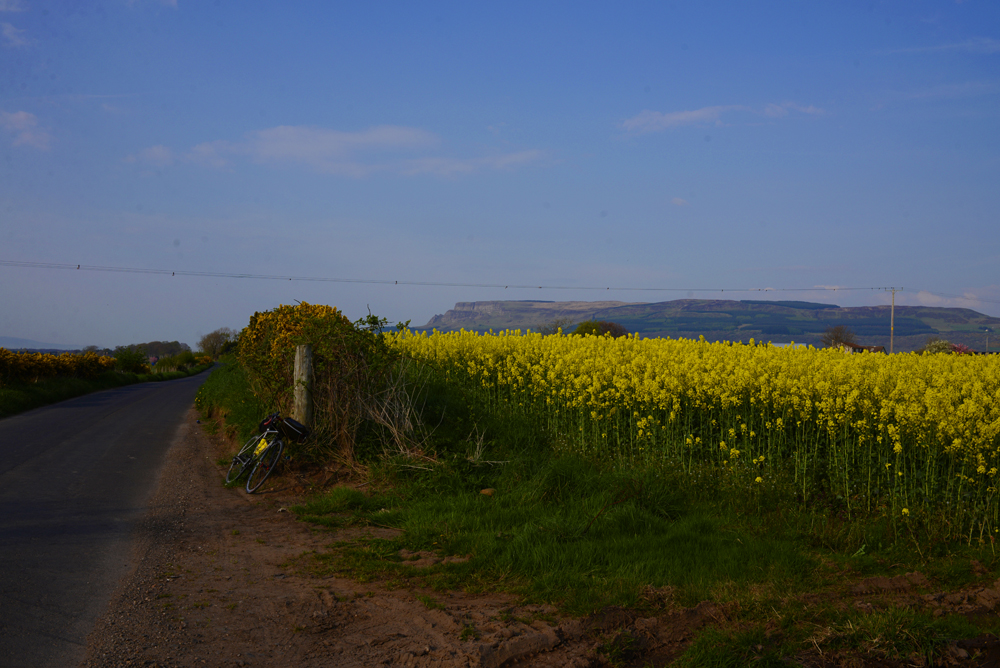 Cycling the maze of Roe Valley's coastal farm roads, everything in early May is yellow. The dark golden warmth of thorny whin hedges borders the lemony coolness of rapeseed blossoms, and together they're fringed by generous sprinklings of matte creamy buttercups. Rolling past these swells of subtly-altering yellowness, I realise that I can parse out the plants, even from a distance, by more than just their hue. I can smell them each individually, even before I can see them. Coming around the bend, the honeyed scent of the whin flower heralds a prickly wall of yellow ahead. Strange, since I can't ever seem to smell this plant off the bike - even if I walk right up to the hedge and sniff the flowers up close.

It is not only flowers that smell more strongly from the bicycle. On sunny mid-mornings I pick up on scents of freshly washed laundry hung out to dry.

In the evenings the smells of peat fires being lit and dinners being cooked taunt me as I hurry hungrily home in the rapidly cooling air.

I can smell horses and farm animals, and other warm farmy scents, and increasingly I can tell what exactly they are.

I can smell the sunbaked stone of village centers and housing estates.

And the damp, musky stone of dilapidated structures reclaimed by new growths of forest.

In the distance, but sometimes up close, and sometimes beneath me over a cliff's edge, I can smell the sea, with its salty slimy growths, pale grasses and petrified shellfish.

I can smell the rich soil.

I can smell the coming rain.

I can smell that exquisite sentimentality up at Ballyhacket mountain at dusk that is probably moss and peat heated up by the slow-burning sun, then released in subtle vaporous doses through the evening hours.

It is reasonable to assume that this heightened awareness of scents comes from being outdoors, not enclosed in a car or building. But I think it goes beyond that. After all, my sense of smell on the bike seems keener than when merely lounging outside or walking. It also seems to grow stronger the harder I go, the more I exert myself. A friend has noticed this in himself as well, and his thinking is that cycling - with its strain, its focus, its heightened appetite, and its reliance on intuitions - sharpens the senses, making the rider more animalistically attuned to the layered nuances of scent. After hours on the bike, pushing their limits, the rider is no longer simply a person on two wheels. No, something is added in the process. Slowly the rider is transformed into an altogether different animal - one that is gifted with a richer and deeper olfactory experience. The effect may only be temporary, but the memories and secret knowledge it leaves us with remain ours forever.
Labels: countryside flowers roadcycling