The Story of Sleeve Boy 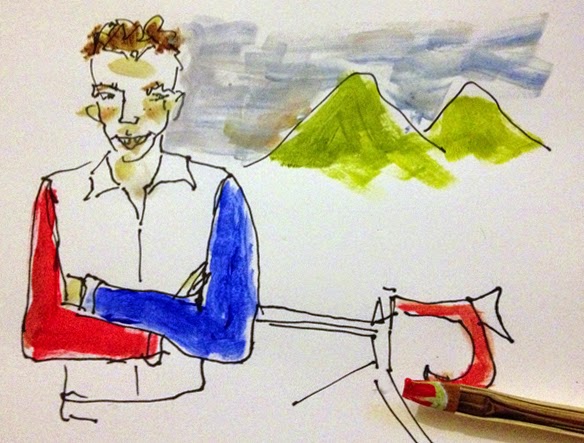 Taking my morning constitutional over the Sperrins, as is my custom, I turned up a mountain road just past the village of Claudy and caught, from the corner of my eye, a glimpse of a sign. It was a sign for Sleeve Boy Park.

Who is this Sleeve Boy, a curious traveler might ask, and why is a park named after him?

Ah. Well, that is a local legend.

Once there was a boy. And this boy loved to go to the park. But this boy, you see, he was very poor. So poor that he owned only one shirt, its sleeves worn to tatters from years of work on the family farm.

In the olden days, things were more uptight than they are now. To be admitted to the Country Park for a stroll one had to dress respectably. And after weeks of eying the boys' ragged sleeves with disdain, one Sunday morning the attendants finally shook their heads and refused him entry.

"What's the matter?" asked his older sister. But when the boy told her, she only shook her head and frowned unsympathetically. "Serves you right for wandering around parks when there's work to be done here."

"What's the matter?" asked his little brother. But when the boy told him, he only giggled and gave his sleeves a tug, tearing them even further, before running off.

"What's the matter?" asked the boy's mother. Reluctantly he told her. The woman scratched her head in thought. "Sure I have some sleeves saved up from your father's old shirts," she finally said. And she pulled out a great big basket filled with scraps of old clothing. She fished around in it and soon enough retrieved two perfectly good sleeves without a single hole in either. Problem is, one was red and the other blue. Meanwhile, the boy's shirt was white. "No law against that!" she said, and gestured for her son to hand over his shirt. Before he could muster a word, she was already busy at the sewing machine. Off came the old, tattered sleeves. On went the intact ones. Finally she presented him with the finished garment and pushed him out the door.

Never had the park attendants seen such a sight. A young boy in a shirt, white and freshly laundered. Only one sleeve was made of red flannel and the other of blue linen. They did not like the look of this nonsense one bit. But the boy was clean and his clothes weren't torn. They had no choice but to let him in.

That day the boy played in the park to his heart's content - chasing butterflies, sniffing daisies, and feeding squirrels till sunsent. And every so often thereafter, when his sleeves would grow worn and ragged again, he would come to his mother and she would replace them with newer sleeves from her basket of scraps. One month you could spot him in sleeves of pink and yellow. The next in sleeves of green and violet. Sometimes one sleeve would be checkered or polka dotted, and the other plain. Who could tell what would be found in the scrap bin!

From that point onward, the young boy became know as Sleeve Boy. Everyone in the county recognised him from miles away, delighting in his unique appearance. Fellow villagers would even come and give him their old sleeves, so that he might continue visiting the park.

That winter, the fortune of Sleeve Boy's family began to turn. Their struggling farm did well for the first time in years. "Let's go to the city and I will buy you a stack of new shirts for your birthday," offered his mother. But so accustomed now was Sleeve Boy to his look, that he did not want new shirts. Instead, for his birthday he asked for a bicycle. He rode this bicycle every day and soon enough began to race, distinguishing himself not only by being the fastest boy around, but also by his striking attire. "Go, Sleeve Boy, Go!" shouted the spectators at the races. It was always clear which one he was. Soon, the big teams came calling and the sponsors, and before long Sleeve Boy was a famous bicycle racer in the distant land of Italy. And after an illustrious career, he moved back to his old village and made a generous donation toward the preservation and upkeep of the local Country Park, on the condition that all children - rich or poor, smartly dressed or unkempt - were to be allowed in at all times. Many decades have now passed, the park since renamed in his honor. Such is the happy tale of Sleeve Boy.

...Or at least could have been. In fact, "sleeve boy" is the anglicisation of the Irish sliabh buigh, and as such means nothing like what it sounds. But it is stories like this we tell ourselves on a 7 mile climb, to keep our minds occupied and to keep ourselves sane when our legs already feel heavy with still 80 miles to go in this final long training ride before that Event we hadn't fully committed to until This Very Moment.