Of Miles and Mountain Vistas: A Spring Initiation Ride 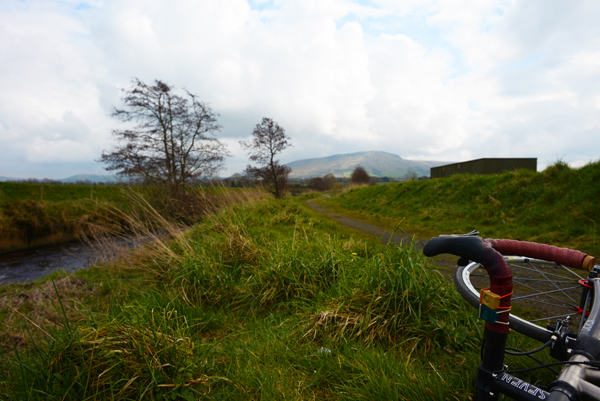 Having told myself I would not stop until at least ten miles in, it worried me that I was already tired so early into the ride. But when I rolled into the center of Burnfoot - with its view of the Pointy Mountain and its titillating village shop selling 60p sausage rolls - I saw it was mile 15 already. Somehow the time, or the distance, or both, flew faster than I realised. So far so good for the first big ride of the season. With my piping hot sausage roll and electrolyte-laced water, I sat by the stream and took in the landscape that spread out in front of me. It looked far. And it was where I was headed.

I've tried not to whine about it too much. But, as far as road cycling goes, winter in Northern Ireland was disappointing. Because it rarely snows here, I hoped to ride year-round without breaking stride. But the powerful winds put a damper on that. From mid December through a good part of March, I was lucky to get out once-twice a week, and even then for 20 or so flat miles at a time. I had not done any significant hills or milage since before the winter holidays. When finally the weather turned enough for proper cycling to commence, the expression "Two steps forward, one step back" came to mind. I panted up climbs and panicked down descents that I had come to think of as easy by last summer's end. Good thing I did not start with the intermediate ones! 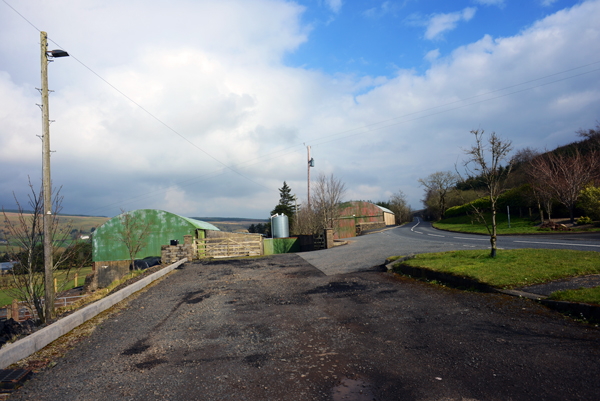 Last spring I worried about working up to longer rides and even put together a training schedule. This year I did nothing of the sort. The feeling of readiness happened organically. One day I just knew: Tomorrow. I sat down and planned the route, a meandering 60-odd miles along the shoulders of a couple of local mountains, through the villages of Drumsurn and Garvagh. The route would begin with some flat miles, followed by a warm-up climb, then two long climbs and descents, before turning flat again for the final stretch home. I designed it mostly along back roads and to maximise mountain views. The climbs were a side-effect of that, rather than the objective. Still, I saw this ride as a sort of jump-start to the season, as a shot of adrenaline, as something to shock my system and jog my body's memory, to establish a reacquaintance with the miles and the climbing. As part of this spring initiation rite, I accepted that, along with the beautiful views, some degree of pain and misery awaited me. 15 miles in and already tired, I braced myself for what was to come. "This will be difficult. But get it over with, and future rides will be more enjoyable." 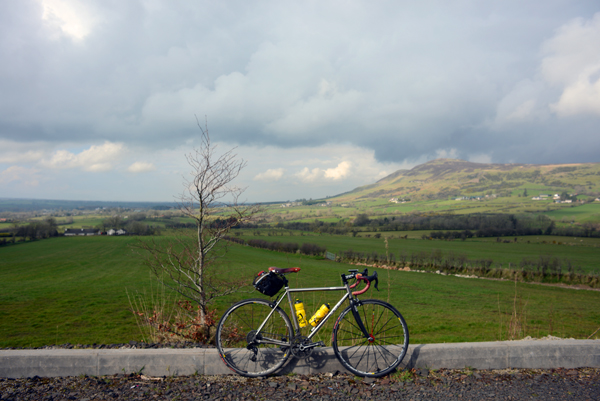 But as flat roads gave way to rolling hills, which gave way to the first real climb, I began to feel better, not worse. Somewhere from deep within, an energy emerged, as if out of winter hibernation. The energy did not come in bursts, but seeped out in measured doses, at once calming me and waking me up. The eight mile climb along Legavallon Road wasn't difficult. It just Was. It didn't hurt or feel miserable. It was merely slower than a non-climb. And this slowness was a welcome one, affording plenty of opportunity to study the valley that spread out to my left more dramatically with each foot of elevation gain.

They call this part of the country the Legavallon Pot. Cycling up a mountain ridge in Drumsurn rewards with a dizzying view of a round gap, green with pastures and milky with low cloud, like an enormous bowl of matcha. Interestingly, the official observation point does not show off this feature of the landscape particularly well. But the stretch of the road that does is awkward to stop at. The best way to observe it is from the bike itself, rolling through the view. 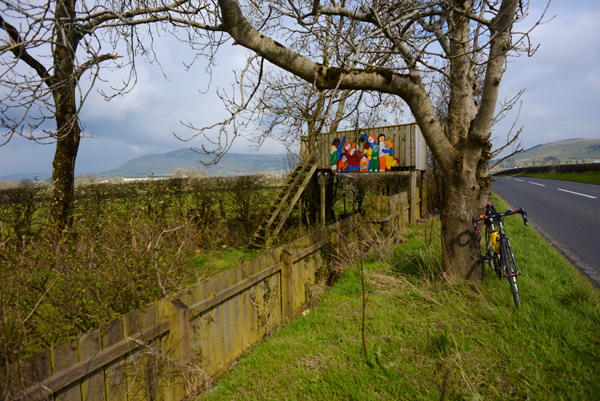 In addition to the natural landscape, the country roads that criss-cross these hills are full of fascinating oddities. My favourites are the mysterious murals in the middle of nowhere. 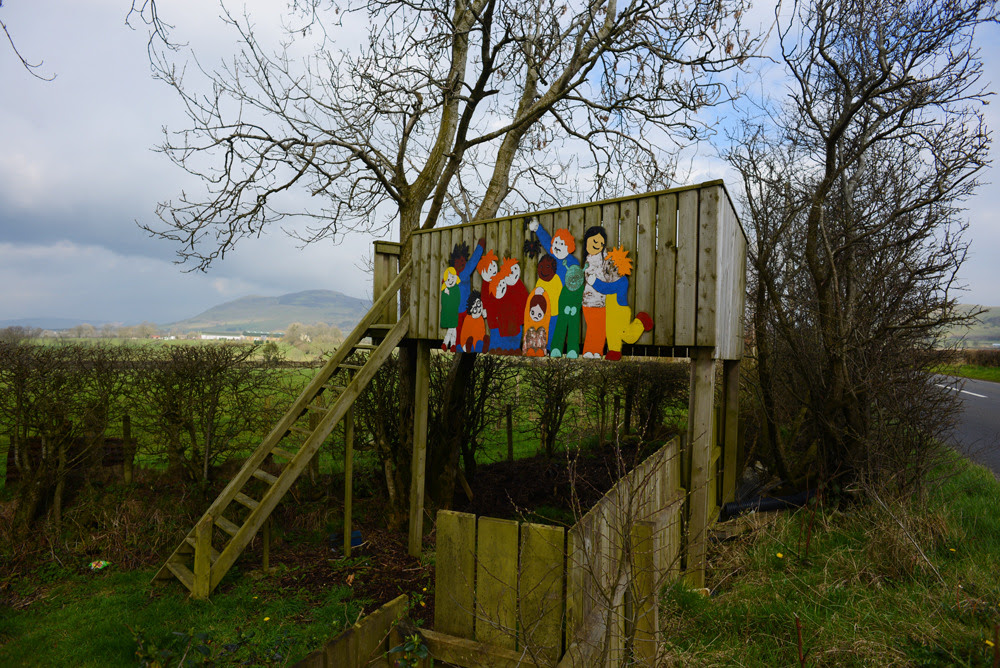 Here a boy dangles a giant spider over a group of other children and one green alien, who respond with an impressively realistic variety of emotions. Some look amused by his antics. Others are terrified. Others still appear aloof, or saddened by being on the sidelines of the game rather than at its center. I thought it a nuanced portrayal of child group dynamics. The tree house and mural were not near any sort of residence or child care center, as far as I could tell. 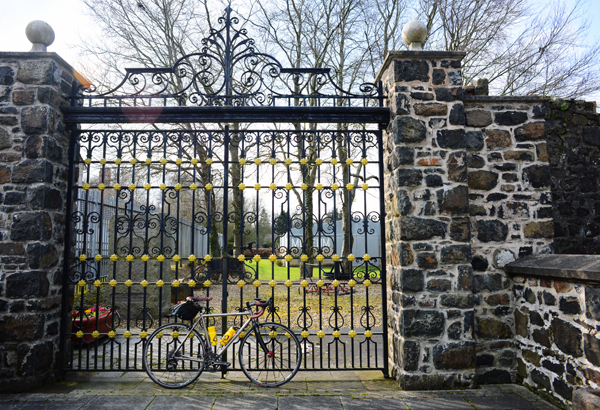 The village of Garvagh is an old one and deserves a post dedicated to it exclusively. While tiny, it boasts a surprising number of attractions - including a forest, a museum, its very own pyramid, and a history of vampirism. But on this occasion, I was more interested in its eating establishments. I stopped at a fish and chips shop and ate a late lunch as school children in their uniforms descended from buses, staring at my bike and attire with undisguised curiosity. Allowing for the school run traffic to die down, I set off for home. 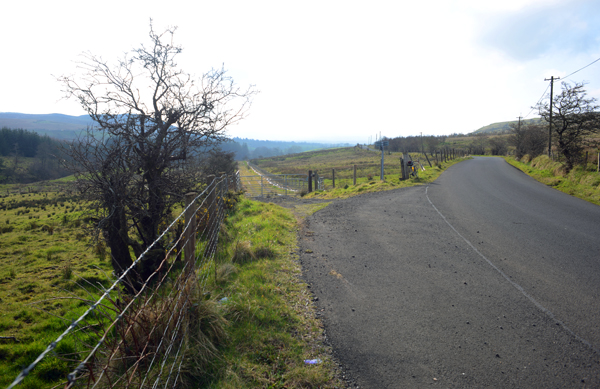 The second big climb was on the return leg and steeper than the one before …which, when I noticed this fact, made me think of Pamela Blalock and her signature rides. She is known for, shall we say, throwing in some wake-me-up hills at the end of a long ride. And while at first I dreaded this, eventually I not only got used to it but began to look forward to it, feeling disappointed if a ride did not feature a good so-called Pamela Climb at the end.

With a mental salute to my friend, I cycled up the mountainside appreciatively. My legs, however, were now growing heavy and I could sense the wilting point on the horizon. It also grew unseasonably warm, and soon I was sweating under my jacket. But seven miles later the descent came, and with it the cooling rush of breeze against my face and chest. The mountain views ahead grew dense and layered, like overlapping bits of construction paper in subtle shades of slate blue and lilac. Of course during the beautiful parts I was going too fast to want to stop for pictures. But seeing this landscape I made a mental note to return here via a more direct route soon, specifically to photograph it.

The descent went on and on. And to think that I had almost forgotten over the winter that dream-like sensation of falling. Now it came back to me in full emotional force. Miles and miles of plunging down a mountainside. On descents like this, the bike becomes something other than a bike. A flying carpet?

A day and a short recovery ride later, I still feel buoyed by the sensation of that last descent, by the rush of following the curves of the road while staring ahead at those layered hazy mountain ridges. That sort of descent really does feel like a dream. Or like a long swoon. The 60 miles and the climbing and the feel of being out of shape are not what I remember after this ride. Perhaps that is why I want to keep going further.
Labels: 100K hills Ireland ride reports roadcycling