Non-Holiday Romance… Fumblings with the Budnitz No.5 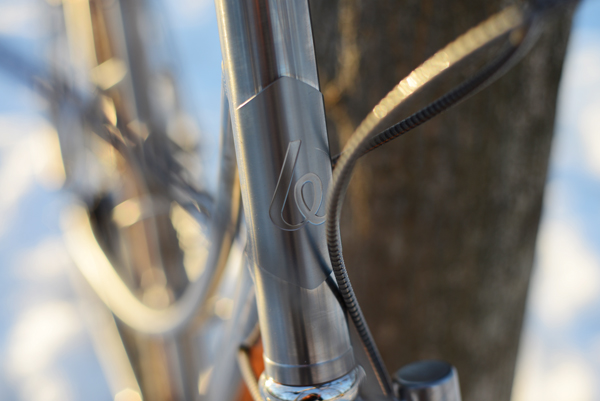 To a monolingual English speaker’s ear the name Budnitz might not evoke any particular associations, other than a vague sense of Eastern European linguistic origin. But to an ear attuned to tongues from said region, the association is an interesting one. The name is formed around a word that might be translated as “weekday,” or “non-holiday.” In Russian, for instance, a budni den is an ordinary day, a workday. And while budnitz is not an actual word in any language I know of, if it was it would mean something like “weekdayer.”

What to expect from a bicycle thus named? While so many manufacturers market cycling around a fantasy of carefree joyrides, here is one that – whether deliberately or not (after all, Budnitz is simply the owner’s surname; he might not be aware of its roots) – insists upon the reality of ordinary, everyday life. This filled me with great expectations. Expectations of supreme utility, comfort and durability. But also of a certain special something that would make transportation cycling feel so wonderful, so effortless, so pleasurable and fun, that the weekday would become the new weekend. Would I see anything of the sort in the bike I had been invited to test ride? 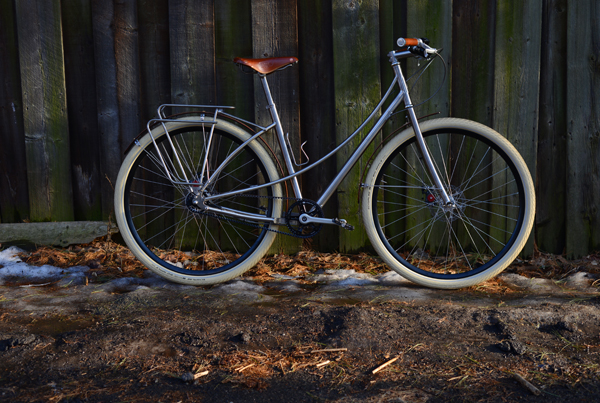 When I opened the door that wintry March morning, what I saw was almost too much to take in: a titanium swoopy mixte with fat tires, belt drive, disc brakes and wooden fenders. It was their new model, the No.5 – described as “the ideal step-through framed bicycle [defined by] elegance, grace, and speed.” Well, they got the elegance part, I thought, picking up my jaw from the ice-encrusted pavement.

The beauty of the Budnitz No.5 was doubly surprising, considering that (1) I don’t like the looks of any of their other models, and (2) it is tremendously challenging to build a mixte out of titanium tubing and with modern components that looks cohesive and elegant. But I have to hand it to Budnitz - they did it. The bicycle in front of me looked stunningly gorgeous to my eye. It was also full of interesting features. 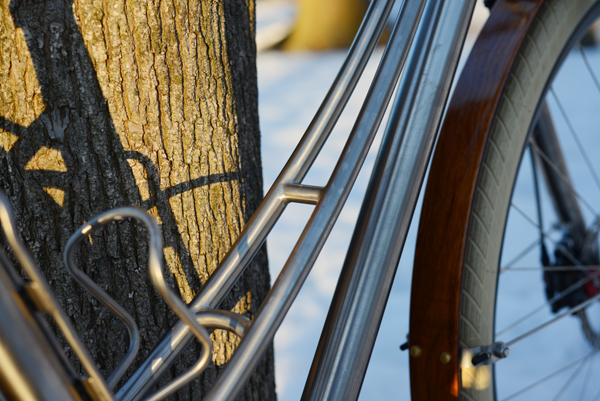 Not only was the curvy, twin lateral stay frame titanium, 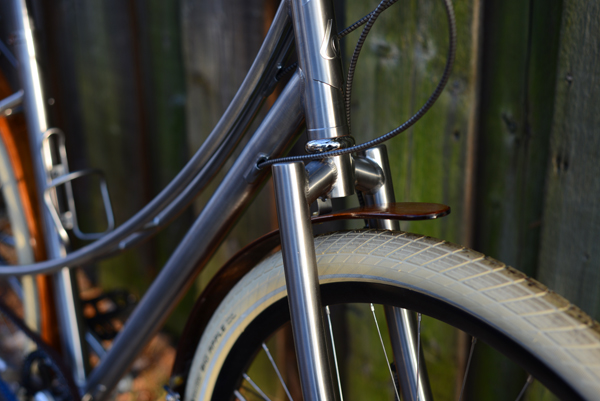 but so was the segmented fork. Most titanium frame builders do not offer matching Ti forks (you get a choice of carbon or steel instead), feeling it is cost-prohibitive to make them in such a way that they are neither too flexy nor overbuilt. So the Budnitz titanium fork is quite a rare beast. 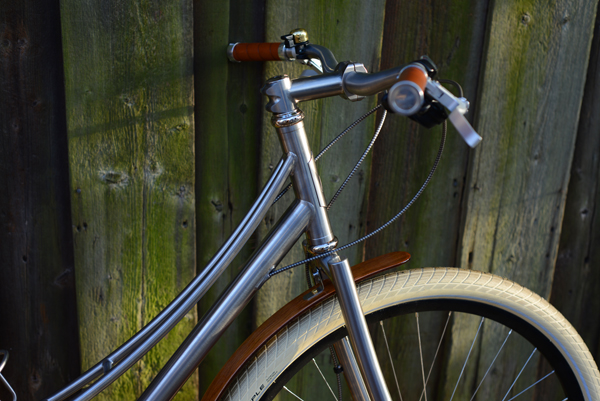 Also titanium are the stem, handlebars, headset, and seat post. All of these are proprietary, marked with the Budnitz name. 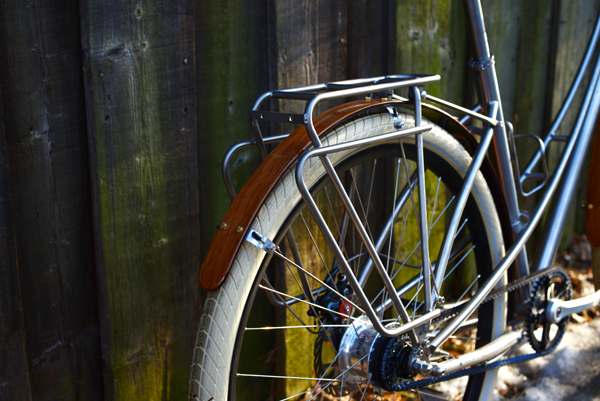 Finally, the elaborate Tubus rear rack is titanium as well - 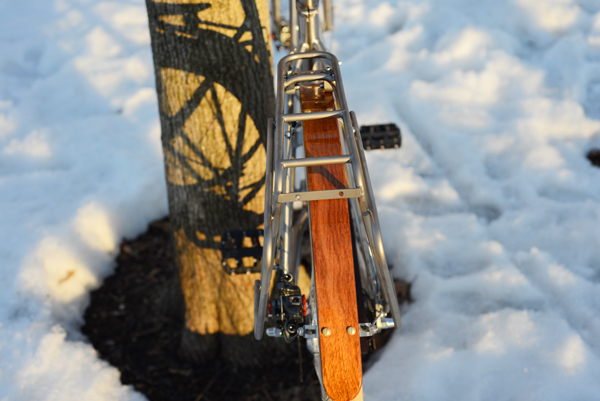 affixed slightly off center to accommodate the disc brake on the rear wheel. 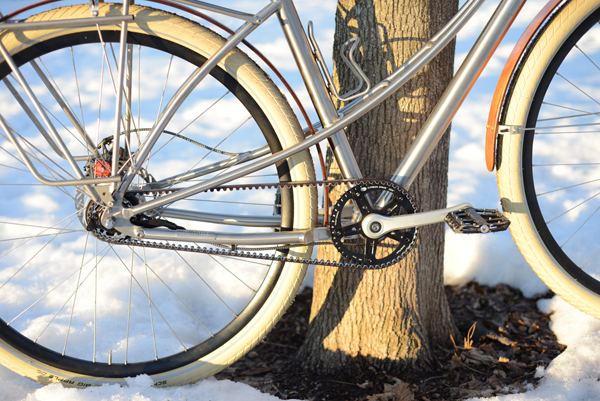 The other notable feature is the Gates belt drive, which came with a DaVinci crankset and an Alfine 11-speed hub. 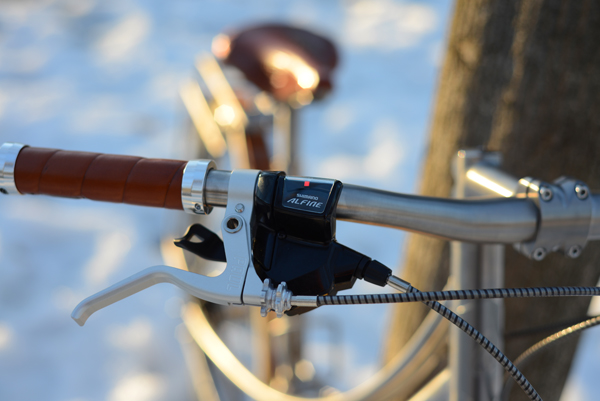 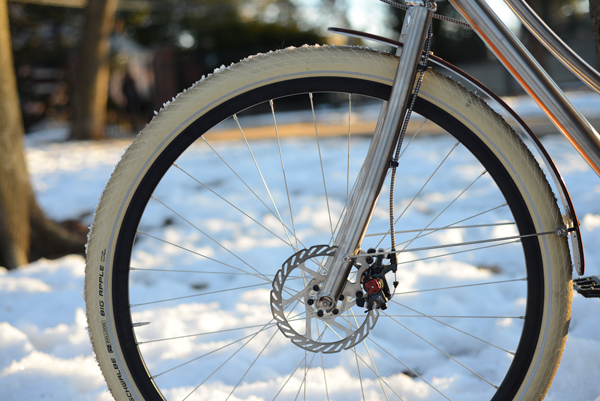 The cable routing for the brakes and shifters is quite elegant, routed along the left fork blade for the front brake, then internally for the rear brake and shifter. 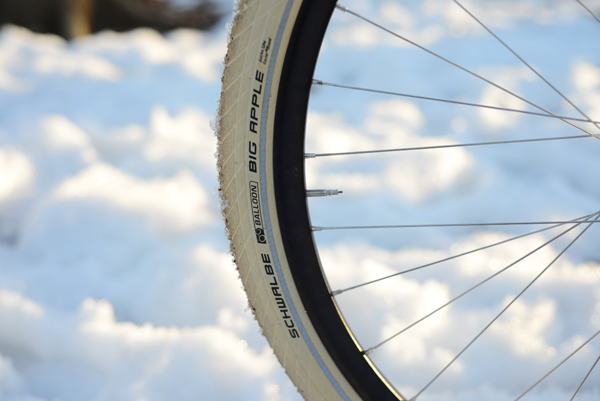 The Budnitz No.5 is a commuter bicycle based on a 29er mountain bike design. The (700C equivalent) black-rimmed wheels sport fat Schwalbe Big Apple tires in cream. 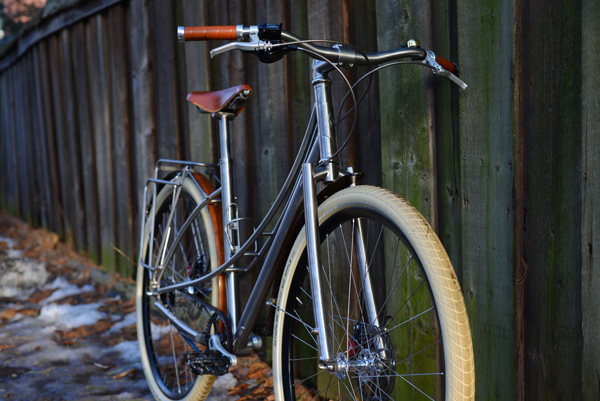 The lacquered wooden fenders are a nice match for the caramel Brooks saddle and leather grips. The warm brown of these accessories complements nicely the unpainted matte titanium frame, silver and black components, and cream tires. Overall the bicycle looks impressively clean and neatly put together, despite the heady mix of components and accessories.

When a certain other blogger reviewed a Budnitz bike a couple of years back, I recall he complained of shoddy assembly. In fairness to Budnitz, I should note there was none of that with my test bike. Over the 2 week period this mixte was in my possession, everything functioned smoothly and silently - they did an excellent job. 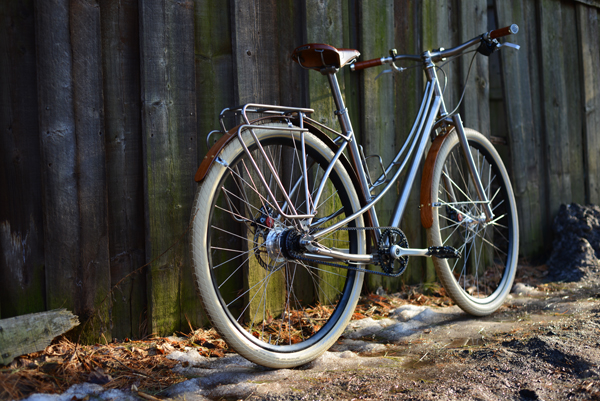 So what we have here is an all-titanium transportation bike with a low standover, fat tires, strong brakes, low-maintenance (allegedly) belt drive, a gazillion of high-end modern features - and it's beautiful to boot. What's not to love?

Well, for one thing, there is the weight. For a bike with such an impressive mix of titanium and other nice components, I found it to be remarkably heavy (over 30lb, I would estimate). While this figure is very reasonable for a store-bought city bike, considering the cost of the Budnitz (over $5,000 for the build as shown) and the care taken to source lightweight parts, I would expect it to be much, much lighter. For comparison, my personal steel mixte, outfitted with 650Bx42mm tires and mostly midrange aluminium components, weighs noticeably less - and that's including dynamo hub, lights, big front rack, and kickstand - all of which the Budnitz lacks.

Neither did I find the No.5 especially fast compared to ordinary upright city bikes. It is a comfortable bicycle for certain, the combination of titanium and those fat Big Apples ensuring a wonderfully cushy ride quality. But I would not say speed or maneuverability are its strong points. The combination of the big wheels and fat tires felt clumsy - a bit like riding a monster truck. And when pedaling, I just couldn't seem to get into that groove where I'd feel a direct translation of my pedaling efforts into the bicycle's forward movement. Cycling up hills was a particularly tedious ordeal, no matter what gear I switched to on the 11-speed hub. Again, I do not mean to suggest that the Budnitz was unusually slow for a city bike. But it didn't have the kind of light, sporty feel that I would expect from its price tag, description and materials used. 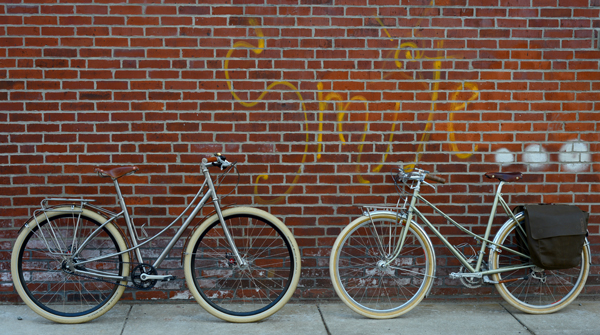 Finally - and, granted, this part is the most subjective - I could not get comfortable with the fit of the Budnitz. Despite the mixte frame design and mountain bike inspired geometry, it fits almost like a Dutch bike. The Medium sized frame, described as appropriate for my height, felt simultaneously too big and too small - the headtube extended so high, it was impossible to get the handlebars as low as I wanted them, yet the virtual top tube on the shorter side of what I would normally ride. Going down a size would be much too cramped, and the larger size would be even more upright. The high bottom bracket is also something I don't care for on a transportation bike. You can see how much higher off the ground I need to be on the Budnitz compared to my own bicycle to achieve decent leg extension. And then, there is the toe overlap - which is considerable and impossible to ignore; I would hit the tire with my toe every time I'd try to make a U-turn. To each their own, but the fit and geometry of this bicycle did not suit me. I should note, however, that switching to 650B or 26" wheels could solve most of these issues - has Budnitz considered it, I wonder? 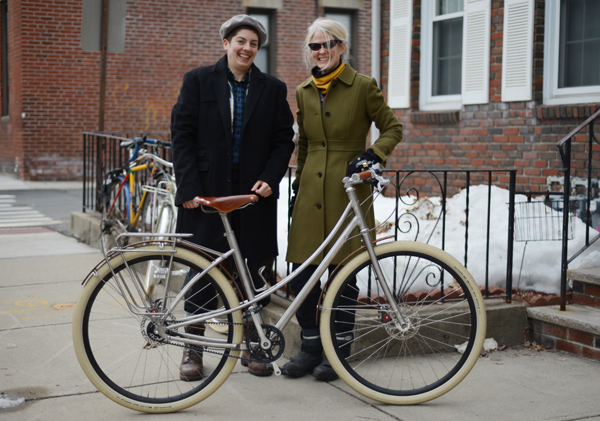 Given how much I liked the look of the Budnitz, and the idea of a fully equipped titanium transportation bike in general, I felt badly about my less than enthusiastic response after test riding it. So I asked a few friends to take it out for a spin as well. A total of 4 others rode it, including Emily and Pamela pictured above. The other test riders were less critical of the speed than I was (although their test rides were much briefer than mine). But all of them commented on how surprisingly heavy the Budnitz was, as well as on the dramatic toe overlap. 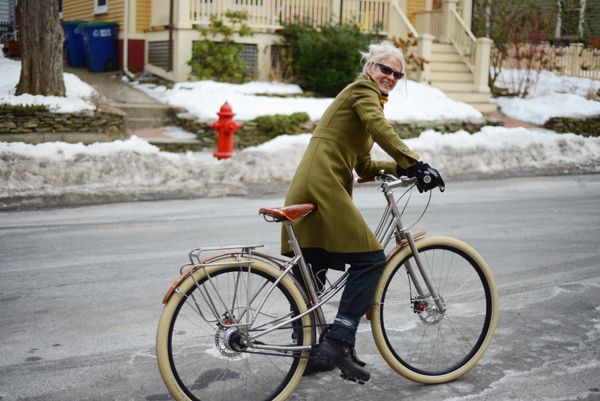 Pamela also noticed that her foot would hit the bottle cage (mounted on the seat tube) when she'd step through the frame - something that I had experienced as well, but forgot to mention. In fairness, with step through and mixte bicycles the decision of where to mount the bottle cage is tricky. Put it on the downtube, and it can be too low for comfort. On the seat tube and you can kick it when stepping over. 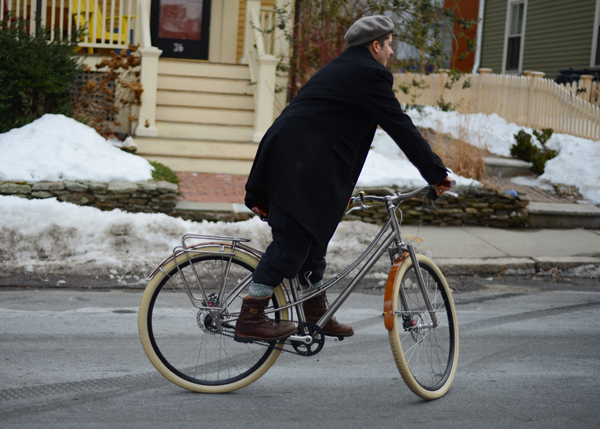 And one thing Emily pointed out, was that the Budnitz was more difficult to track-stand - in particular no hands - than other bicycles she's ridden. Buyer, beware! 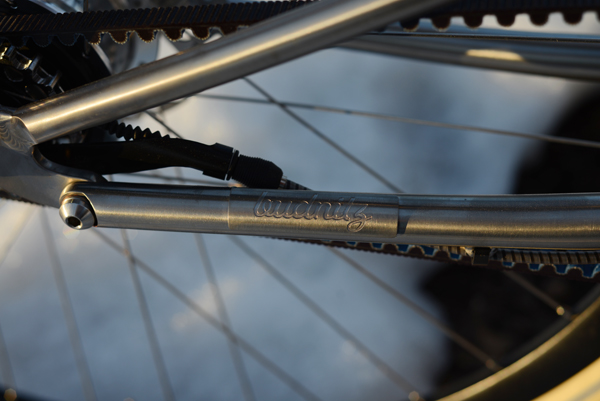 Jokes aside, I've tried to share my impressions of this bicycle fairly. When people discuss Budnitz Bikes, the issue of price point tends to be hotly debated. In theory I do not have a problem with a $5,000 titanium transportation bicycle. Manufacturing costs for small-batch projects are high and titanium as a material is expensive; this price tag - or higher - is pretty much to be expected. To manufacture their bikes, Budnitz (a Vermont-based company) works with a Taiwanese framebuilder who specialises in titanium, and is particularly equipped to bend Ti tubes according to their specs. The complete bicycles are then assembled in Vermont and sold to customers directly. I like the idea of a well thought through, made-to-last titanium bike for transportation, and I've reviewed a couple of others in the past (see here for instance). The Budnitz No. 5 is a beautiful bicycle, but, in its current iteration, not my cup of tea.
Labels: bicycle reviews test rides titanium