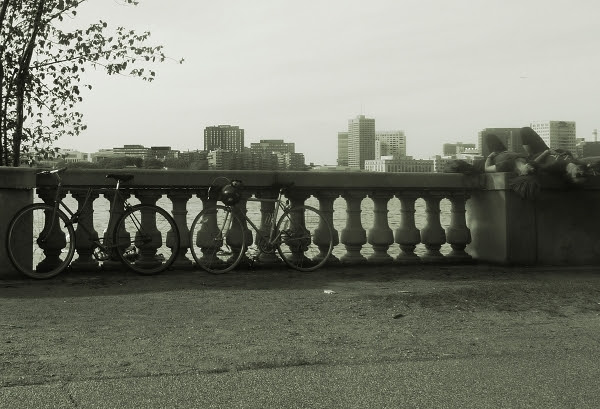 The man was clean cut, of late middle age, and looked not unlike one of our teachers. But his expression of friendliness was too studied and strained. As he made his way to our bench in the shaded part of the park we instinctively put down our sandwiches and stiffened our postures.

"Umm..." I could see K's face twitch and turn red. She was born in Connecticut.

In the seconds of confused silence, he sat down next to us and leaned over chummily.

"Nice day!" He made a show of looking up at the sky, then glanced around furtively.

"Excuse me, but we came here to have a private talk..." I said this as friendly as possible, wile my eyes searched for passers-by.

"Hey, and what about you honey? French? You got a bit of an accent there."

I attempted a discouraging glare, but he continued.

"Polish? Knew a girl looked just like you once and she was Polish. Nice girl, very mature for her age. Strict parents though. Do you girls have strict parents?"

In the moments that followed I could almost hear the wheels turning in all three of our heads, crucial calculations taking place as the breeze tussled the leaves.

In unison, K and I stood up.

We didn't run, but, leaving our lunches on the bench, moved quickly and with precision toward our bikes - rusty things propped up against a tree. Then we grabbed them, hopped on and pushed off just as the man's face contorted into an agitated snarl and he lunged after us.

Safely out of reach we could still hear him yelling.

"I got a car you know! Gonna go after you all the way to your house!"

This made no sense, but nonetheless terrified us into riding circles around the neighbourhood for hours before going home. It was the summer after 8th grade and never had we been so glad to own bikes.

This was not the story I meant to come up with on Women's Day, but it popped into my head. The bicycle as escape tool. Not often talked about, but it has served that function for me and countless women I know.
Labels: holidays stories