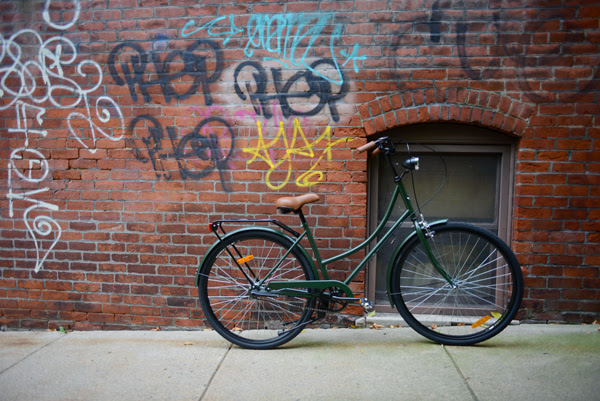 In cyclist jargon, to refer to a bike as a "beater" is to describe a machine that is so weathered, so cheap, so ugly - or, ideally, so all three of these things - that you do not care about wrecking it. Sure you might have your nice bike. But it's the beater you leave out in the rain for days, ride on heavily salted roads,  lock up outside bars in dodgy neighbourhoods, and generally subject to all manner of abuse. Because who cares - it's a beater. On this concept a Canadian company has based an entire line of city bicycles, named …drumroll… Beater Bikes. For $350 a pop you get a single speed roadster, either diamond frame or step-through, equipped with a surprising amount of commuter accessories. 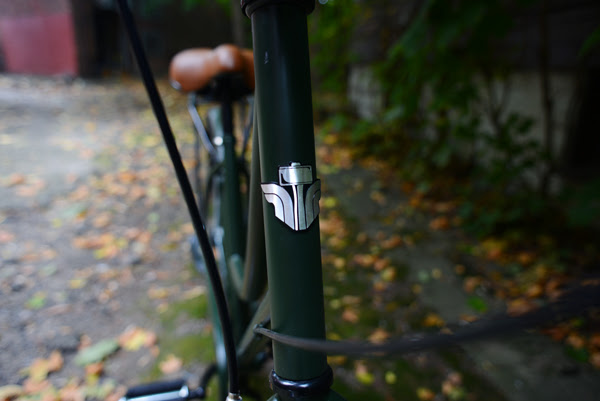 But what sort of creature is this Beater, with its hammer-head tulip headbadge and krylonesque paint job? The Bicycle Belle in Boston carried them briefly, which gave me a chance to try one. And you know what? By golly, I liked it. The Beater is not without faults, but as far as "budget bikes" go, it seems hard to beat (heh) and has now replaced the KHS Green as my favourite bike of that category. 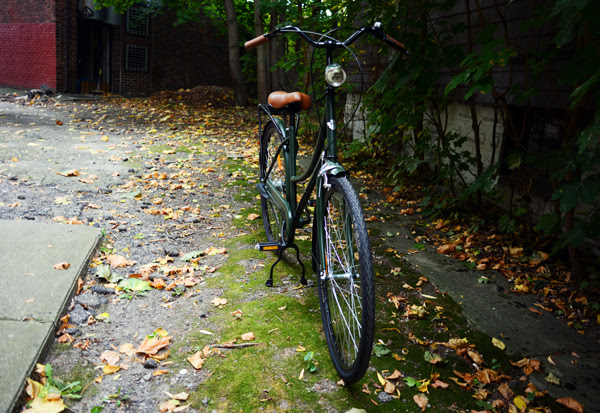 As far as the basics, the welded frames and forks (described as simply "steel") come in one size only (53cm for the diamond frame and 45cm for the step-through) and one colour - matte racing green. The loop design of the step-through is attractive, in a subdued industrial sort of way, with nice even curvature, clean welds and a unicrown fork that blends in well with the frame. Aesthetically, the bike looks simultaneously classic and modern, with a subtle dystopian undercurrent to it. The all-black components (rims, crankset, stem, seat post, handlebars) complement the matte green frame finish and, combined with the iconography of the headbadge, give off a futuristic and vaguely sinister vibe. Not in a bad way. It's an interesting juxtaposition, with the bike being so vintagey in concept. Loop frames can come across as too cutesy, but the Beater does not suffer from that. The complete bike weighs under 30lb, which is pretty good for an all-equipped city commuter of this style. In addition to the single speed, a 3-speed version is available for an extra $100. 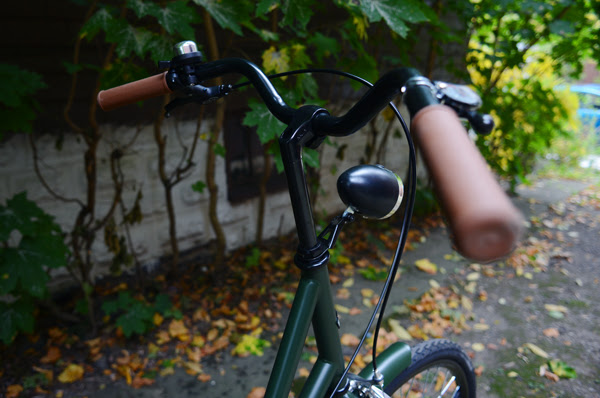 On the step-through model, the headtube is extended past the seat tube considerably, and the stem is extra long to allow for a super-upright posture. For someone of my height (just under 5'7") or taller it is also possible to adjust the fit so that handlebars and saddle are level, for a sportier position. 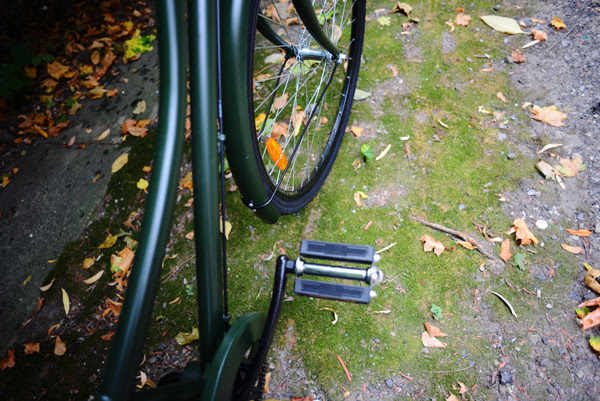 I like the proportions of this bicycle. It is compact compared to a genuine Dutch bike, but the "cockpit" does not feel cramped. And as far as the Beater's ride, I thought it a very normal-feeling, unremarkable (in a good way), stable bike that beginners would feel comfortable on, but experienced cyclists would not find limiting - as long as they don't expect performance beyond the city-bike category. The ride quality is not as plush as that of some others I've ridden, but it's not harsh and is better than I would expect at this price point. The bottom bracket is not too high, so it is possible to put a toe down at a stop while remaining in the saddle and still get decent leg extension when pedaling. And for me there is no toe overlap despite the 700C wheels with 38mm tires and fenders. 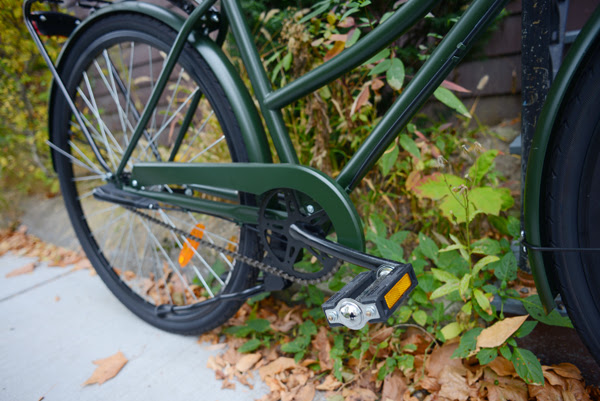 In addition to the fenders and chainguard, which are colour-matched to the frame, 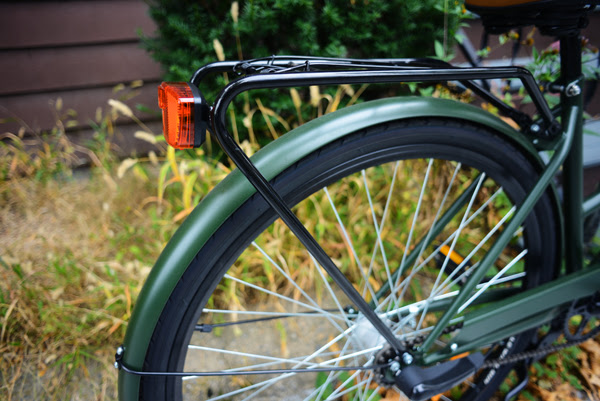 the Beater comes equipped with a rear rack, 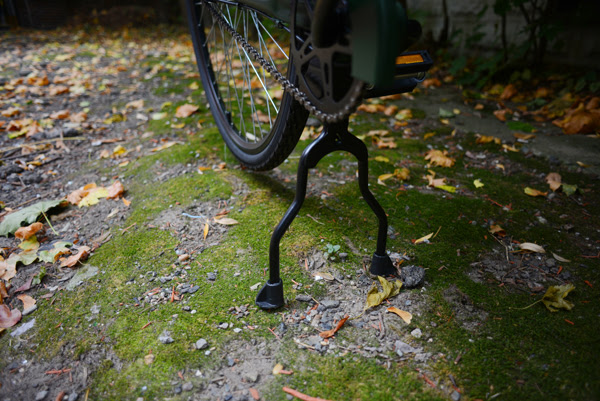 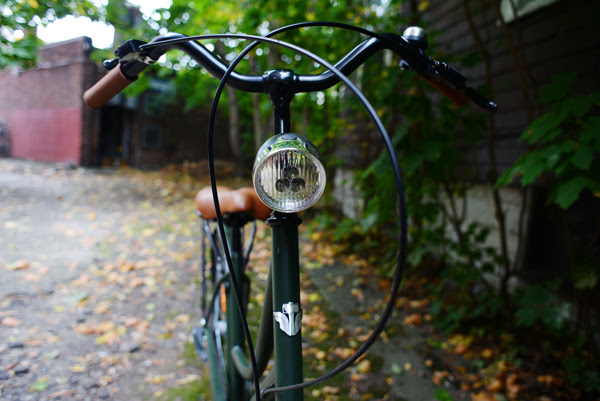 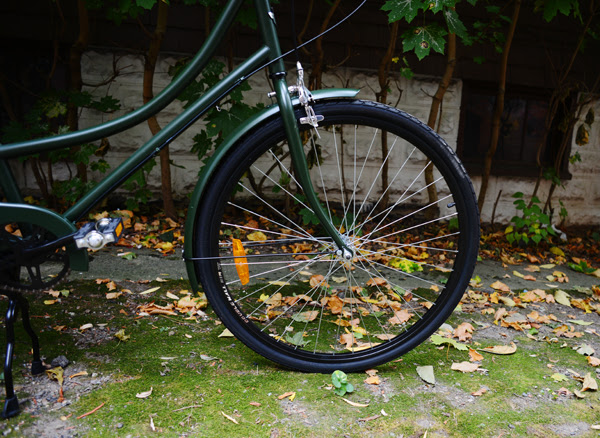 What it doesn't come with is a front brake. And therein lies the Beater's tragic flaw: It is coaster brake only. Now, I like coaster brakes as much as the next contrarian, euro-born, skirt-wearing, baguette-toting transport cyclist, and am prepared to debate their merits in my sleep. But even I would not make a bike that's meant to be ridden in North American cities coaster-brake only. I mean, come on, Beater - a pile of accessories but no front brake?.. Anyway. The proprietress of the Bicycle Belle was of the same opinion, which is why she retrofitted her entire stock of Beaters with front calipers before allowing them out the door. The good news is that this can be done aftermarket. The less good news is that it increases the bicycle's cost, thereby diminishing the wow factor of what would otherwise be a perfectly decent and ridable, fully commuter-ready $350 bike.

So, if I might be so bold as to make a suggestion to Beater: Why not nix the front wheel stabiliser (the cheap ones are no-good anyway) and replace the double kickstand with a plain old single one, then use the savings to fit the bikes with front brakes? (And to be honest, if catering to the North American market, a bike with front and rear hand-activated brakes in lieu of coaster would sell better still - but I am not versed on the cost difference that sort of change would entail.) 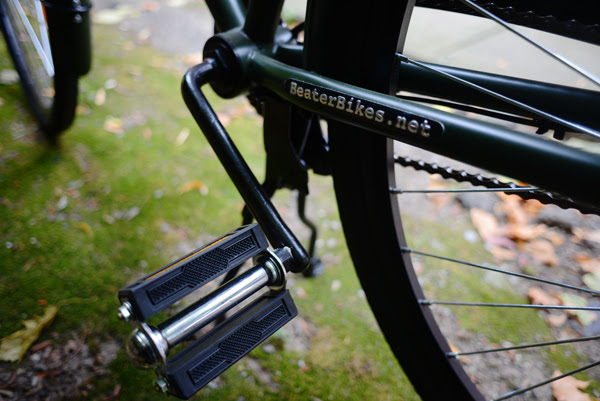 All things considered, I enjoyed riding the Beater. For the price point, I am impressed with both its design and with the accessories package it comes with. How well will a bike like this hold up in use is a question only an owner can answer - and if you are one of them please feel free to share your experience. Based on my limited impressions, I would recommend the Beater to readers searching for an off-the-shelf city bike for under $500 ...if it weren't for the manufacturer's choice of brake system.
Labels: 3-speed bicycle reviews budget bike step-through test rides