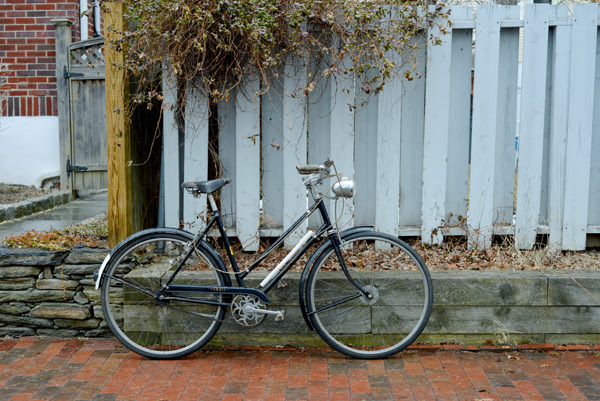 In the cavernous depths of Boston's Three Speed Hub, the humble black step-through looked like a garden variety vintage 3-speed. Smallish and plain of ornament it seemed downright unremarkable next to its freakishly collectable turn of the 20th century neighbours. But as I made my way past it, from the corner of my eye I glimpsed a little something that made me examine it closer - ultimately dragging it out into daylight. And there, by the creaking garden gate and under threat of rain, I stood and marveled at that deliciously bizarre feature that distinguished Humber bicycles from other English 3-speeds of its era. 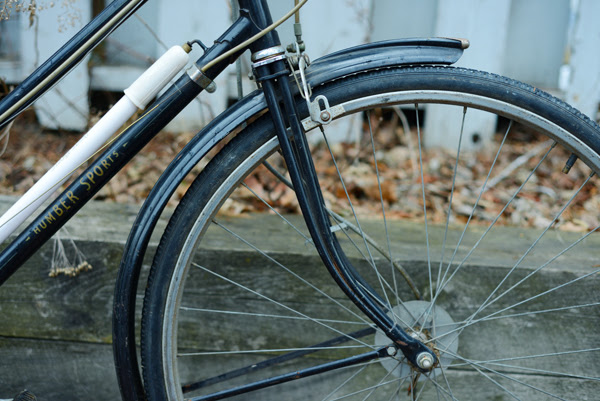 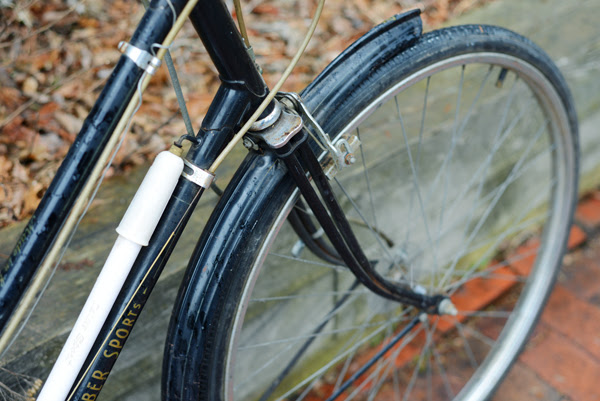 That's right. In leu of standard fork blades, Humber devised a fork with skinny twin blades on each side. 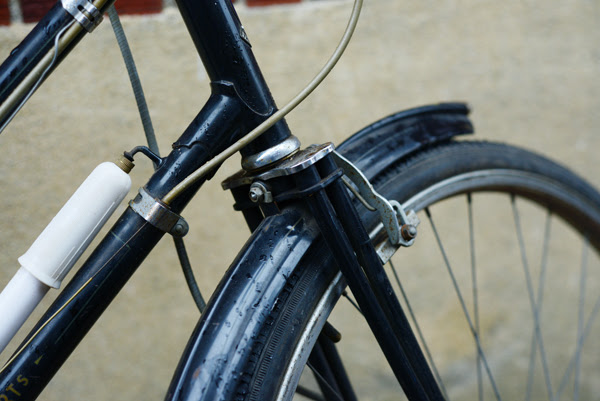 Brazed into a twin-plate fork crown at the top with a cm gap between them, they swoop down, 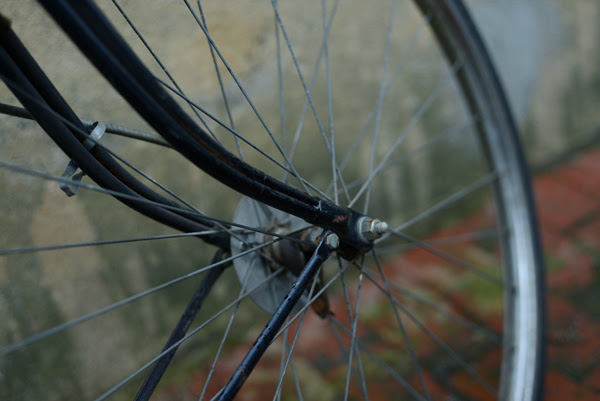 growing closer together toward the dropout socket. Exciting isn't it? Okay, so maybe I need to get out more …but still! I mean come on, they are twin fork blades! 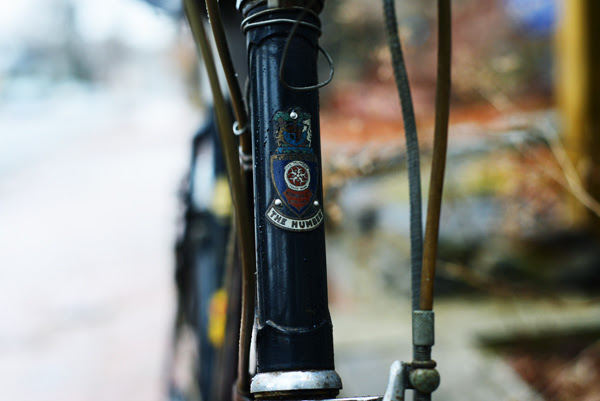 Founded in 1868 in Beeston, England, Humber Cycles were a brand that has always struck me as largely fictional. By the 1900s - when they began manufacturing bicycles as we know them today - original owner Thomas Humber had already sold the company and it was headed, as far as I can tell, by a marketing entity. 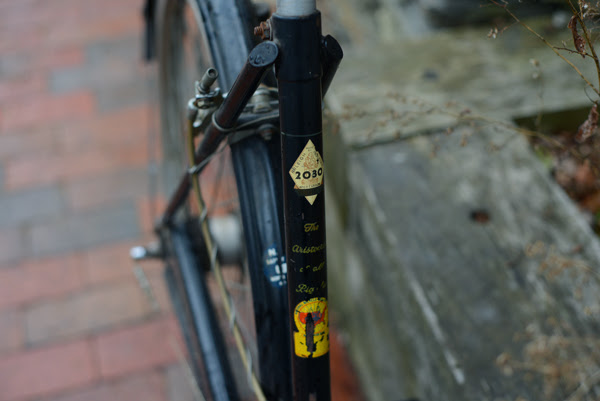 This could explain why, at a time when other bicycle manufacturers were making efforts to become more accessible to the general population, Humber boldly branded itself as "The Aristocrat of All Bicycles" (inscribed on the seat tube decal) - boasting a superior build quality and a plusher ride feel than its competitors. Naturally, these alleged advantages were reflected in the price. "Not cheap, but good," the adverts assured. 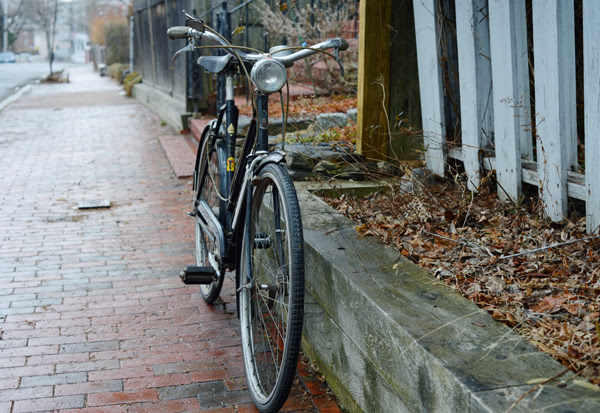 Having seen lots of Humber ephemera before ever glimpsing an actual bike, I've wondered whether perceptions of these bicycles at the time reflected the marketing message. After all, by 1932 Humber was sold to Raleigh, essentially becoming just another of its sub-brands. But when I asked this question in Northern Ireland, those who remembered the days when Humbers were sold in shops new, said that indeed they were considered high-end bikes and valued as such. And although owned by Raleigh since the '30s, Humbers were always made according to their own design - including the unique Duplex Fork. 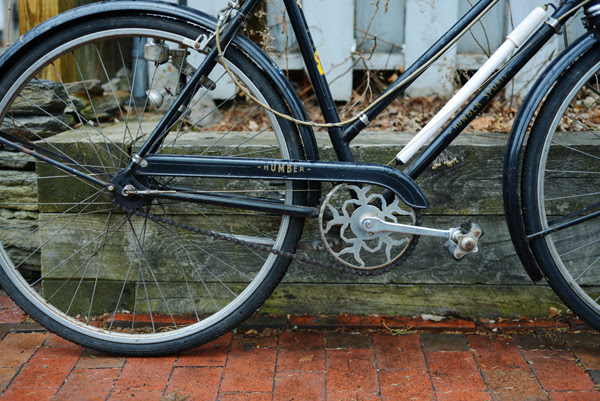 Another distinguishing feature of the Humber is the Maypole Chainring - a ring design that features 5 dancers in a circle, presumably around a maypole. It is not clear where this design came from. Recently, a Wheel of Life plaque with a more detailed, relief version has been put up on Humber Street in Beeston. 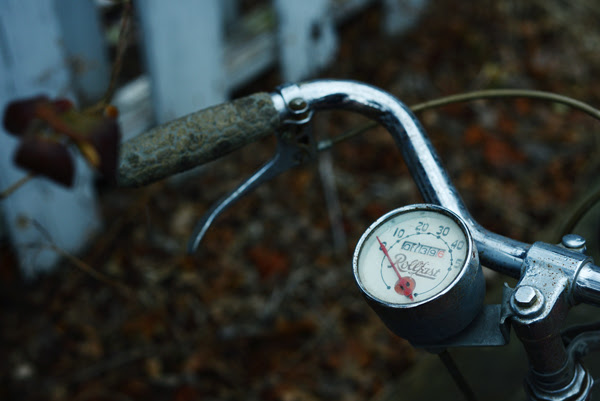 That aside, this specific Humber has a number of neat features. The most striking is the enormous Rollfast cyclometer. Larger than a coffee mug in diameter, it displays moving speed and miles ridden. 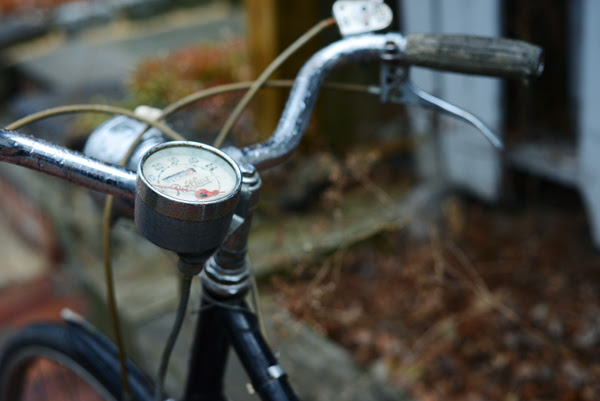 Mounted at the stem, a cable extends from the unit to the fork's dropouts 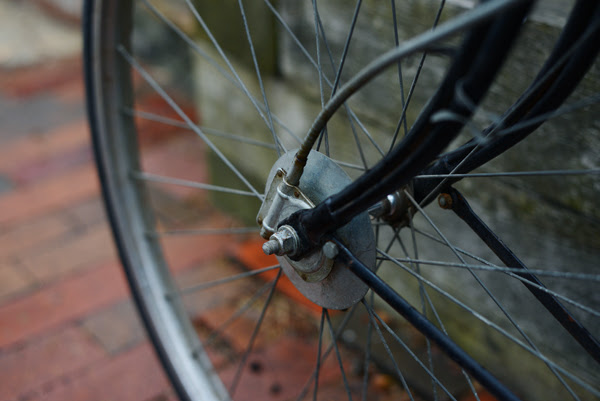 And plugs into a plate of sorts at the axel. As far as I can tell the cyclometer still works. There are 1,396 miles on this bicycle, according to the counter. 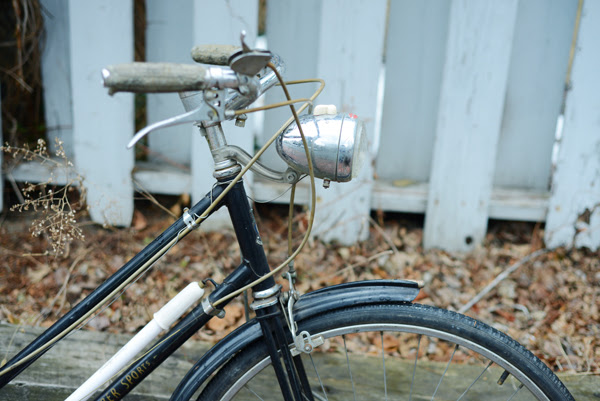 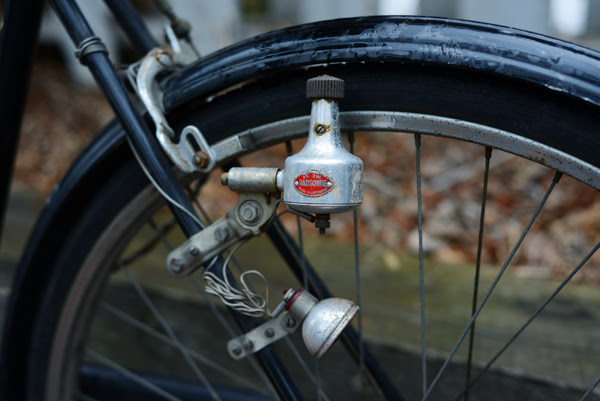 The bottle is at the back, clipped on to the left rear stay. 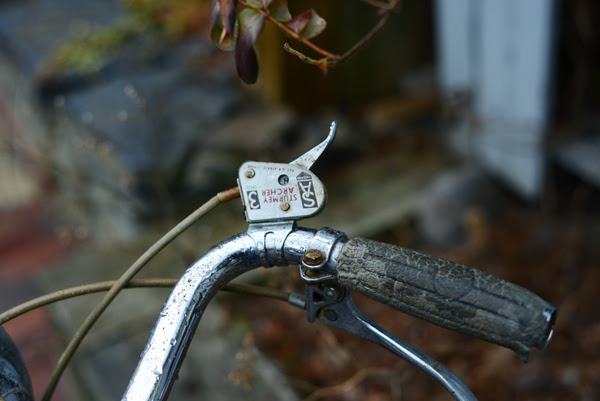 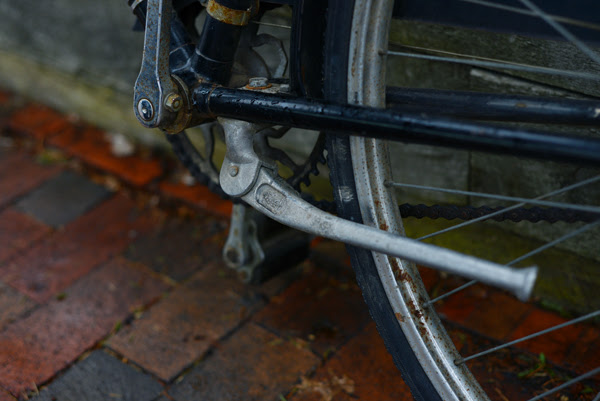 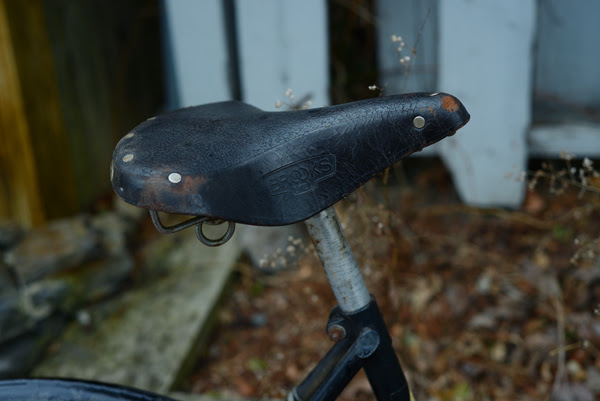 And a Brooks B72L (ladies?) saddle. Interestingly, this bicycle seems to have come with (stock) upgrades of an aluminum seatpost and rear hub to make it "sportier." However, the wheel rims are steel. 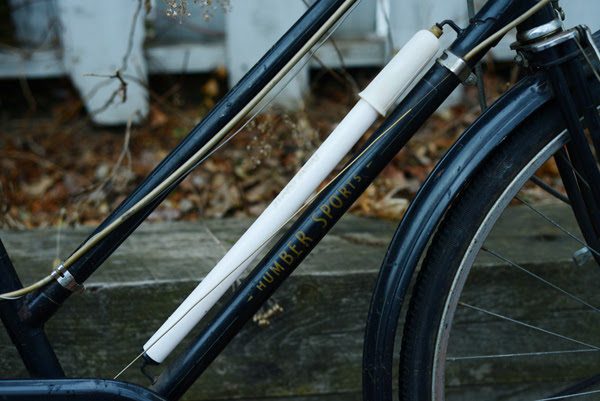 Being a Sports model, this step-through was designed around 26" wheels, with a shorter wheelbase, steeper angles, and a lower bottom bracket than the more stately Roadster models, as well as with a brazed, rather than bolted, seat cluster, and with caliper brakes in leu of rod brakes. Date of manufacture is 1956. 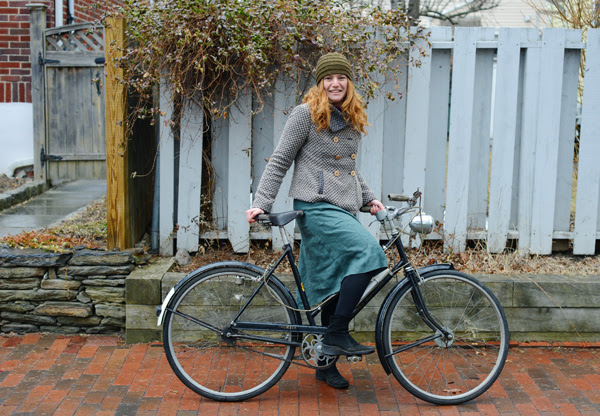 In person this Humber looks very compact - tiny even - but once I got on, it felt like a perfect fit. The cockpit was not cramped at all, there was no toe overlap, and the North Road handlebars were easily set level with the saddle, which is my preference for upright bikes. According to the speedometer I was doing 10-12mph straight out of the gate. Sporty!

But I know that, with bated breath, you are all waiting to hear about the Duplex Forks. Do they indeed deliver a superior ride quality experience worthy of the title "Aristocrat of All Bicycles?" 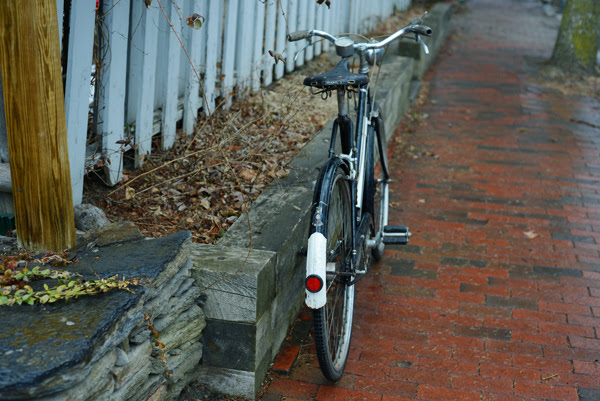 Well, I will say this much. This is one fine riding bicycle. Finer, for example (as in smoother, cushier, and at the same time more responsive) than a Raleigh Ladies Sports of the same era. It was so nice I did not want to stop riding it, wishing instead to whisper sweet nothings into its ear as we cycled off into the sunset, enormous cyclometer clicking away to the tune of our bliss... But whether it's the weirdo fork construction that's responsible for this or something else entirely, is difficult to tell. While the official line was that the Duplex Forks were a design feature to improve ride feel, in reality the manufacturers of the time often just wanted to find a way to visually differentiate their product. Hetchins had their vibrant stays. Bates had their diadrant forks. Baines had their flying gate frame. And so the duplex forks were Humber's distinguishing feature. Whether ultimately useful or decorative, they are a part of bicycle manufacturing history. And getting to look at, touch and ride one of these fairly rare machines was an exciting experience - for which I thank Nick at the Three Speed Hub heartily.
Labels: 3-speed Boston step-through test rides vintage