Triumph in a Winter Hour 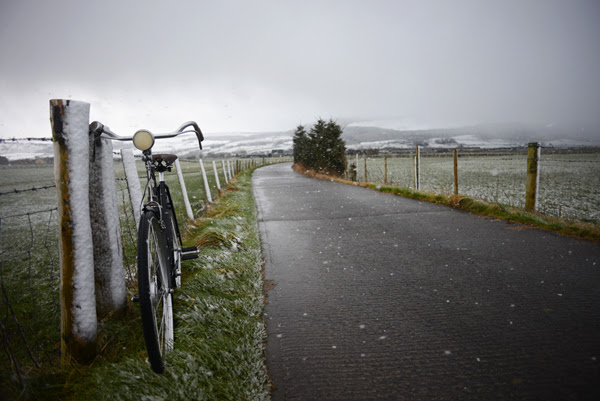 The sunny, clear morning that gave way to this strange day seems like a distant memory now. But at the time, it lulled me into a springtime mood. With the sky a rich blue that matched perfectly the crocuses in the garden, the day seemed ideal to put some air in the tires of my new 60-year-old Triumph and take it out for a maiden spin. The weather forecast was iffy, but then it almost always is. What could possibly happen in the course of a 2 mile ride up and down the winding farm lane?

Proper snowfall is so unusual here, that even when the first flakes began to float, landing on my coat and hat playfully, I did not think much of it and kept pedaling the eagerly creaking machine. These flurries would not last long. 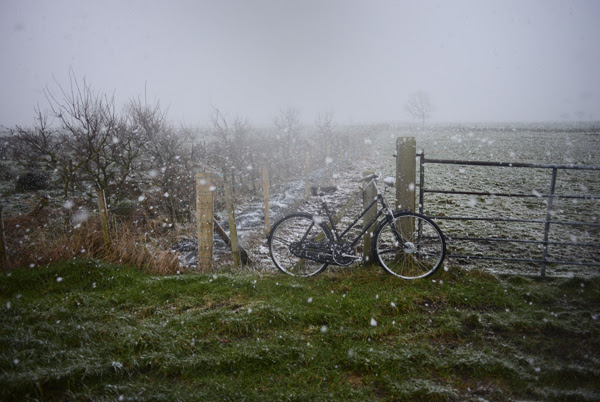 But it did not take long for the stray flakes to turn into a full blown snow storm. Tentative, sparse and watery at first, the snow grew drier, chunkier and denser by the second. Soon it fell like a veil, covering the grass, hedges and trees with a gauzy whiteness in the course of minutes. In the time it took me to put my camera away, the accumulation was dramatic. 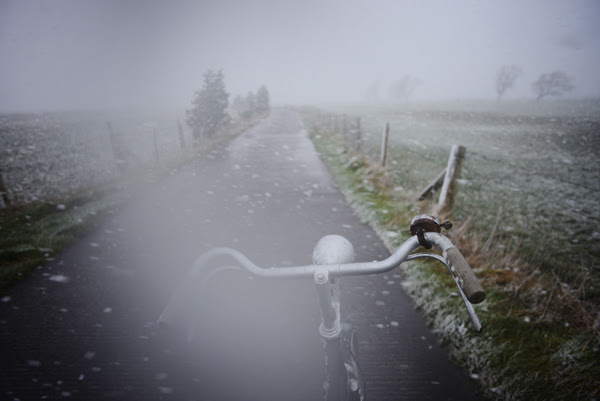 And by the time I came to terms with the seriousness of the situation and turned around to return home, visibility was almost nonexistent. Surrounding mountains disappeared into porridge-like fog. The vast fields, bleached white, blended with the horizon. One by one, trees and other markers of distance disappeared, until, for the final mile back, the furthest I could see in front of my tantalisingly non-functional headlight was a few feet.

The weathered cement lane, with its occasional outbursts of moss, became now a soft swooshy path, pristinely white. With my tire being the first to disturb it in this state, I felt a twinge of regret over ruining such unspoiled beauty. But this regret was short lived, as the bicycle took to the snowy surface as if they were meant for each other. The expression "like a ton of bricks" comes to mind. In a good way. Heavy and slow to react, the beast pushed onward persistently, its tattered tires gliding on fresh snow with an air of even-tempered striving. A complete unknown to me, this machine could have let me down, and I'd been fully prepared to walk it home. Instead, it almost seemed to savour the harsh weather conditions, enjoying the opportunity to show its mettle. "I am no novelty bike. Just look at what I can do!"

An hour later, the snowfall ended, the fog dissipated and the temperature rose. The snowdrops began to peek out again. The sun made a tentative re-appearance. Only the white caps of the mountains showed evidence of what had gone on. Soon, they too will melt, like the thin crust of snow now sliding off of the Triumph's spokes and chaincase, liquifying into puddles in the shed. A short, but intense winter burst that leaves me curious to ride this old bike in good weather.
Labels: Triumph vintage winter cycling