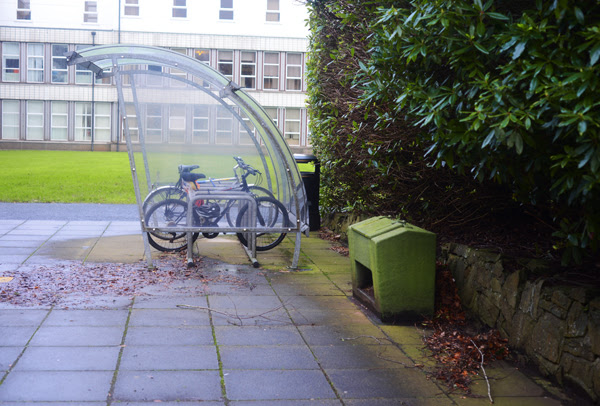 Passing through a University of Ulster campus the other day, I saw a couple of these neat bicycle parking structures. A transparent plexiglass shelter has been put up around an ordinary 6-slot bike rack. Likely in tribute to the campus's seaside location, the enclosure is abstractly sail-shaped. There is an intriguing quality to the way it catches and reflects light even in overcast conditions, and I was not the only passer-by inspired to snap a photo. Others ducked beneath to hide from a sudden burst of rain. One student even actually used it to lock up his bike. He then lingered inside while making a phone call before reluctantly moving on. 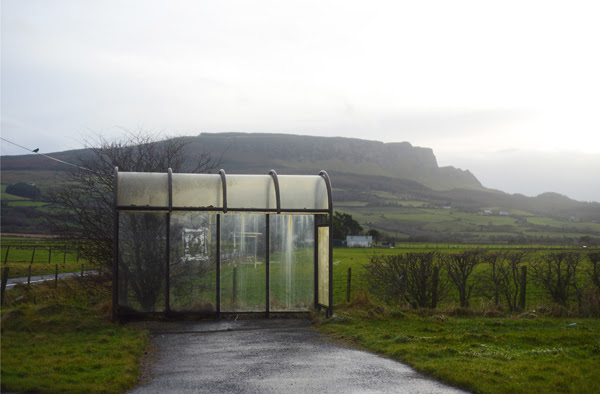 Despite its resemblance to contemporary sculpture, the university's enclosed bike rack is basically a modified bus shelter, of the kind commonly scattered through the local countryside - light-catching properties included. These too will sometimes function as makeshift refuges for pedestrians and cyclists - locals who aren't waiting for a bus, but want some cover from rain or wind. It seems this kind of structure makes for a useful multi-purpose design. 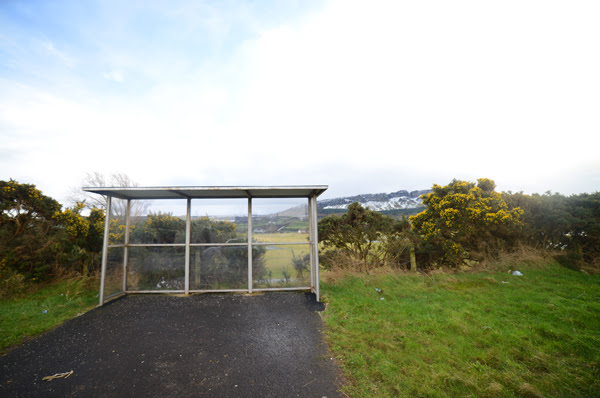 My picture of the sheltered campus bike rack received some positive feedback from cyclists, which makes me wonder to what extent a feature like this is valued. For those who must leave their bikes outdoors for 8-hour work days, sheltered racks would offer some protection from the elements. On the other hand, they would not really do much to deter theft compared to ordinary bike racks. Still, they could be an option worth considering for employers who cannot provide indoor bicycle parking - particularly in areas where weather damage is a bigger concern than theft. It might also be nice if the sheltered bus stops could be combined with bike racks of the same design, which could, in turn, encourage multi-modal commuting - particularly in winter. With storms hitting both sides of the pond pretty hard at the moment, rain and snow are playing starring roles in our lives, but we pedal on when possible and take shelter where we can!
Labels: bike parking locking up transport transportation options