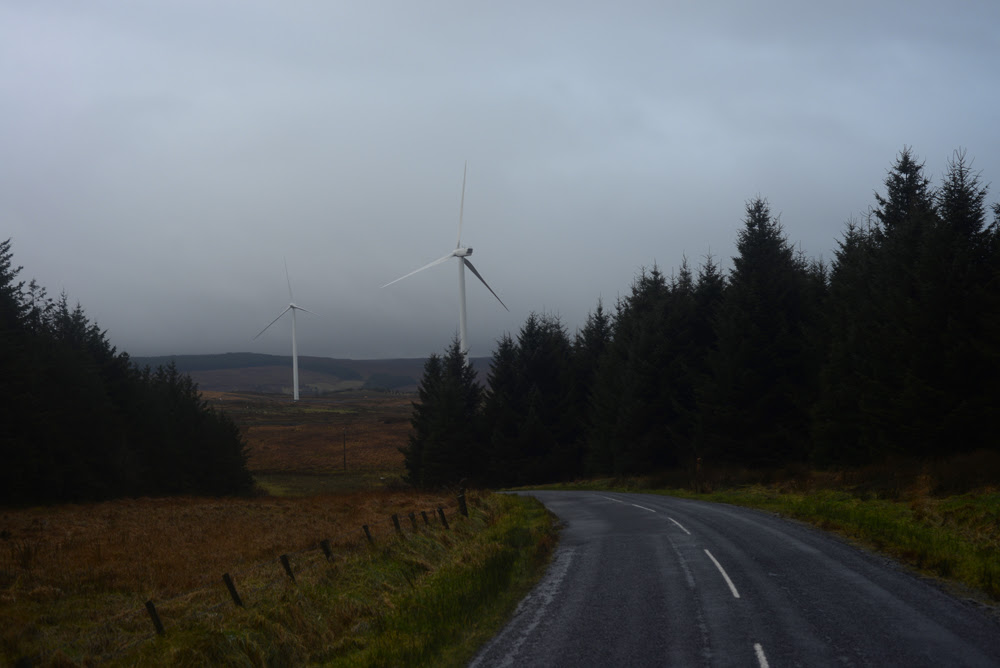 When I first began to venture into the Sperrin mountains, I was stunned by the sight of the wind farms. For over a decade now, I have seen them crop up in various places I've lived. Just not this many and not embedded in such dramatic landscapes. Political arguments about wind power aside, I was never one to find wind turbines an eyesore. In fact, I think they are elegant. The clusters of white slender stems and petal-like blades bring to mind some ethereal flora plucked from the depths of the forest and magically resized to tower above it. Seeing them in the distance on a descent, I would feel compelled to stop my bike and pull over to the side of the road just to stand there and stare in fascination. Whether bathed in sunlight or engulfed in milky fog, what a sight they were to behold.

Over time, I grew used to the turbines and no longer had to stop every time I spotted them in the distance, contenting myself with admiring glances in their direction without breaking my stride. Their white ghostly forms became a familiar part of the landscape, just like the windswept yellow-green grass and the mauve clusters of heather and the jagged pine treelines that defined the mountainside. Normal.

And then one day, close to home, some new wind mills went up. Right at the base of Binevenagh Mountain, on the aptly named Windyhill Road. Through a friend, I vaguely know the man whom the clump of land belongs to, and I knew the turbines were due to go up in that spot. I just didn't know when exactly, until suddenly there they were, directly in front of me. And they looked absolutely enormous. The angle at which I approached them - descending from a winding, perpendicular road - created a vantage point that, to the naked eye, exaggerated their size to monstrous proportions. Towering over the forest tree tops, the blades alone looked larger than the entire mountain. Their slow, steady spin, accompanied by a dull hum, seemed fitting to their size - like the deep, tone-deaf voice of a fairy-tale giant.

Leaning my bike as I went around the bend, my head swam at the sight of the giants looming over the sloping horizon. It was then I remembered that phrase from Don Quixote: "tilting at windmills,"  and nearly laughed out loud. The debate over wind power here is an impassioned one, especially now that there's been a proposal to put up a farm on the scenic ridge of Binevenagh mountain itself. In the meantime, here I am careening toward these controversial giants and experiencing the "tilting" in a most literal sense, although altogether different from the way in which Cervantes meant it. Just how much these humming, arm-swinging entities will come to dominate the landscape remains to be seen. Of the new ones on Windyhill Road I will say one thing: They make what is already a remarkable descent all the more dramatic - towering over the landscape fantastically, and at the same time, distinctly a part of it.
Labels: Binevenagh roadcycling stories