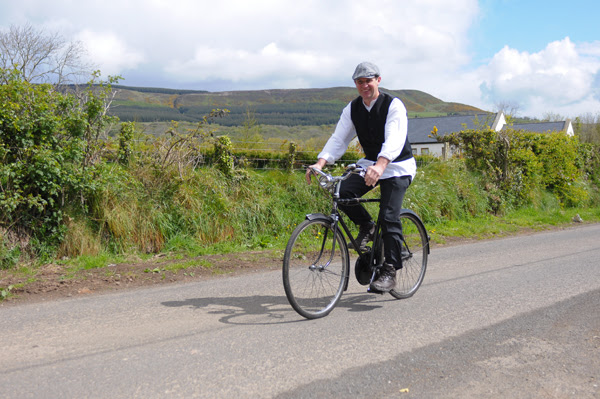 A little while ago I got the chance to ride a vintage roadster again. It's been a while, and let me tell you - that magical, floaty feeling was just as wonderful as I remembered.

The owner's great uncle rode the bike as a young man. After that, the machine languished in a shed for decades until the nephew discovered it and gave it a new life. "I gave it lower gears," he said, "to make it easier on the knees." And he pointed to his strong-looking, athletic 40-year-old knees. Having done the same to nearly every vintage bike I've owned, I nodded understandingly. Then I took him up on his offer to try the bike out on a longer loop.

About a mile down the flat main road, I turned, unthinkingly, left, onto a lane that winds around the side of the mountain at a steepening grade before coming back down. I've grown used to making this turn, as it's a loop I often do to get to several of my favourite photo locations. Despite the climbing involved, it is easy enough to manage on my own transportation bike with its low, low gears.

Now I'm riding the roadster up this lane. Almost immediately, I get into 1st gear. And almost immediately after that, the 1st gear is not nearly low enough. I pedal harder. I grind. Then I stand up on the pedals and push with all my might. After it feels as if I've been at this forever, I look back over my shoulder and see that I've made little progress. It is safe to say, the magical floaty feeling of the roadster is gone.

Miserable minutes, that feel like years, go by. I am in decent shape and not averse to hard work on the bike. In fact I've recently been introduced to the concept of "strength training," and will now often climb a hill in a harder gear than comfortable deliberately. But the difficulty of pushing this thing up the hill stuns me - in a way that is perversely motivating to keep pushing past the discomfort, to keep going just to confirm that it is humanly possibly to ride this bike up a hill without breaking my legs! After all, I say to myself… Back in the day people used to do this all the time. And they didn't even lower the gears! Imagining riding the bike up the same hill in its original gearing nearly makes me throw up, and as I finally arrive at the top of the slope, drenched in sweat and wild-eyed with effort, the question rings shrill and loud in my mind: How could they?!

Seriously. If we are to believe that ladies on loop frames carrying their shopping in front baskets, and men on roadsters going to and from work, were once a ubiquitous feature of the Irish rural landscape, then we must also believe they could tackle with ease the very hills that today make their grandchildren weep - or at least demand a 1:1 gear. Were the older generations inherently more fit than us? More stubborn? More willing to put up with physical difficulties?

In Boston, I remember trying one loop frame roadster where the 1st gear was so high I had trouble starting the bike on flat ground. I asked the owner, who happened to be a vintage bike collector, how ordinary women could ride these things 40 years ago. And his reply was, that in fact these bikes were not ridden much, and the high gearing must have been one of the reasons for that. And it's true that most of the vintage 3-speeds found in New England are in remarkably good condition, many of them blatantly unridden and suffering only from damage due to age and neglect.

By contrast, vintage roadsters found in Ireland and the UK tend to show signs of heavy use. In fact my theory as to why it is comparatively difficult to find vintage 3-speeds here is that most of them have been ridden into the ground by the original owners. Considering that the terrain here is hiller than what the Boston area has to offer, the argument that the high gears made the bikes as difficult to ride then and they seem now does not fit.

When I returned the borrowed roadster to its owner, by the colour of my face he could tell I had tried to ride it up a mountain lane. "You know," he said, "my great uncle used to live up a hill just like that and I've often wondered to myself how in the world he rode this bike every day!" He shook his head, and I did too, as if we both shuddered at the thought of it. Then he gave me a wave and pedaled the old roadster down the flat main road, as I got on my easy bike and rode in the opposite direction, feeling like an utter weakling with legs like boiled spaghetti.
Labels: rural cycling vintage