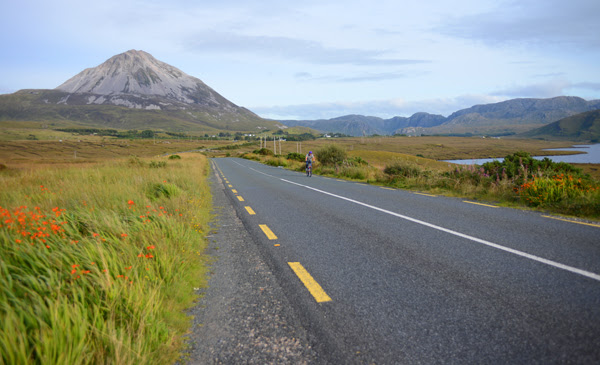 When I first heard the phrase, I knew what they meant by it exactly. Still, it surprised me that this existed as a phenomenon acknowledged by other cyclists. I mean, it seemed like the sort of concept that would thrive within my own imagination, only to be met with skeptism by others. But now here they were, throwing the words around on a group ride.

A "dead road." What an evocative term. And while it never occurred to me to describe the sensation with those exact words, now that I heard them I recognised what they referred to instantly.

A dead road is not just a road that involves a long climb at a grade that never quite lets you get into a good rhythm. And it is not just a road where the surface resists the tire's progress with a dull tacky stubbornness. It is more than merely a road unfortunate enough to be on the wrong side of the mountain, where the sun hardly shines and where there is always a mild, but annoying headwind in the direction of the ascent. While all of these factors may well be present, a dead road is more than the sum of its parts. It is like a twilight zone, upon entering which the cyclist grows aware of a disconcerting sensation where their bicycle - normally so fast and responsive - feels utterly lifeless. Where their tires feel as if they stick to the road and they just aren't getting out of the bike what they put in.

You might say that a dead road is the geographic equivalent of a bicycle that does not "plane." After all, if a bike can be responsive or non-responsive, why not a road?

Possibly the concept of a dead road is local to the UK and Ireland, as I've never heard cyclists use it in the US. But perhaps I just hadn't ridden with those over there who use it.

I was reminded of all this as I cycled along a dead road on this morning's ride, counting the minutes until it would be over. Turning the corner onto a road that was distinctly alive, I continued to climb yet felt distinctly untethered. It was a wonderful sensation. And it would have been impossible without the sensation that preceded it. So maybe the dead roads are nice after all, as they heighten our enjoyment of live ones.
Labels: Ireland roadcycling