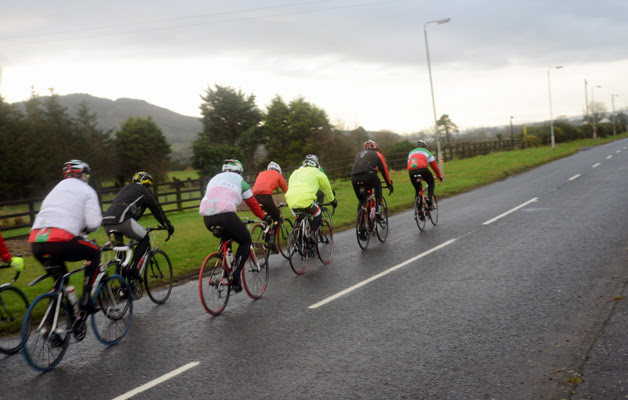 Last week I posted a photo showing a cycling club out for a Sunday morning spin in Northern Ireland. The photo soon received a comment noting the lack of fenders on what looked to be a sloppy winter day. Others have asked about this as well when I've put up similar pictures, expressing surprise that there does not seem to be a switch from summer to winter equipment among cyclists around these parts.

It's funny, because I think there is this idea in the US that roadies in the Green and Pleasant Land and the Emerald Isle possess not only a certain grit and toughness when it comes to riding in bad weather, not only an innate elegance of handling skill, but also an old-school wisdom with regard to equipment. A wisdom that, among other things, manifests itself in the ritualistic and compulsory donning of mudguards once winter sets in. So what's with all these fenderless roadies?

Well, here is one narrative, as related to me by numerous locals: The road cycling culture in Northern Ireland is in a state of flux, with a mushrooming in the numbers of new riders entering the scene over the past several years. Unlike previous generations, these new riders are not initiated into the sport by local mentors in a way that preserves the continuity of local history and traditions. Rather, they enter into it with attitudes that come from magazines, forums, blogs, and the like, which often comes to override long-held local practices. And because the newcomers' numbers are high, an interesting thing happens when they mix with the old guard: They end up influencing them more so than the other way around - until, one by one, even experienced cyclists are starting to drop the old-school trappings.

Nowhere is this trend more apparent than in the demise of what was once known as the winter road bike. In the old days (which I understand to be some time prior to 2005), one did not ride their good road bike year-round. Some time in the end of September, that bike would be put away and out would come the winter bike. Now, while there is no single definition of what that bike should be like, the general idea was two-fold: First, the winter bike should be both crappier and more robust than one's good road bike, due to the greater risk of damage by the elements as well as aggressive road saltings in winter. And second, it should be optimised for poor weather conditions. As far as frame material, this usually meant either heavy steel tubing or aluminum. And as far as components, this translated to either building the bike up as a fixed gear, or using an older, retired component group. Heavier, cheaper wheels with wider tires went on the bike in leu of summer's good wheels with skinny tires. And fenders (aka mudguards) were a must. In fact, up to a few years ago, I am told, a cyclist would be turned away from a club ride were they to show up without them.

Today I still see traditional winter road bikes ridden by friends with old-school habits, and occasionally I will spot an unknown one out and about. But they are more or less extinct from local club rides, as far as I can tell: Most local roadies will now ride the same bike year-round. And my feeling is, this is based on more than a willful ignorance of tradition or a carelessness toward nice equipment. One could argue that typical modern road racing bikes - high in carbon and aluminum content - are inherently more winter-friendly than their predecessors, eliminating the need for a dedicated winter bike. Speaking from limited personal experience, this is now my third winter riding a titanium bike with racing wheels, skinny tires, and lightweight aluminum and carbon components. In the beginning I kept my old roadbike - a 1970s steel frame with older components and wheels - as a bad weather substitute. But I eventually passed it on to another cyclist, as it became clear that in practice I preferred to ride my nice new bike in all weather conditions. Despite the all-season usage, I see very little wear on my road bike today, and none that I can specifically attribute to winter conditions.

But what of the issue of fenders? There are fenders on the market now that can be fitted even on the raciest of bikes with the tightest of clearances, and then removed and fitted again at will, with fairly little commitment. So why do riders shun them, even on group rides - despite mud in their faces and wet behinds? Well, I don't know the answer to that. But I suspect it's largely a matter of disliking unnecessary complexity (the definition of unnecessary being rider-specific, of course). And I suspect there is also a huge stylistic element to it. As fenders go in and out of fashion, this changes individual and group perceptions of how necessary they are. In the US, the fashion for fenders is now on an upswing, and I am sure it will come back around here as well. Me, I'll fit my road bike with fenders sometimes, but prefer not to - and mostly don't when I ride alone - for the simple reason that I am not sufficiently bothered by the consequences of being without them.

And so, befitting of my newcomer status, overall my winter road bike looks exactly the same as my summer road bike - save for an extra caking of crud, which, on occasion, I will wash off with a hose. The idea of a dedicated winter bike does have a romantic appeal to it - if for no other reason than as a ritualistic marking of the changing seasons. But in practice I don't feel the need for it. If my "good" bike is durable enough to ride year-round and if I enjoy it, then why not do exactly that …assuming, of course, that the roads are not covered in snow.

Do you have a dedicated winter road bike? How does it differ from the one you ride in warmer months?
Labels: roadcycling winter cycling