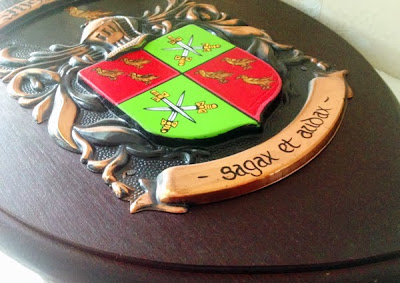 Over the weekend I finished moving into my new place. The house really is something - basically an old farm manor that has not been inhabited in years, in equal parts grand and derelict: dramatic staircase and French doors meet peeling wallpaper and broken floorboards. As befitting of such a residence, in the front hallway there hung a plaque with the family crest. It was too high for me to read the inscription, so I hadn't bothered to study it closely prior to moving in. But now my housemate took it down, and I heard him laughing down the hall. "Hey, look at this - Audax! Isn't that what you do on your bike?"

Wow. And yes, sort of. In cycling terms, audax is an alternative name for randonneuring - an organised form of long distance cycling. The international governing body for these events is known as the Audax Club Parisien. In Ireland and the UK, the term audax is used, whereas the term randonneuring is preferred in North America.

While I knew the word audax did not originate with cycling, I never thought to look up what it meant. Seeing it now on the crest prompted me to. Rather unsurprisingly in retrospect, it means "audacious" in Latin - brave, bold, courageous, adventurous. And looking into it further, I learned that the motto "sagax et audax" is a not uncommon one to be found on family crests, meaning something to the effect of "sharp and bold," or "astute and audacious." This would surely make an appropriate motto for a cycling family (are the Blayleys in need of a crest?). However, the owners of my house are dairy farmers.

Having started randonneuring last Spring with the New England Randonneurs, I would love to try some audax events here. Unfortunately Northern Ireland is in a weird situation jurisdictionally when it comes to cycling, and I do not believe any audax events are held here (though I'd be glad to stand corrected - anyone?).

But despite the lack of a local randonneuring culture, finding the word "audax" in my new home feels serendipitous. Could an Audax Club Nord-Irlandais be in the cards? An audacious undertaking for sure, but the routes and scenery here would be perfect for it.
Labels: Ireland randonneuring