Last Ride Out of Castlerock 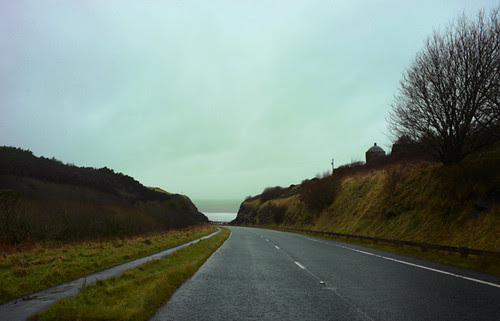 Moves can take place in stages, and as I moved from the village of Castlerock to the village of Bellarena some miles to the west down the coastal road, there was a period defined by a constant stream of going back and forth - of moving things into the new house bit by bit while working to make it livable. Sometime in the midst of this, I made the mental switch and began to think of the new place as home. It happened not the first time I spent the night there, but on the day I brought over my roadbike - by means of riding it from the old house to the new.

Setting off from the small seaside cottage where I had stayed - with its beige pebbled walls, its slate shingle roof and its cramped front yard - I felt a keen awareness that this would be my last ride out of this place. This stunningly beautiful, windswept place I could not wait to leave behind. Clipping in, I took one last look at it all as I pushed off into the wind that never seemed to subside.

The tiny house was an old one - built as a residence and not as a holiday cottage, unlike most of the others nearby. And unlike the others, it was built at a slight angle to the road, with complete disregard for the sea that spread out across it. Of all the windows, only a single one in the livingroom faced the water. And mystifyingly, the layout of the room was such as to discourage its occupants from facing that window - the fireplace on the wall opposite serving as the focal point. Stranger still, even should they turn around to look through the sea-facing window, their view would be mostly obscured by the fence enclosing the yard out front.

On countless occasions I've wondered why the house was built this way - almost willfully snubbing the dramatic seascape that ought to be a home-owner's dream. Could it be for the same reason the scenery made me uneasy? Could it be for the same reason the relation I'd been house-sitting for had picked up and left abruptly after less than a year there? Some believe that places can have a "bad vibe," and that is an apt description for what I've felt here. I felt it not from the house, but from the area. The house's layout almost seems like evidence that the architect had felt it too, and tried to protect the inhabitants from it.

For some, to say that you live in Castlerock has a certain caché to it. It is a "posh" place - the village center dense with old Georgian houses, the train station almost toy-like with its wrought iron latticework. The local coffee shop - its atmosphere chic and worldly - is said to be among the best in Northern Ireland. The butcher shop next door delights passers-by with its old fashioned window display. There is one pharmacy. There is one small grocery store. There are two pubs - one with a weekend disco. There is a fish and chip shop with a mural of a grinning fish serving customers. There is a pedestrian culture, with tweed-clad residents strolling up and down the hilly lanes as ocean waves crash picturesquely in background. Crowds of young surfers flock to the beach in vans covered with sponsor logos.

In comparison Bellarena is perceived as isolated and rural-rough, my delight over moving there often met with some bewilderment. But there are those who understand - those who shake their heads and even let out a slight shudder at the name Castlerock. "I could not live there either," they say simply, and we leave it at that.

To describe the daunting feeling of cycling "out of" Castlerock toward the main crossroads is to concede there is a strong psychological side to going out on the bike. There is a heavy, dead sensation to that barren 1 mile stretch that separates the village from the main coastal road and the network of mountain roads beyond it. This sensation can only partly be explained by the fact that this stretch is entirely uphill and nearly always supplemented with headwinds. But this alone cannot fully explain the overwhelming tediousness of it, the emotionally draining effect this mild ascent has on me by the time I reach the crossroads. As I stall my bike waiting to turn right onto Seacoast Road, Castlerock feels like a led blanket I am desperately trying to claw my way out from underneath of. The knowledge that this awaited me at the start of every ride, dampened my enthusiasm for roadcycling more than I would have thought possible.

Some time after I moved to Castlerock, a policewoman friend told me the story of the murder at the 12 Apostles - a row of refurbished stone cottages scenically situated at the edge of the woods. Some years ago, a man who lived there and his mistress - each married and with many children apiece - made a pact to kill their spouses. They went through with the plan and got away with it, until, two decades after the fact, the man walked into the local police station and confessed to it all, unable to live with the guilt. This was all over the local papers at the time, the Castlerock population shaken. To think, that for all those years the pair was living here, harboring their secret. As I make my way past the cottages, I cannot help but remember this.

The village of Bellarena is not really a village as such, but more like a scattered rural settlement on the Magilligan Peninsula - on the other side of Binevenagh Mountain from Castlerock. The best way to get there is via the Seacoast Road that runs along the mountain side. The first part of this route is ludicrously scenic - a seemingly endless sweeping descent with postcard views of the sea framed by tall cliffs and the famous silhouette of Mussenden Temple. No matter how many times I cycle along this stretch of road, I have never been able to warm to this descent and this view. It feels unreal, in the cold detached sense of the word. It feels as if it's designed for paintings and postcards rather than real-life enjoyment. The view cannot be connected with, it can only be observed from a distance - as if it's meant to feel unattainable.

As I plummet past the picture-perfect sight, I feel a rush of relief at the next, comparatively monotonous stretch of the road. I cycling along the steepest part of Binevenagh Mountain now - a vast cliff streaked with occasional slender waterfalls. To my left, this horizontal wall of rock creates perpetual shade, while on my right the sea is becoming obscured by fields and clumps of woods. I should feel claustrophobic here, but instead I feel pleasantly sheltered. And I feel as if I've crossed some invisible border that separates the stark, gloomy aura of Castlerock from the cozy, bright one of Bellarena, which I continue to cycle toward.

As the road curves along the Magilligan Peninsula, the mountain on my left grows less steep and more colourful with the remnants of Autumn foliage and heathery clumps. On my right, miles and miles of farmland spread toward the sea - which is about to narrow dramatically and become the Lough Foyle as I pass the peninsula's tip. I can see this happening in the distance, along with the hills of Donegal looming beyond. This last stretch is completely flat now, and I pedal at the highest cadence I can manage along the main road, vigilant so as not to miss the hidden narrow lane that will take me across fields toward the house where I'll now live. This was my last ride out of Castlerock and I breath a sigh of relief - overcome by a sense of escape. Escape from the stunning, cold, haunted beauty of a place that is not for me.
Labels: countryside Ireland ride reports roadcycling