Is This About a Bicycle? 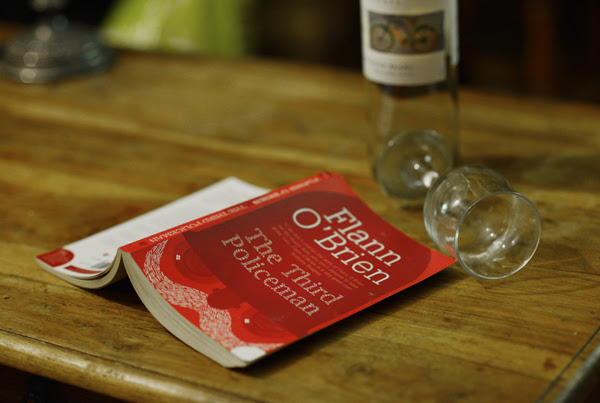 "Will you follow after me till I have a conversation with you privately?"

On this disconcertingly sunny day before New Year's Eve I am siting in a coffee shop in a small town in Northern Ireland. Past my table a smallish policeman wanders casually. He is dressed head to toe in protective gear, including a heavy bullet proof vest and an enormous face shield. No one but me pays him any attention. Heading for the rear of the shop, the policeman carries an object that resembles a briefcase made of oversized Legos, plastered with bright decals whose warnings my eyes can't discern in the dim interior. Some minutes later he re-emerges from the rear and - toylike briefcase firmly in hand - makes his way back across the room toward the exit, slowing his steps, it would seem, as he once again is about to walk past my table. For a moment I am certain - completely certain - that he intends to stop and say this very phrase to me. But he only throws a tired, face-shielded smile my way and walks out, and I remain there - mouth ajar, hand with coffee cup frozen in mid-air, and a copy of Flann O'Brien's The Third Policeman splayed open across my lap.

For some time I resisted reading this book, despite repeated suggestions that I really ought to. I shunned it on the basis of an erroneous belief that it was a slapstick comedy detective story type of novel, to do with Ireland and a bunch of cycling policemen; I had so many other books to read that I could not be bothered with such a thing just then. Or so I said to myself. But in retrospect it is clear to me that my resistance to The Third Policeman was due to something else entirely - an intuitive knowing, if you will, that the book and all the information within it could prove hazardous for the delicate state of my mind. Because that it was, and is. While I am normally a quick reader, getting through The Third Policeman took me ages; it was too overwhelming to take in quickly. And at the end, I found myself conflicted between not being able to take much more of it, and not wanting it to end.

If you can imagine Master and Margarita crossed with The Naked Lunch, crossed with A Bit of Fry and Laurie, crossed with Waiting for Godot, crossed with almost anything by Thomas Pynchon… well, The Third Policeman is really nothing like that at all. But reading these volumes, and then conjuring up such a hybrid, might prepare you for it a little. Maybe.

What is this book like, without giving too much away? I don't want to describe the plot or any of the details. Which is just as well, because what got to me was not any of that, but that the book tapped into - a little too realistically - my own experience of present-day rural Ireland. Before you think this an attempt to be funny, let me explain that I refer not to the absurdity of the plot or specific encounters, but to Flann O'Brien's detailed portrayals of sensations, dialogue, scenery and mannerisms. To be sure, he exaggerates and distorts grotesquely, and he re-shapes language. But in so doing he captures the essence of being here more poignantly than any other local author I have read. On top of this - or maybe because of it - his manner of communicating ideas (the kind of insane ideas I try to suppress in myself) is so delicate and subtle, it is easy to underestimate how deeply they penetrate the psyche until it's too late. Honestly, I will need to ride my bike for hours, possibly days on end, just to recover from the effect of this book.

And speaking of. I should move on to the important question for the readers of this blog: "Is this about a bicycle?" Well, since that might be the most quoted line in the book, the answer is a sort of yes. Except that it is really about language, metaphysics, the absurdity of organised society, and the pathology of everyday life. So on second thought… Sure, it is about a bicycle. After all, everything is.