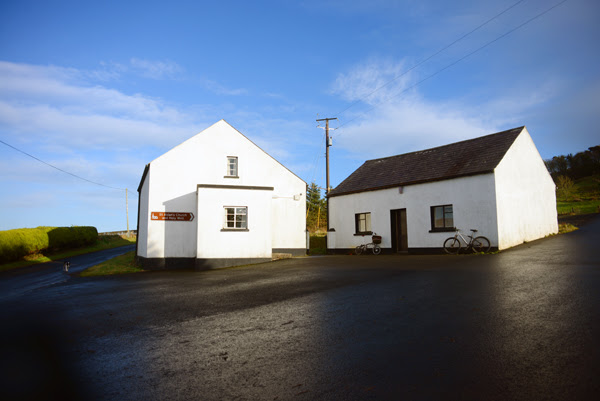 In these last days of the year, there's been, as usual, a great deal of talk about New Year's resolutions. And after hearing some friends say their resolution was to cycle more in 2014, I finally suggested - why not now? Because I can't help but feel that the very point of a resolution is to delay this activity you are supposedly resolved to do, to find an excuse for not doing it already. As a result, this thing you put off until January becomes infused with dread and seems all the less appealing. And how sad it is that cycling should be put into such a category!

And so on this fine December 31st, upon my gentle prodding, we set off on a short photo expedition up the side of the mountain. It was a windy, but sunny and cheerful day. The ride turned out hillier than planned, but we did not complain, as fabulous vistas spread out under a perfectly clear sky as far as the eye could see. We even encountered an old acquaintance, who was happy to join us for a spell. It was one of those unexpectedly, spontaneously perfect days made all the better by being out on bikes.

Now I have done New Year's Day rides before, but never an Old Year's Day Ride. And I have to say I highly recommend it. As we cycled on this last day of 2013, we felt - on a delightfully visceral level - that we were pedaling away from 2013 and toward the blank slate of 2014.

So my message to you dear readers is… If you have time for a ride in these last hours of 2013, why not say "good bye to all that" on two wheels? Happy New Year to all and thank you for reading! I will see you again in 2014.
Labels: holidays