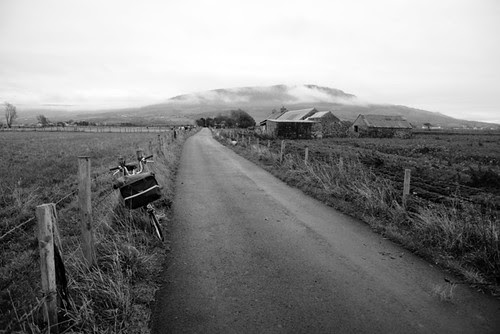 The transportation choices we make tend to be context specific. This goes for the "big" choices such as bike versus car versus train versus bus versus spaceship versus horse and carriage. It also goes for specifics such as what kind of car or what kind of bike we choose, as well as the ways in which we use them.

It should come as no surprise that my own preferences and viewpoints have been largely shaped by cycling in and around Boston for the past four and a half years. At the beginning there were stretches of Vienna mixed in as well, and later Ireland. I've cycled in NYC a bit, as well as in various smaller East Coast towns. I've cycled some through the New England countryside. But mostly my experience as both cyclist and bicycle lover (and these are separate things) is undeniably Boston-specific. And as far as Lovely Bicycle - Had I been living elsewhere I doubt that I would have started the blog, or developed it in the way I have.

As I explained a few posts ago, I am now living in Northern Ireland - in a rural area on the North Coast. I have no idea how long I am here for, but for the time being this is home. And of course being here has changed - and will continue to change - the context and content of my writing here.

At various points over the years, I've mentioned that I see myself eventually living in the countryside, and wondered how feasible cycling for transportation would be in a rural environment. Well, it looks like I am in the process of finding out. And the one thing I'm sure of so far, is that context matters here a great deal as well. Not all rural areas are alike. Specifics of topography, road layout, proximity to various amenities, weather-related nuances, even cultural factors, can make all the difference in how feasible commuting by bike is.

When I first visited Northern Ireland last year, I stayed in a tiny coastal town in County Antrim called Ballycastle. It was a beautiful area to visit, but as a cyclist I would not want to live there. Ballycastle itself has all the basic amenities one would need, but it is best navigated on foot, not by bike. And once you get out of town, the nearest signs of life in any direction are both far and uphill, as Ballycastle is situated in a valley. This makes going anywhere by bike a major project. When I stayed there I was highly motivated by sightseeing and photography, so I did cycle a lot. But for everyday living, I would find cycling for transportation there daunting.

By contrast, the Roe Valley area in Country Derry, where I stayed earlier this summer, is cycling paradise. Not only are there fantastic roadcycling routes in all directions, but getting around for transportation - either to neighbouring rural destinations or to the nearest town Limavady - is very manageable on a bike. Limavady is only 30 miles west of Ballycastle and in photos the scenery appears similar - all glens, sheep, mountains and sea views. But the layouts and the general "vibes" of these areas are very different - and this isn't something you can know unless you've stayed in both places.

Even areas situated close together can feel like different worlds to a cyclist. Bouncing around between informal living arrangements with friends, most recently I had moved from the village of Aghanloo (pronounced "Anna-Lou") in the Roe Valley to the village of Castlerock just beyond it. I thought I knew what to expect from life in Castlerock, as it was only 6 miles away. But the specifics of the way this place is situated make it feel somehow extra-bleak and uncozy, to the point that it really bothers me. So despite Castlerock's stunning scenery and the availability of a fantastic cycling highway that serves as a direct route to a major town, I would not choose to settle down here - preferring the area where I stayed earlier.

As I'm about to finally move to a place of my own, in a location just right for me, I feel that I have a good grasp of what I need from a rural environment to combine my love of the countryside with my love of cycling for transportation. After some consideration, I will not be getting a car. And while I can't make any sweeping statements about the direction of this blog, I suspect my feelings on the loveliness of bicycles and the romance of cycling will endure.
Labels: blog development countryside Ireland rural cycling transportation options