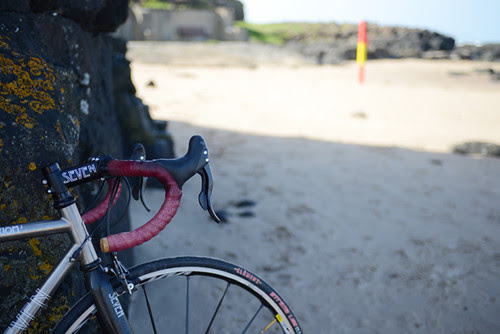 You know the drill in this scenario:

You're stranded on a desert island and you can only have one bike! What bike will it be? Hmmm?

I've been thinking about that one lately, as I now get to play this game for real - sort of. Okay, so moving to Northern Ireland is not exactly the same thing. But hey, Ireland is an island. And the area I'll be living in is kind of remote. I say it's close enough.

So what are some desert island bike criteria? Well, the bike must be reliable, durable, adaptable. Whatever distance and terrain you need to cover, it should be capable of covering. Whatever elements  you'll be exposed to, it should be able to withstand. Whatever supplies you will need to haul - be it driftwood, those eels you caught for dinner, or your lunar-powered laptop - it should have provisions to haul.

But a desert island bike should also be fun - because, let's face it, you're on a desert island and stuck with only one bike forever (or until you're rescued, or until you smuggle a second bike on your next trip over - whichever!).

A desert island bike is the bike that can serve as your entertainment, your mode of transportation, your means of exercise and your anthropomorphic companion, all rolled into one.

But you must also take care not to overdo it. In theory, a Ti-carbon monstercross bakfiets might seem like just the thing. But in practice it could prove daunting for everyday use as an only bike, what with the constant polishing of the cargo box and the hydraulic disc brake bleeding. Sometimes simpler is better.

The desert island bike can be a fantasy bike that exists solely in your imagination. It can be a real bike that you've always thought would be perfect for such a scenario. Or, it can be a bike you already own - the one you've realised you would not be able to cope without.

For me that bike would probably be the Brompton. Sure it is not a fast sexy roadbike, but it can tackle hilly roads. It is not designed for dirt, but can act like an all-terrain vehicle if called upon. It is not a cargo bike, but can handle a heavy crate of eels with aplomb. Its dynamo lighting will illuminate my thatched cottage (circa 1620 and unrestored, so no electricity - score!). And it's tiny enough to be folded into a lifeboat. Just as importantly, I know that should I find myself without this bike even briefly, as I recently have, I start climbing the walls (and when you're living in a stone thatched cottage, that's not hyperbole; you can totally climb the walls as the stones make for sturdy footholds).

Anyway. So here I am, packing the Brompton while other bikes stay behind, their fates unknown. But I cheated at the Desert Island game: My Seven roadbike is waiting for me in Ireland, left there during my previous trip. So in fact I will have two bikes. Sport and transport, for the love of god don't make me choose! But the desert island bike is fun to contemplate anyway. What would yours be?
Labels: Brompton Seven silliness transportation options