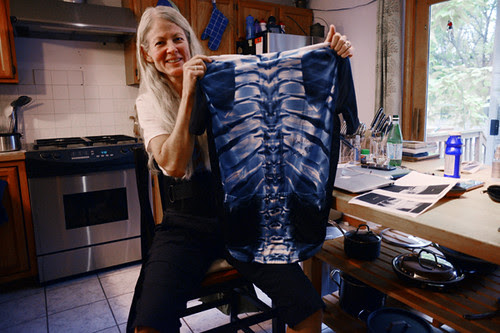 When I walked through Pamela's front door, they were moving furniture. Or rather, her husband John was moving furniture. Pamela herself stood nearby in a posture of uncharacteristic stillness. She then made her way toward me, slowly stepping out of the shadow into the living room light. I took one look at her and exclaimed "Hey, that looks fabulous on you! Sexy, like a corset." I was referring to her massive back brace.

People say the darnest things when they don't know what to say. It's the nerves talking. Or the shock. Or the feelings of guilt. But none of this applied to me. I genuinely thought her back brace looked cool and I felt comfortable blurting that out. See, that's one thing I love about Pamela. I can say whatever the heck I want to her without worrying about being insensitive. Because she has a warped sense of humor. Because she understands that to treat a disaster nonchalantly means you're well on the way to overcoming it. Because she'd say something similar herself. Because a comment like that was sure to cheer her up.

Except this time it didn't. She wasn't offended, but she wasn't cheered either. She looked sad, pessimistic, deflated. When we spoke, she told me she could not imagine riding a bike again. "Damn it," I thought. Broken back or not, this isn't Pamela. This is bullshit." And I reacted the way that felt right, which was to treat Pamela as if nothing had happened. As if a truck hadn't hit her from behind a month prior, fracturing her spine and putting her future mobility into question.

For a surprising number of people the year 2013 has been a year of crisis in one form or another, and I am among them. This summer the course of my life was irreversibly altered. And while I am evasive about it here (for now at least - bear with me), I wasn't evasive with Pamela. When I wrote her about it from Ireland, she responded in her usual practical, helpful manner. The following day she was hit by a truck, sending her next email from the hospital. And so our very different crises became linked in time.

Visiting Pamela back in Boston, I realised the connection was not just a temporal one. We had something in common: We were not ourselves. What I mean is, we were each behaving out of character in the way we were reacting to our respective situations. And, each noticing this in the other, we felt alarmed. We wanted to shout "Snap out of it, this isn't you!" And we did shout it.

In one of her blog posts about her injury, Pamela writes:

"I may not be physically paralyzed, but I am becoming so paralyzed by fear that I may not be able to get back on my bike when the physical impediments to do so are gone.

...I define myself as cyclist first and foremost, and if I can't reclaim that state of being, this distracted driver who ran me down on September 8 will have robbed me of my identity."

This is chilling for me to read. Particularly because, as I see it, it's not just Pamela's cycling identity that is threatened, but one of her defining character traits: her fearlessness. There are situations that bring about a crisis of self, which can prove more serious than the immediate disaster we are faced with.

Undergoing my own crisis of self, I started to question everything. This included my identity as a cyclist. Over the past weeks, I had wanted to focus on personal matters and "take a break from the bike world." To a laughable degree, these two goals proved incompatible. I may have taken a break from posting on the blog, but my friendships, interactions, daily activities, even my thoughts, remained intertwined with the reality I've come to know through Lovely Bicycle. My world as a whole may have turned upside down, but cycling - and the impulse to write about it - has retained firm footing. There is some comfort in that. Some confusion too, but mostly comfort.

The last time I visited Pamela, she mentioned the idea of "longing." She still could not imagine cycling, she said. But she could now "imagine imagining" it. She could imagine a time when she would feel a longing to get on the bike again. And once that happens, it will only be a matter of whether - and when - the longing outweighs the fear.

Hearing this lifted my spirits and infused me with a sense of optimism more than anything else that's been said to me in the past month. I thought back to my first rides with Pamela two years ago. She took me up and down winding hilly roads the likes of which I'd never ridden before. With her signature nonchalance, she introduced me to roadcycling as I know it today, ignoring my anxieties and ineptitudes. So much of it felt impossible at the time, but I got through it - the push and pull of my own fear and longing so tangible I could feel it in the back of my throat. Remembering this, I rode home with the wind on my face and felt tears streaming down my cheeks. They were windy cycling tears, mixed with happy tears - for Pamela, and maybe also for myself.
Labels: bike friends Pamela stories