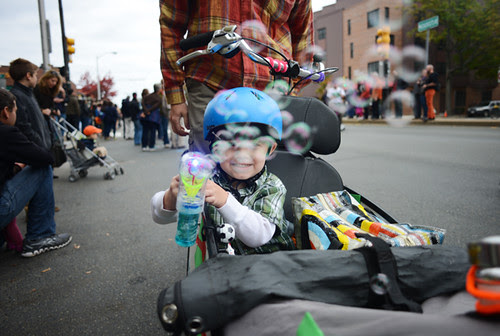 When a friend told me he was “too stressed to ride lately,” that struck me as dissonant at first. We think of cycling as a stress-reducing activity. So if you’re feeling stressed that is all the more reason to go on a bike ride. But the more I considered it, the more I came to realise that the relationship between cycling and stress is not linear for me either.

When I'm stressed out, cycling does help. It clears my head, slows down my racing thoughts, improves my mood. It regulates my appetite and sleep patterns. And when sufficiently strenuous, it plain exhausts me into a state of near-catatonic relaxation. I have never been on a bike ride where I started out feeling stressed and didn't feel better afterward. And knowing this, my use of cycling for stress relief has become habitual. Feeling frazzled? Under pressure? Bad mood? Off I go on a bike ride. There, that fixed it.

There is, however, a threshold beyond which this doesn't work. Because stress, when it's bad enough, can demobilise. And this creates a Catch 22 situation: You're too stressed out to engage in an activity that can relief that stress. At that point, it can become a vicious cycle, with the stress building up and making you all the less likely to get on the bike.

So what do you do if that happens? One solution could be to try and catch it early - convincing yourself to ride anyway before things snowball. Of course that's easier said than done. And personally, I don't like to force myself to get on the bike when I don't feel like it. So if I'm feeling too stressed to ride, then I just don't, and if that results in a cycling-lite phase of some weeks so be it. As always, I know I'll come out of it, waking up one morning and feeling the need for the bike before my eyes are even fully open.

There may be times when we are too stressed to ride. And there are times the bike can wash the stress away better than any other remedy. Hopefully the latter overshadows the former.
Labels: comfort roadcycling