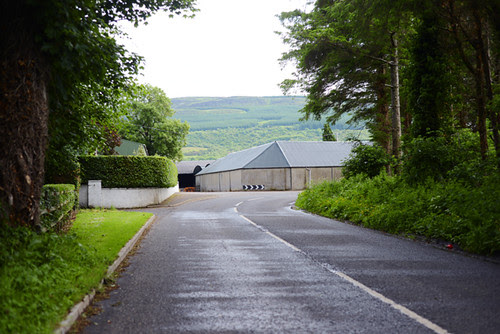 For much of my adult life, I have moved between countries with right-handed and left-hand traffic flow. However, until recently I had only driven and cycled in the former. Only when I stayed in Ireland last spring did I finally experience cycling on the left side of the road. Since then, I have gone back and forth several times, and have noticed something odd in the process: I seem to do better cycling in left-handed traffic - in particular, when it comes to cornering.

I first noticed it earlier this summer. Cycling on the winding back roads in Northern Ireland's Roe Valley, I was somehow able to make tighter turns and to corner faster than back in New England. When I shared this observation with a riding buddy, he said "Well, sure - you're getting more practice now." But I could not attribute this improvement entirely to practice, because I noticed it immediately upon arrival. And when I went back to Boston later, I noticed a difference in the opposite direction: I was not quite as good at cornering as I had been at the end of my stay in Ireland. How could my ability suddenly diminish like that?

Only after some time did it hit me that the side of the road I was on played a role. In the US, right turns are tighter, since you are cycling on the inside of the turn, and left turns are wider, since you are cycling on the outside. In Ireland it is the opposite. And apparently I find it easier to do a tight left turn than a tight right turn.  It is not a huge difference, but it is there: I can do a sharp left much more intuitively - and therefore faster, smoother, calmer - than a sharp right.

Noticing this has made me wonder whether others have had similar experiences in directional preference when cornering. Is it related to the cyclist's handedness, I wonder? Me, I started out naturally left-handed, but was re-trained to be right-handed at a young age... which resulted in an ambidextrous hodge-podge where I am right-handed in some tasks, left-handed in others, and indifferent in others still. What role this plays in cycling, I am not entirely sure. But when it comes to cornering, it seems left-handed traffic flow is my friend.
Labels: Ireland roadcycling technique