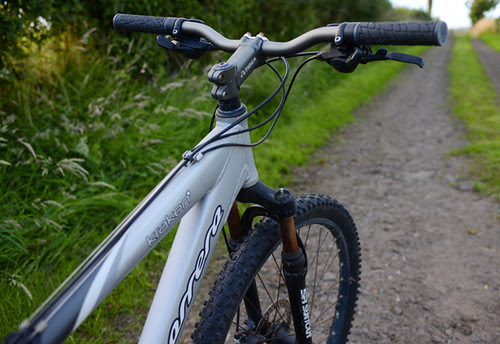 Of all the lakes in the vicinity, I had to fall in love with the one on top of a mountain, accessible only via a steep rough gravel road. I have been up there in a car with friends a few times now. But what I really want is to be able to go on my own - ideally without motorised help. My tentative plan was to ride up the paved part of the mountain on my roadbike, then hike the remaining 2 miles up the gravel lake road - either leaving my bike hidden in the woods below or dragging it along.

"Or..." said my friend Keith, "I can lend you my mountain bike, and you can ride all the way up through the woods."

Quickly I began to mutter something about it being too much trouble, but Keith saw right through that and laughed. "No it's not, we ride the same size bike. Lower the saddle and off you go."

Damn. Quick, say something to make this sound like a bad idea, I thought. But I could come up with nothing, other than the truth - that I feared the mountain bike. That I would rather sit through a root canal than have to ride one 6 miles up a winding forest path with 1,500 feet of climbing, and then - gulp! - back down. 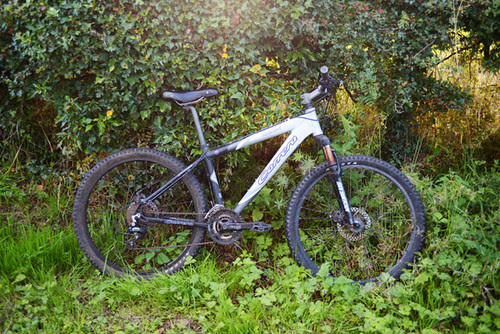 But I said none of these things. And two days later I found this propped against the side of the house when I came home.

So... Oh my God, I don't know where to start. Beefy aluminum frame, suspension fork, 2" knobby tires, narrow straight handlebars, disc brakes, and a drivetrain with a triple crankset and thumb shifters. The bike is a Carrera Kraken - an inhouse brand of the UK department store Halfords. However, this is not a "department store bike," as the concept is known in the US. According to locals in the know, Halfords actually sells very decent quality budget road and mountain bikes. Keith's bike is a good few years old and everything is a little rusty - though it all works fine. 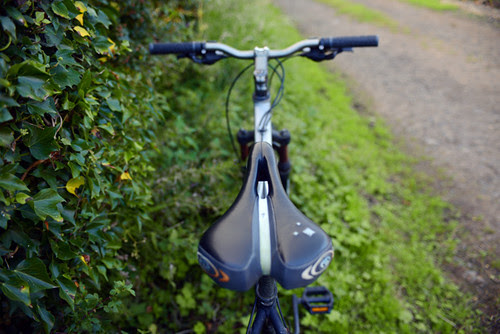 The bike is a Small (16" frame with a 56mm virtual top tube) and the fit feels pretty good to me. I wouldn't mind it if the handlebars were a tad lower, but what do I know about mountain bike sizing (how upright are you supposed to be?).

What took the most getting used to was the super-high bottom bracket. I kept playing around with the saddle height and it took me a while to set it properly; I couldn't believe how high I had to make it in order to get good leg extension. Being on the bike felt a little strange at first as well - so high off the ground! The disc brakes are insanely grippy, especially the front, but modulating them became intuitive with some practice. Slowly, the fear began to turn to curiosity.

I spent an easy afternoon with the bike, just trying to get to know it and get comfortable with the idea of riding it. There is a back road with some steep pitches just outside my door, as well as woodsy stretches of dirt, gravel and grass I could try. Skeptical that on a bike this beastly-looking I could handle the long steep climb up to the lake, one thing I wanted to do was see how it went uphill. As it turned out, not bad - even on pavement, with those knobby tires. The gearing is low enough to climb a fairly steep pitch seated, so I don't have to worry about stalling out. Standing up on the pedals feels different than on a roadbike - like I have to heave myself forward more forcefully to get my butt off the saddle - but once I got used to it, it was fine. And descending felt much, much nicer and less scary than I anticipated - the bike has an easy, tame feel to it when going around bends.

So... I think I am ready to try riding this thing to the lake and back. The path through the woods is winding dirt for the first part (with roots and things, but nothing too bad), then loose rough chunky gravel for the final stretch. There is nothing technical there, so if I can take 6 miles of straight climbing on a mountain bike and then not get scared and do anything stupid on the descent, I should be fine. And look: I will be using this bike for transportation to the lake, not for "mountain biking" as such, so please don't think this is the beginning of an interest in mountain bikes. I mean, that would be crazy.
Labels: mountain bike trails