On Cycling, Clothing and Skin Sensitivities 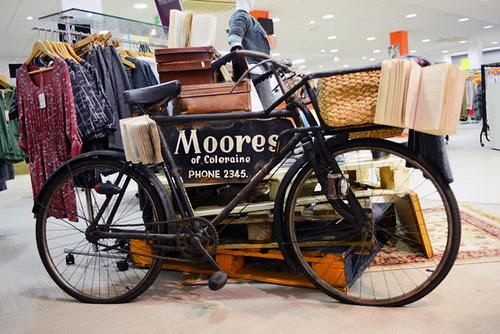 When discussing athletic cycling clothing, or even dressing for the bike in the context of utility cycling, I will occasionally mention being sensitive to certain fabrics. Because of this I get lots of questions from readers who are in the same predicament. There are those who find themselves unable to wear cycling apparel typically available in bike shops. There are also those who find that the fabric in their ordinary, everyday clothing - which was fine for driving and walking in - begins to cause problems once they start getting around by bike. Having had both experiences, here is my perspective after some years of cycling.

Firstly we all mean something different by "sensitive." Here is what I mean by it: When I wear certain items of clothing, my skin gets easily and dramatically irritated - to the point of rashes, abrasions or even lesions forming in the course of a single bike ride - in areas where the fabric contacts my skin. This does not appear to be a chafing issue, but more like a chemical burn or allergy type of reaction.

After nearly 5 years, I still cannot pinpoint precisely what causes it in my case. In the beginning, I believed it was "artificial fabrics" on the whole, so I tried to avoid them and wore only natural fabrics (wool, silk, etc.). But over time I learned that it is not a clearcut artificial vs natural fabrics issue. For example, I now know that I can usually wear lycra and spandex directly against my skin without any problems. My earlier assumption that I could not wear lycra was based on the fact that much of the cycling clothing casually referred to as "lycra" is in fact either partly or entirely polyester. It was the polyester I was sensitive to. This theory held true for a while, as I'd try different articles of polyester clothing and inevitably develop rashes. Even those wool/poly blends I usually cannot wear directly against my skin. Then again, one time I wore a jersey that was 100% polyester to which I had no sensitivity, even after a 60 mile ride in the summer heat and humidity.

Point being, these things can be tricky to figure out, so don't jump to conclusions. If you are sensitive to an article of clothing, it could be the fabric, but it could also be the dye, or some surface treatment used on the fibers, or some other factor entirely, or a combination of everything - including how these things interact with your unique body chemistry, and in particular, sweat (the latter would also explain why you might be entirely fine with certain fabrics when sitting around at the office or walking to and from the car, but not once you start pedaling and working up a bit of a sweat).

So, what do you do if you have skin sensitivity to cycling clothing? My first suggestion would be to eliminate chafing as the culprit. If your clothing is either too loose or too tight, this could cause abrasions from chafing that might be mistaken for skin sensitivity - I have seen it lots of times with local cyclists.

Once you are certain chafing is not the issue, pay attention to the clothing labels and see whether an obvious pattern emerges. Experimenting with fabrics is expensive, but many shops' return policies now are amenable to exchanges after items have been worn. And to determine whether it is the dye or surface treatment you are sensitive to, try washing the garment before wearing it again and see what happens. I recently tried some cycling-specific trousers that gave me a rash when I first wore them, but no longer caused that reaction after I put them through the wash a couple of times based on a friend's suggestion. And finally, for what it's worth, I think avoiding artificial fabrics remains a valid tactic.

Some of us can wear anything on the bike and don't see what the problem is. Others are frustrated by wasting money on clothing that irritates. Hopefully over time we figure out what works for us and what doesn't. In the meantime, there is always the second hand market - and trading clothing with friends!
Labels: clothing Monday Mailbox wool