Driving As a Cyclist

Until last week I had not been behind the wheel of a car since 2007. But I knew this day would come - the day I would want to drive again.

Over my years as a driver, the cars I've owned have always had automatic transmission - I never learned how to drive manual. When I mention this to an Irish friend, he shakes his head and roars with laughter. "Automatic!" He says it as if the word itself, used in relation to cars, is amusing in its absurdity. "Automatic?! Okay, so you never learned to drive properly in the first place. Well come on - I'll learn ya!"

And just like that, I am in the driver's seat. I feel ready for this, looking forward not only to being behind the wheel after such a long time, but specifically to trying the manual gear-shifting. And the funny thing is - this enthusiasm comes from being a cyclist, not in spite of it. 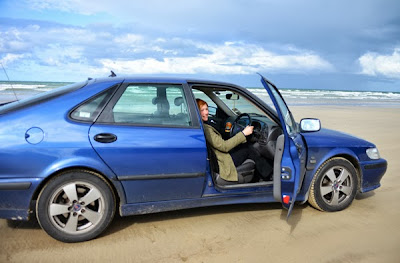 The 8 mile stretch of Benone Beach is like an unpaved extension of the road. Cautiously I maneuver the rickety Saab along the sand, my left hand on the gear shift knob, my senses heightened, trying to listen to the engine's sounds and feel the give in the clutch.

Things do not go as badly as I thought they might. I am not stalling out. I press the correct pedals. My hand is getting used to the positions of the gears, so that I can shift without looking. Operating the gear box makes sense, having gotten used to the concept and feel of gears on the bike. When the gear is too high, the car makes a straining noise - not unlike a cyclist grinding along at a painfully low cadence. When the gear is too low, the car feels as if it is spinning out, unable to pick up speed efficiently. It is not a perfect analogy by any means, but it is just enough to make sense. And I can feel that with some practice this will become intuitive.

I think of driving now differently than I did 5 years ago. Cycling is a very physical activity, and it has made me more viscerally aware of the mechanics involved in operating a vehicle. I think of driving as a serious skill, rather than a perfunctory action. When in the passenger's seat I now find myself more aware of the driver's technique and degree of control under different road surface conditions and speeds. Having worked so hard to learn how to handle my bike on winding mountain roads, I appreciate the handling skills involved in operating all vehicles - be they motorcycles, tractors or cars. Some of the people I know here are extremely skilled drivers, and I must admit that riding with them is exciting. I am impressed with the smoothness and precision with which they operate their complicated, heavy 4-wheel motorised vehicles. And if I do drive myself, I aspire to aim for the same degree of proficiency.
Labels: cars technique