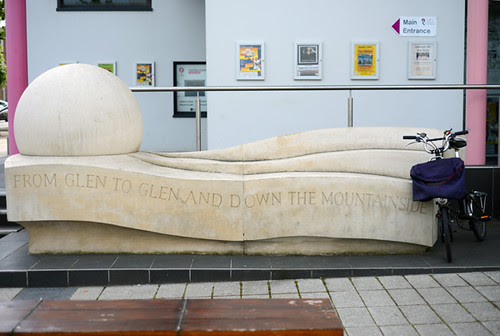 When we moved to the US in the early '90s, I promptly started junior high school in a small New England town. The first thing I remember about walking into the classroom, was the shock of green cardboard shamrocks strung up all over the walls and a large banner declaring "Erin Go Bragh." (That's not how you spell it, a friend from Cork would later wrinkle her nose. But never mind.) Our teacher was fiercely Irish, as were at least half of the students. Second or third generation mainly, and, truth be told, most of them ethnically mixed. But Irish identities had a way of dominating in those days - when the economic boom had not yet hit the Emerald Isle, when South Boston still had romantic notoriety, and when House of Pain's Jump Around played several times a day on MTV. Most chose to express this identity through visual iconology: shamrocks, leprechauns, bright kelly green, friendship rings, and abundant use of faux-celtic fonts. But soon fate brought the opportunity to also express it musically.

In those days, our school had a rather famous a cappella choir, led by our passionate and popular music teacher, Mr. McKenna. It wasn't just anyone who could join this elite group. There were limited spots. The annual tryouts involved weeks of preparation from hopefuls and bitter tears from those who did not make it. But those of us who made it... my goodness, we felt special. In the mornings, we went to choir practice instead of home room. We wore beautiful uniforms. We stood side by side, in a tight formation on metal risers. Labeled a strong Soprano, I still remember my place: 3rd row, 5th from the right. Our choir recorded albums. Our choir preformed in competitions and won. Once a year we even travelled to compete in the national finals, inevitably returning with medals.

We were one of the best, Mr. McKenna would tell us, again and again, beaming at our fresh-scrubbed teenage faces, our teary eyes and our chapped lips from hours of singing. And we were one of the best because we worked at it. Because we rehearsed until each piece was perfect. And if it wasn't perfect (his face would turn serious now, almost stormy), we did not perform it. Not at a local Christmas concert, and certainly not at competition. Was that understood by each and every one of us? It was.

The national finals happened in May. Competing choirs would select their performance pieces in September, then spend the entire school year rehearsing them. The year I entered the 8th grade, Mr. McKenna gathered us to announce the competition selection with an air of festivity: For our main piece, we would be singing Danny Boy. As he distributed the sheet music, it was clear that the piece was very, very dear to him.

With tears in his eyes, Mr. McKenna talked about Ireland. How beautiful it was and how special his visit there with his wife and children had been - a place where his great grandfather had once lived and farmed. Later, as we struggled with the song, he talked about visualising the glens and imagining Danny Boy's plight. We tried our best, although most of us did not know what glens were exactly.

It was a beautiful, but complicated piece. Or maybe the arrangement Mr. McKenna had chosen was complicated, his judgment clouded by a reverence for the song's Irishness. Overly nuanced harmonies, notes held too long for our young lungs, sharp transitions from low notes to high. We were a good choir, but we were amateurs. We were a motivated bunch of kids, but we only had so much energy to give, after our classes and homework and turbulent teenage love-lives.

Having come down with the flu, I did not join the choir in that year's finals. I did not witness the mass hysteria and weeping after, for the first time in its 12 year history, our choir failed to earn a medal at the competition. I only saw my peers' dejected faces when they returned home empty handed. I only saw the careless wrinkles in their uniforms at our next local performance and the way they slouched on the risers, with Mr. McKenna not bothering to chide us for either transgression.

We never talked about it. But deep down we all connected our choir's fall from grace with this attempt at a perfect rendition of Danny Boy. The piece was simply too personal, too precious for Mr. McKenna; he gave in to the rawness of his emotions and lost perspective. The following year, when I was already in high school, we heard that Mr. McKenna stepped down as music teacher and moved away. We were told he had health problems, and there were whispers of a nervous breakdown. It was not until years later that we learned he divorced his wife of 30 years and married one of his former students (by then a high school graduate, aged 19), which prompted parents to call for his resignation.

I have not thought about any of this in years. But I think about it now, in the mornings, as I lock up my bike in the town center of Limavady, Northern Ireland. There is a contemporary sculpture next to the cafe where I like to work. It is vaguely glen-shaped, in an abstract sort of way, and engraved with the lyrics to Danny Boy. Across the street is the colourful Corner Bar, its walls painted with murals containing more references to the song. And a helpful inscription explains the connection: "It was in Limavady that the famous melody 'Danny Boy' was noted down by Jane Ross from a tune played by a blind street fiddler named Jimmy McCurry." The original name of the melody was actually Londonderry Air, written by Englishman Frederic Weatherly. But never mind. It's been 20 years since I sang Danny Boy and I still remember the lyrics.
Labels: Ireland stories