What About the Movies? 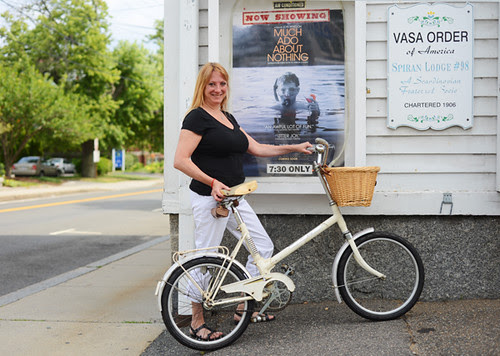 "Okay. But what about the movies?"

It is one of those circuitous conversations about whether bikes stand a chance in mainstream culture. The kind of conversation that inevitably raises the point that American cities are not Amsterdam. Or Copenhagen. Before moving on to differences in fuel prices, weather conditions, standards in hygiene and typical commuting distances. Quick to tire of this topic, I sip my wine - inserting the occasional comment on autopilot. But now this movie thing is a new twist and I perk up.

"Can you imagine bikes instead of cars in movies? I mean, that would be ridiculous!"

We run through the gamut of pop culture classics that would not be the same carless. James Bond. Ferris Bueller's Day Off. Back to the Future. Pulp Fiction. The list goes on. Re-imagining some of these with bikes replacing cars proves a great source of entertainment. National Lampoon's Vacation with the dead grandma strapped onto a longtail cargo bike. Law and Order SVU, with Olivia and Stabler as bike cops (okay so that's a TV show, but still).

But it's not just about specific movies. It's entire scenarios, concepts. The summer road trip. The iconic car chase. The drive-in and the drive-through. The dead body in the trunk. Romantic joyrides in convertibles. Disastrous family vacations. High school students cruising aimlessly as they come of age in towns where no one understands them. Tragic couples, well-dressed and adulterous, exchanging looks of yearning in the dim light of the dashboard. Secret agents and mobsters getting in and out of each other's sedans in abandoned lots under rusty bridges. The entire kitsch horror genre that relies on teenagers smooching in the back seat, oblivious to the crouching axe murderers ready to prey upon them. And of course there is that scene, where the sleek black Porsche (or maybe it's a BMW) pulls up and, as the driver comes around to get the door, the camera zooms in on a pair of women's legs stepping out - just the legs, in stiletto heels and perhaps black fishnet stockings - a moment in which we, the viewers, know that the creature who emerges will be beautiful and mysterious and utterly unattainable - destined to become the main character's love interest.

Do you mean to take this - all this - away from us and replace it with bikes? that sporty, politically-correct contraption devoid of sex, drama and suspense? That is the panicked subtext of all this movie talk.It is almost as if we're discussing the possibility of some big, bad Bike Lobby censor editing out cars from all our favourite films and TV shows.

I never know what to say to those who view bike culture as threatening to car culture, and this is no exception. Look, I don't want my Ferris Bueller and Pulp Fiction ruined with bikes either. Jokes aside, it's absurd to imagine bikes in existing films where the cultural context for them is all wrong. Just like it's absurd to imagine films with period-inappropriate clothing, dwellings or slang. But if bikes become more normalised in society over time, things will change - not forcefully, but organically. Bike-centered cultural scripts will emerge and take root, upon which scenarios of future films could be based - complete with naturally-occuring sex, drama and suspense. It does not seem like such a difficult concept to me.

And the thing is, Vincent's suit in Pulp Fiction aside, it's not all black and white. Don't you remember, when they were talking in the car, how he'd just gotten back from Amsterdam? If you think about it, he probably rode a bike there. In that suit and everything. Briefcase full of drug money dangling off the handlebars of a borrowed opafiets, a miniskirted lady-friend perched on the rear rack... Okay, so it's not in the movie. It was 1994 after all; they didn't want to shock the American public with bikes. But it's implied, okay? Subtly implied. It sets the groundwork.

And with that image, everyone seems appeased. Maybe the movies are safe after all.
Labels: films social commentary transport transportation options