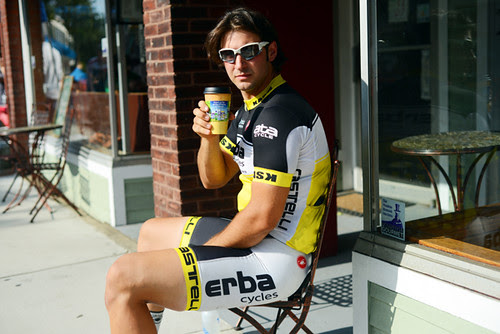 Looking straight at her, he said it with nonchalant sincerity, nodding in approval for emphasis.

In response she gave him a startled, almost bewildered look. As if caught off guard by his directness. As if to say "Hey buddy, this is a cycling club, not a night club. And don't you know any subtler flirting tactics besides?"

Witnessing the exchange I had to suppress a laugh. When this phrase was first said to me on a ride, I did not know what to make of it either.

Of course the guy was telling her she looked good on the bike. That her position was good, that the bike fit her well, that she had good form. It's all in the tone and in the look. Once you get used to this pronouncement in a cycling context, it's hard to mistake for flirtation. But the first time it does catch you off guard. "You look good." Just like that, huh?

I don't tell other cyclists they look good on the bike when we ride together. I don't feel ready. What do I know good form from bad? Yes I see things, and I think it to myself. But it wouldn't be right to say it. The compliment must have significance.

But when I have my camera the dynamic changes. I tell riders they look good then, and it takes on a different meaning: happy, radiant, picturesque. Maybe they have a contagious smile. Or an intriguing frown. Or the light through the trees is falling on their face just so. Or the colour of their bike interacts perfectly with the colours of the bench they are standing beside. It feels natural to say it then, looking through the lens of my camera. "You look wonderful." Or "That's beautiful - thank you."

And there are times when I know not to say it. Just like sometimes I know not to point my camera. Even though the scene looks perfect, I just don't.

The human gaze is such a complicated thing. It communicates interest, care, the acknowledgement of the other, but also scrutiny. We want to be gazed upon to some extent, but there is always a line beyond which we don't. In cycling, the gaze is ever present - focused on each other's bodies, movements. Sometimes it is silent judgment. And sometimes it culminates in "Hey. You look good." In response to which I simply say "Thanks" and continue to pedal.
Labels: roadcycling stories