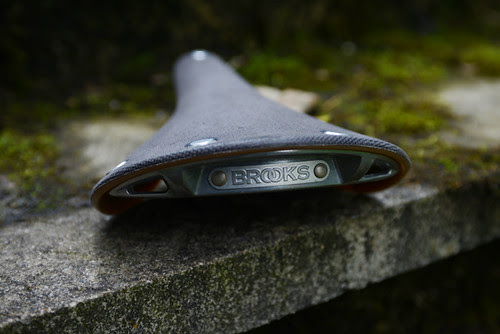 Earlier this year Brooks surprised their fans by announcing the release of a non-leather saddle: the Cambium C-17. Selected to be one of the beta-testers, I must have been in the very last wave of recipients, because the saddles have been out for months now and mine arrived only last week. About to head back to Ireland, I threw it in a suitcase and, after several days of jetlag, have now finally managed to get a good look. I have not tried the Cambium on a bike yet, but wanted to post some shots and first impressions, figuring many of you are as curious as I was. And there is good reason to be curious: The Cambium is quite a departure for Brooks of England - a storied manufacturer whose very claim to fame is its leather saddles. 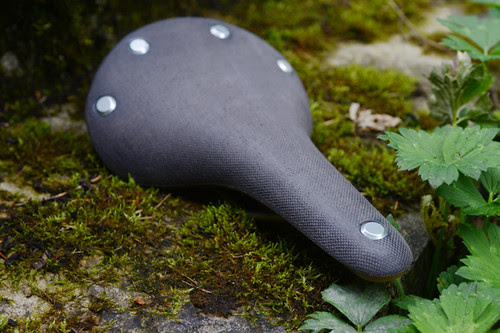 As Brook describes it, the Cambium C-17 is made "from vulcanized natural rubber and organic cotton enhanced by a thin layer of structural textile for added resilience." Considering this is a bike saddle, I'd assumed the fabric would be treated with something to make the surface smooth. But the surface has a distinct texture to it similar to that of artist's canvas or some types of denim. While it's been treated for stiffness and waterproofing, there remains a bit of tooth to it. For that reason I have to admit, I am reluctant to try this saddle with lycra cycling shorts - which can be delicate and abrasion-prone in the seat area. But I'll do it, and will let you know how it goes. 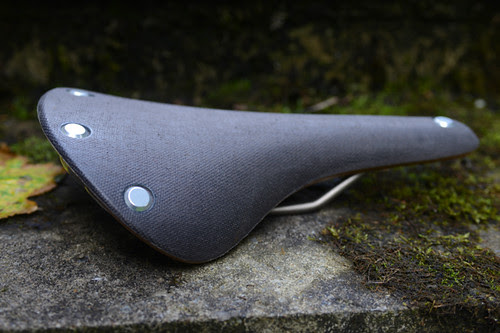 As far as looks, the one word that comes to mind in describing the Cambium is "subtle." This is a minimalist, low key saddle, not an ostentatious one. The colour of the cloth is half way between gray and taupe. In person, it can look either charcoal gray, ashy brown or even mauve, depending on what it's placed next to. This is rather nice, in the sense that it will match pretty much any bike. The brooks logo is stamped tone on tone into the rear of the undercarriage and is only noticeable close-up. The metal bits are matte, almost dull. The overall shape is somewhere between a Brooks B-17 and an '80s style vinyl racing saddle. 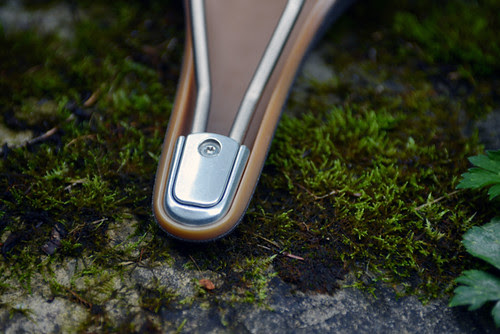 I did not receive any special insight into the Cambium's construction from Brooks, so I am just describing what I see. It looks like the undercarriage is modular, similar to Berthoud, with (rivet-shaped) screws instead of rivets. 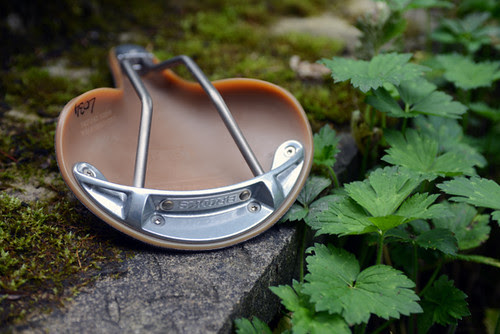 The matte metal resembles titanium, but it is not labeled or described as such, so I assume it is cro-moly. 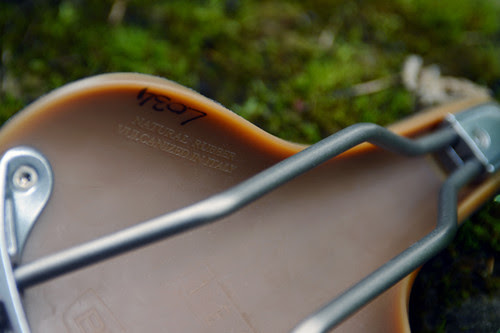 Stamped "natural rubber vulcanized in Italy," the saddle is extremely flexible - I can easily bend and twist it with my hands. I imagine Brooks was trying to replicate the hammocking/ suspension qualities inherent to their leather saddles, and this was the solution they came up with. I am eager to experience the feel of this on a bike - especially on bumpy roads, chipseal and gravel. 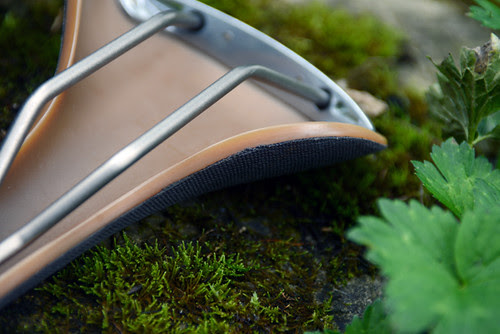 The surface layer of cotton fabric is cut to form and glued onto the rubber. While the construction looks to be top notch, one potential problem I can see, is that over time the edges might begin to lift. Only long term use can determine whether this proves to be the case.

As I see it, the potential appeal of this saddle is two-fold: Those who do not use leather for ethical reasons will welcome a non-leather option from Brooks. And those who dislike how much Brooks leather saddles change shape over time might prefer the stability of the Cambium's construction. It is also interesting how Brooks went with natural, rather than synthetic materials in constructing this saddle, in keeping with its usual aesthetics. The C-17 will look good on a wide range of bikes, classic and modern.

Well, that is all for now. I am going to try this saddle on a semi-upright pathrace-style bike, then on my roadbike, and report back in a couple of weeks. If you have any questions in the meantime about the construction, shape or aesthetics, feel free to ask. In fairness to Brooks, I would like to note that I was not asked to write about the saddle on this blog or to publicise it in any way; my role as a beta-tester involves only private feedback. I believe the Cambium C-17 and C-17S will be available for sale in September, as a limited edition release. You can see its full specs, as well as read feedback from those who were in the earlier waves of testers, here.
Labels: product reviews saddles