The Bike Shop Next Door 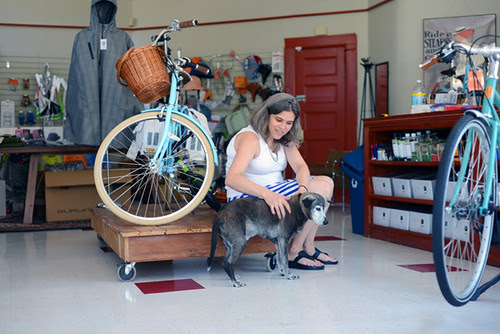 It is the hottest day of the summer when I visit the finished space - a space I have watched transform from a dusty vacant storefront around the corner from my house, to Boston's only transportation-oriented bike shop. Carice and the Small Brown Dog are basking in the morning glow of the homey sun-drenched interior. The newly installed air conditioning is blessedly strong. The phone rings, and it appears that someone wants to order a bike. It is official: Bicycle Belle is open for business. 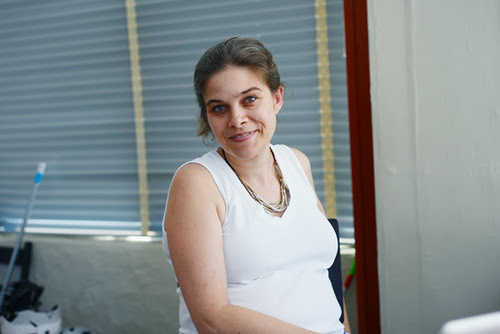 I have known Carice for about 4 years now - an architect, local bike blogger, DIY addict and lover of vintage 3-speeds. On occasion, we would meet for tea. Funny to think it was only months ago that, engaged in that very activity, we discussed taking the cargo bike plunge. She was considering buying a Dutch bakfiets. I was leaning toward an Xtracycle Radish. We debated the pros and cons of each. 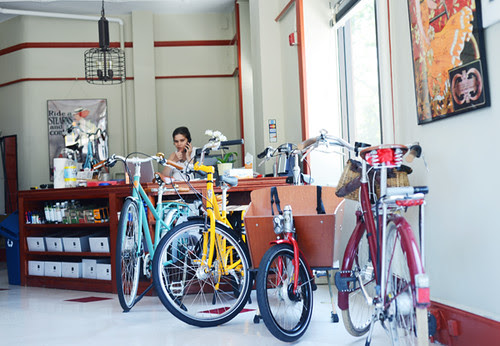 Now both cargo bikes stand side by side in her very own retail space. It was that quick: from idea, to decision, to action, to completion, in just a couple of months. And yet, what happened felt neither hasty nor impulsive. Sometimes an idea develops dormantly, swirling around under the surface for years, ripening, just waiting for something to crack that surface open. In the Spring of 2013, Carice felt that something and the idea became reality. And once the decision was made, her organisational skills, work ethic, and industry contacts from years of bike blogging, made everything happen swiftly. A bit of luck with the retail space cinched the deal. 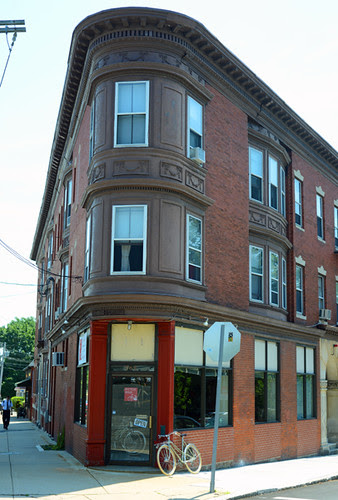 The retail space had several compelling qualities to recommend it. First, the address. Situated on the border of Somerville and Cambridge (quite literally: half the building is on one side of the town line, half on the other), it sits at the start of Beacon Street - a bicycle super-highway through two of Boston's most bike-friendly boroughs. With its triangular footprint, the structure is distinct and no doubt an architect's dream. Windows on all sides, the interior is penetrated by gorgeous natural light. The wrap-around storefront also makes the wares on display highly visible to local traffic. 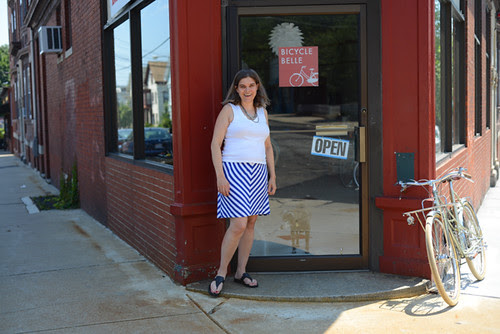 Finally - and rather remarkably - the space was available for immediate occupancy. Carice saw an opportunity and took it. 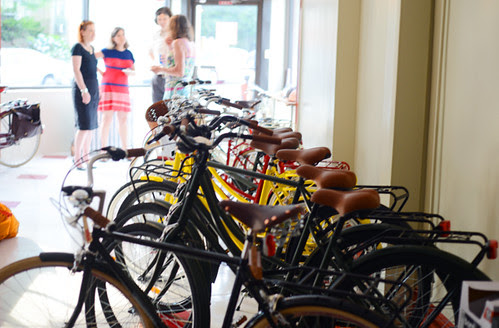 At the start of July Bicycle Belle was soft-launched under the slogan "cycling for city life." At present, the core collection includes transportation bicycles from Bobbin, Papillionnaire, Beater, Paper Bike and Soma, cargo bikes from Workcycles, Xtracycle and Kinn, and a slew of accessories from the likes of Basil, Brooks, Cleverhood, Vespertine, Yepp, Burley, Iva Jean, Velo Orange, et cetera. With utility/ transport/ city/ family bikes (circle your preferred term) more popular in North America than ever, there is nothing unusual about the inventory - save for the fact that a store with an exclusive focus on this market did not already exist in Boston, a major US city teeming with bicycle commuters. 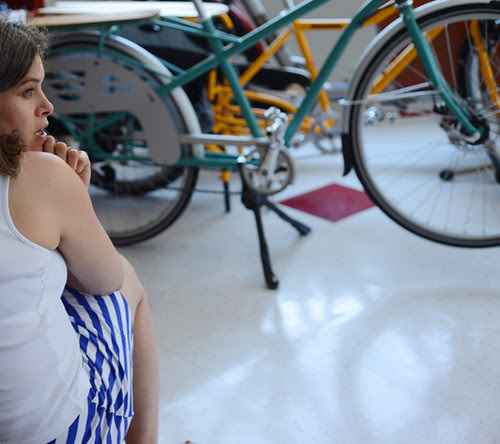 Over the years, many of us have wondered why that was so. Not only was there no transportation-specific bike shop, but many shops that did try to carry some of that merchandise would often drop it after only a year or two - citing lack of local interest. "Boston is too aggressive of a city for these types of bikes" bike shop owners have told me - meaning cargo bikes, utility bikes. And yet, more and more of "these types of bikes" kept filling the streets. Clearly locals were buying them, and they were traveling out of town to do so - or else ordering online. Bike shops in places as remote as Oregon, Florida, California and Washington State have reported routinely selling bikes to customers in Boston.

One possible explanation for the discrepancy, is that the shops citing a lack of local interest have not been sufficiently "into" utility bikes to successfully sell them. When you don't fully believe in a product, customers sense that and failure can become a self-fulfilling prophecy. By committing wholly to the utility bike target market, Bicycle Belle hopes to experience a more positive response. 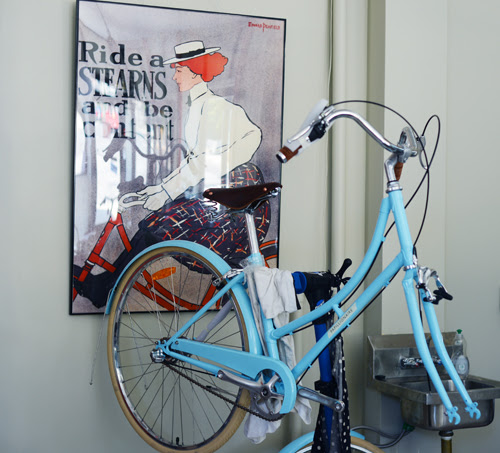 Will the approach work? After only weeks in business, it is far too early to tell. It's worked for a dozen or so successful city bike shops that have sprung up throughout the US. But there are also those that have failed. Since opening its doors, Bicycle Belle has received a healthy amount of orders. But initial buzz does not mean long-term success. In other words: Let's wait and see. 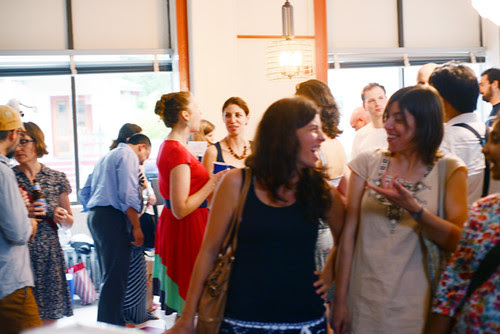 Last Thursday night, Bicycle Belle held its official opening party. Due to limited space, it was intended to be a semi-invitational, low key affair. Yet the turnout was impressive and the atmosphere charged with excitement. 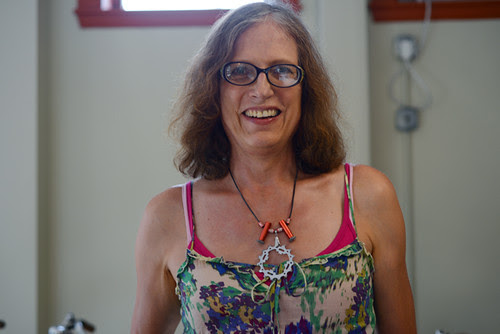 It was good to meet local activists, such as Jessica Mink. 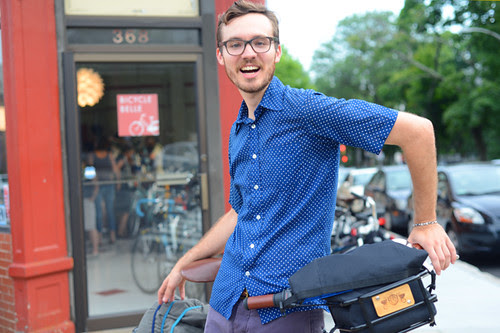 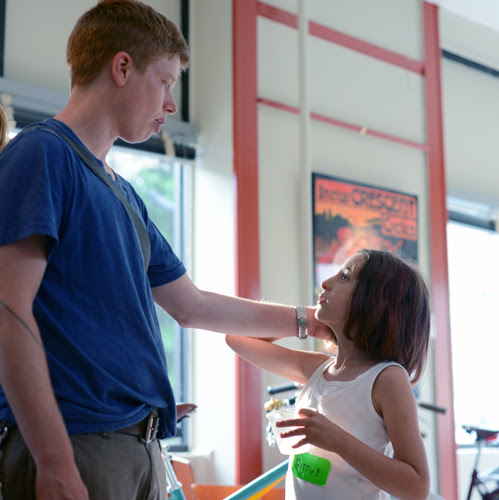 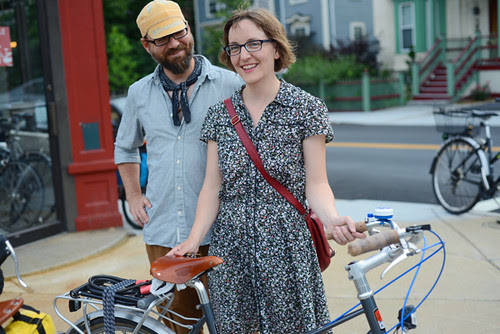 There were also plenty of familiar faces, including cartoonist Bikeyface and fashion model Vorpal Chortle. 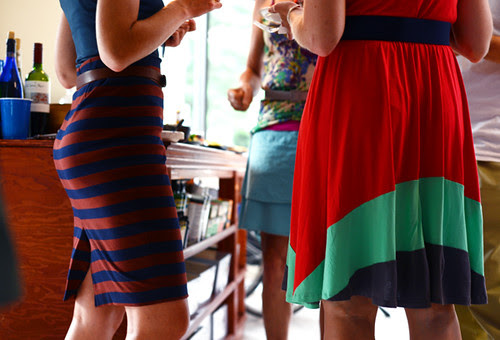 Many of those in attendance were dressed up - lots of skirts, heels, suits - all arriving by bike of course. 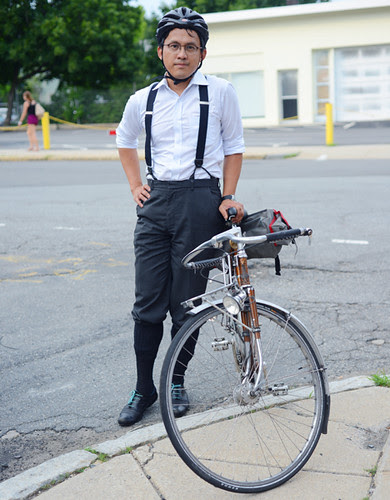 At first I thought they'd dressed up for the party, but actually this was simply what people had worn to the office, since the party was immediately after many finished work. 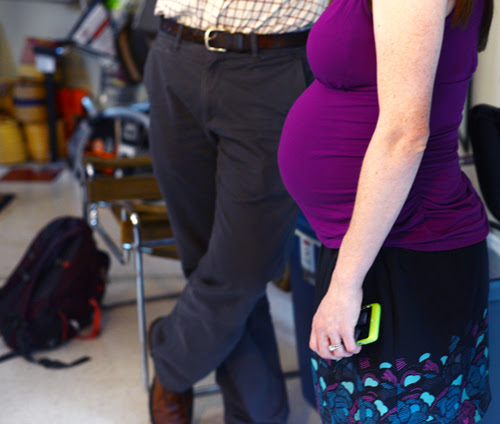 Another trend of the evening was pregnancy - I spotted at least half a dozen pregnant cyclists in attendance. (Perhaps a future group ride theme?) 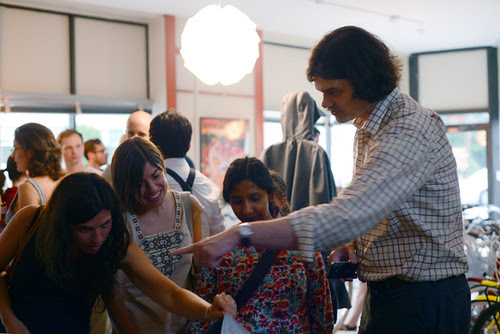 It was a good evening of wine, food and sparkly conversation, that showcased Boston's utility and family bicycling scene. 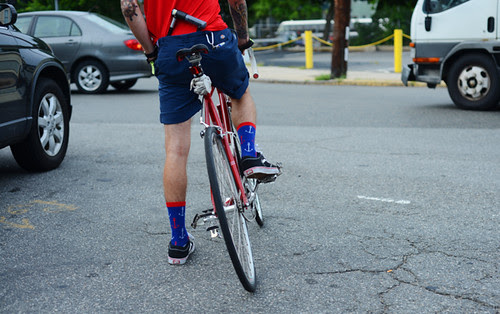 And all the while, outside, a steady procession of cyclists could be observed through the storefront windows. 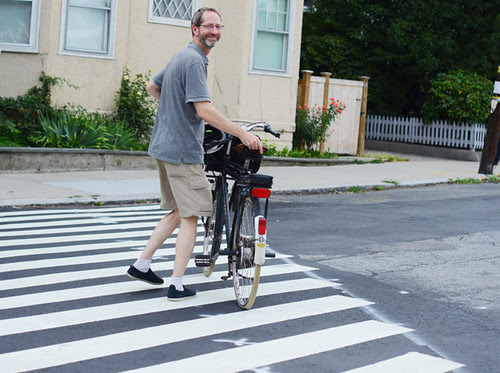 Business as usual for the end of the workday commute down Beacon Street. 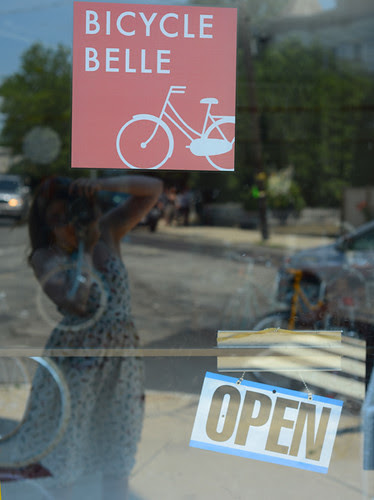 Local reactions to Bicycle Belle have been mostly positive, of the "It's about time!" variety. As anyone in the industry knows, a bike shop is never a get rich scheme - not even close. But the business must prove sustainable, and I sincerely hope this one does. Boston has been crying out for a resource like this for some time, and it's exciting that we finally have it - in my very own neighbourhood, no less. If you're in the area, drop by and pay the Bicycle Belle a visit! More shots of the space and opening party here.
Labels: bike friends local bike shops