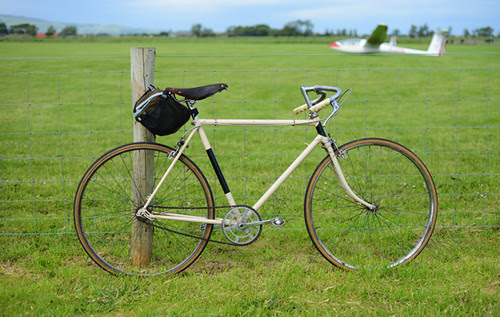 A friend of a friend flies gliders at the Ulster Gliding Centre down the road. I was encouraged to visit. "He used to race bikes. He restores old planes. The place is amazing, you'll love it."

Terrified of flying and armed with only the vaguest notion of what gliders actually are, I nonetheless head over there one evening. The phrase "restores old [fill in the blank]" proves to be excellent bait. In honor of the occasion, I ride a 1938 Tyrone Flyer, handmade in Northern Ireland. Astride the 75-year old machine, I race down the winding coastal road, at length turning onto a narrow lane toward the Lough Foyle. I ride past pastures, chicken coups, a thatched cottage, and a field of parked caravans, until finally a meadow comes into view - spread out along the water's edge and littered with small aircraft. From a distance the scene resembles a vegetable patch. 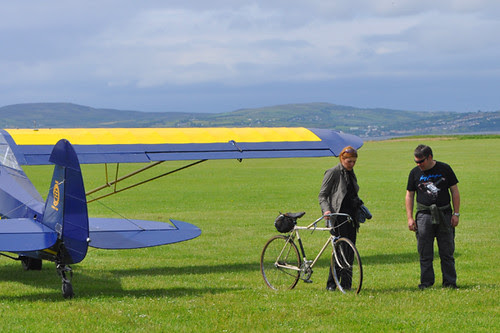 By the hangar, Owen waves me through, bike and all. We exchange greetings and straight away his eyes are on the bike. 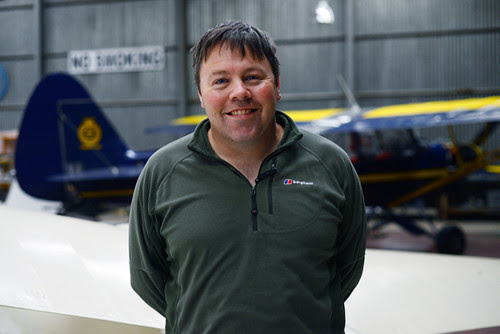 Owen used to race 100 mile time trials. He was good, right up there at the top. Then he stopped. But I can see the cycling has not left him. If he sees a bike, he can't not look at the bike. Then it's my turn to look at the planes. 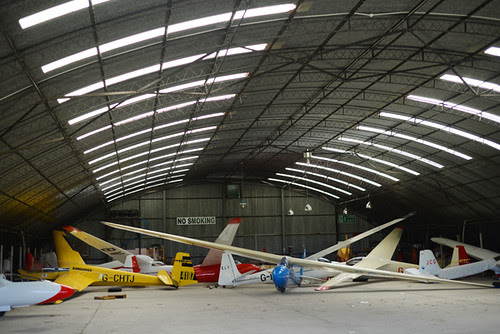 A hangar is basically a garage for aircraft. This one is dome-shaped. The interior is well illuminated. There are little planes everywhere and I wander through them as if through a forest, stepping over tails and wings as if they were felled tree branches. Some planes are colourful and others are white, some fairly new and others quite old. Owen restores the old ones. 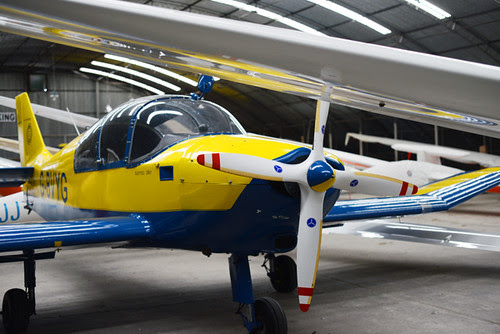 I ask about the materials, the paint, the provenance. Most of the machines are British or German, WWII era. We talk about plastics, and how they've changed over the years (a topic I'm familiar with from my fountain pen collecting days). Then he shows me the cloth used for wings - stretched so tautly and painted over so smoothly, I would never have guessed it was cloth. 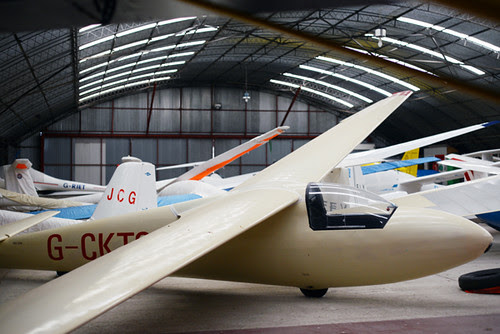 The planes are so light and small, they seem toy-like. "I could take you up in one of these if you like?" I shake my head in horror, which I quickly try to disguise as a polite "I wouldn't want to impose." 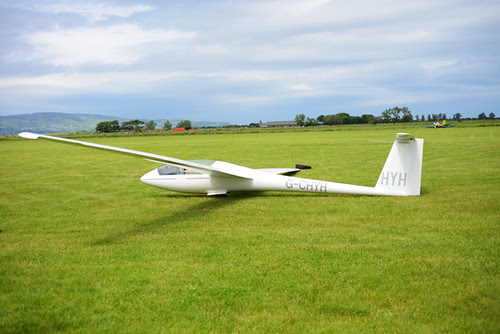 So what exactly is a glider? Put simply, it is a small airplane without an engine. A non-motorised plane. Visually, gliders can be distinguished by their lack of propellers (although there are also motorised gliders, which do have propellers) and their unusually long wings. 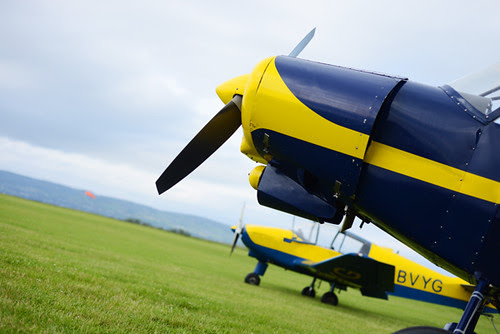 Because a glider does not have an engine, it cannot take off under its own power and relies on a tow-plane to bring it up to the desired height, then release it. 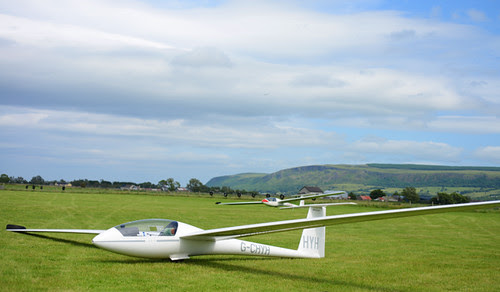 Once airborne, the glider uses streams of rising air (thermals) to prolong the flight, as the pilot steers it. In this manner, the glider can stay up in the air for hours and even travel cross-country. "Cross country without an engine?" I said, growing interested in the mechanics of the thing.

Long story short, I ended up in the glider. Owen - as most of the pilots there - has such a steady, reassuring manner about him, that the more we chatted the more it began to seem like a good idea - just a normal way to spend an afternoon. "There's no engine, so nothing can go wrong, you see. It's a bit like cycling really. Take your camera!" Yes, it would be like cycling.

I was feeling pretty good as I approached the glider, until another pilot - Gary - handed me a parachute. "Here, put this on." I must have turned white and begun to inch my way backward (OMG why do I need a parachute??), because Gary sort of held me in place and swiftly began to put the parachute on for me, cheerfully instructing me on its usage while gently nudging me into the glider. "There. It's like getting into the bathtub."

In fact, the thing is sort of canoe-shaped. The pilot/instructor sits behind the student/ passenger. There are duplicate controls. There is very little room, and once the top is down, you feel sealed off from the rest of the world. Once I was in it, my attitude was - If you're gonna do it, do it. Otherwise don't do it. No point being scared now. 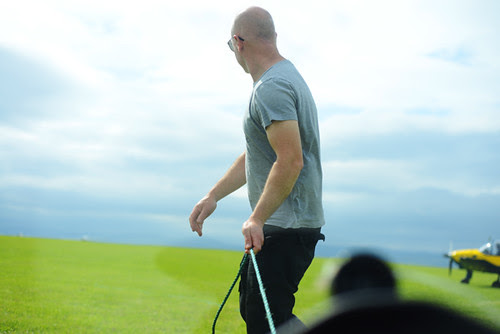 As Owen began to rattle off a series of mysterious control-check messages into the radio, Gary grabbed the rope attached to the glider's nose and connected it to the tow-plane.

This is what it looks like to be towed along the grass runway. We are taking off toward Lough Foyle. 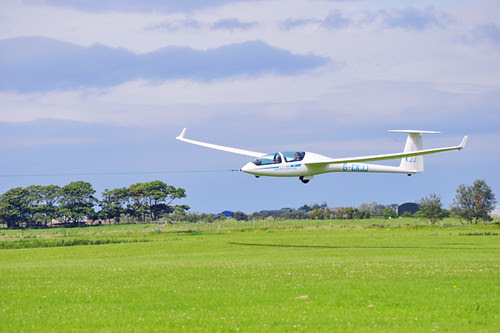 Here is the rope. 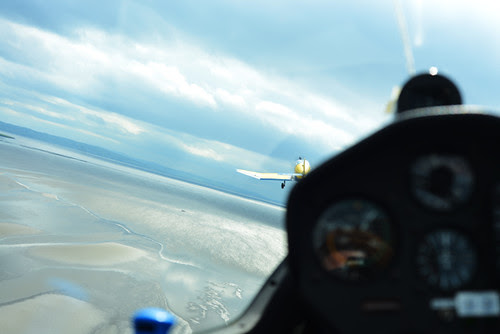 The take-off is quick and painless. Before I know it, we are being towed through the air. 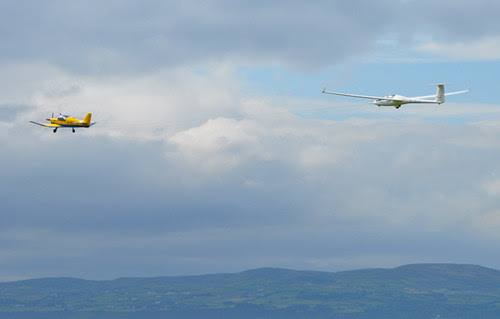 View from the ground. 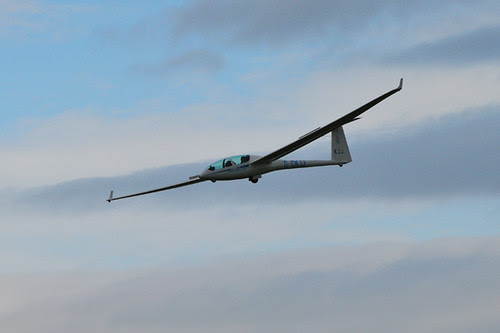 Finally, the rope is released. The tow-plane returns to the ground and the glider - well, it glides. I am in a small plane. Everything is completely silent. We are floating, coasting really. I am feeling fine. Calm, downright serene. 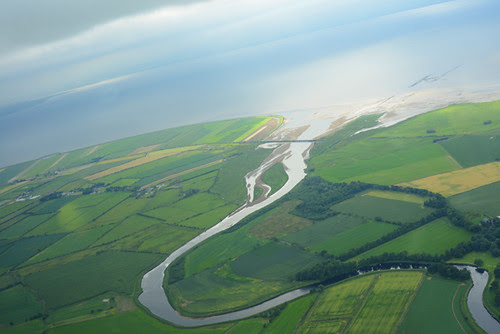 The landscape spreads out beneath. Familiar places from an unfamiliar vantage point. In that sense, it really is a bit like cycling. In an abstract sort of way. 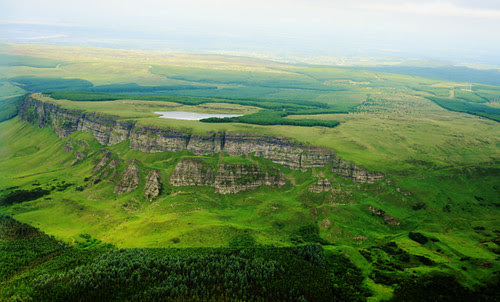 We fly along the coast, then turn inland and head to Binevenagh Mountain. Owen explains how to work the controls to make the plane bank, turning it around. It makes sense and I give it a try. The plane turns. And there is Binevenagh, half submerged in shadow from a low cloud, half illuminated by intense sunshine. It looks quite tame from here, flattened out against the landscape. My heroic climbs and descents hardly seem like an accomplishment now.

On the very top of Binevenagh is a mysterious lake. It is up a rough gravel road and I've only made it up there once so far. The lake is eerie, prone to mists and unusual growths around its edges. When you're standing next to it, it looks as if it is about to pour off of the edge of the mountain. 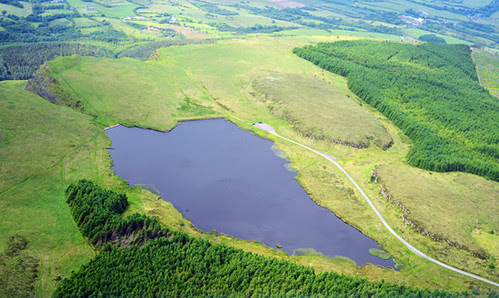 But what you don't see from the ground, is that the lake is distinctly heart-shaped. It is also nowhere near the edge of the mountain when viewed from an aerial perspective. 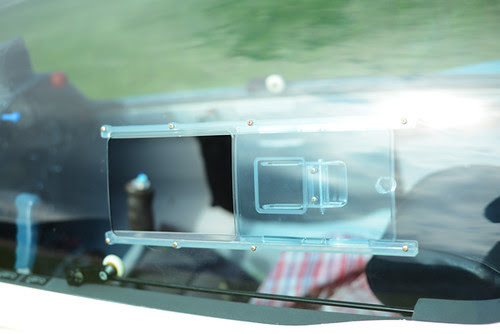 My camera is with me in the glider. There is a small window that slides open to stick the lens through. I've no experience composing aerial photos, and my 50mm lens is all wrong for the task. Even as I take them, I know that my pictures will look generic, uninteresting. But they are mine and I take them with the same genuine enthusiasm as anyone would. 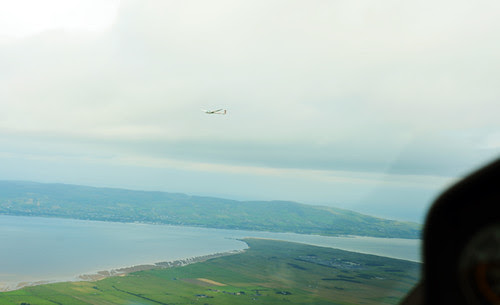 The sun fades gently in the silence. Over Magilligan Point, we see another glider in the distance and wave to them. Everything is beautiful. "You all right?" Owen asks. Yes! This is wonderful. "Want to try a Chandelle?" he says. "Oh. What's that?" It's a maneuver. A bit of fun. Not quite aerobatics, but almost. "All right!"

The glider does something that is part spin, part freefall and part loop. I see clouds. I am not sure which way is up. I feel pressure in my temples and my vision starts to go dark. A split second later, I am drenched in a cold sweat and hit with a wave of nausea. I sit very still and take deep breaths. "How was that?" Owen asks from the back seat. "Mmm hhmm hhmm!" I reply, mouth closed, worried I will puke all over the nice glider if I try to form sentences. Point taken. No more aerobatics. As the sun sets, we descend. 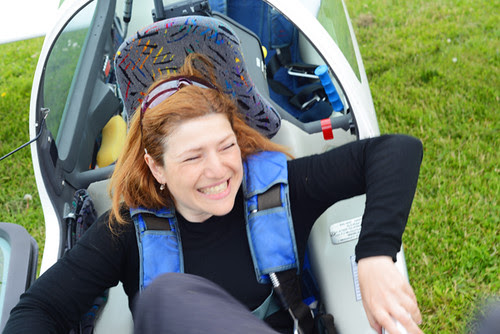 On the ground, I am soaking wet - hair, clothes, everything. Weird, the physical reactions we have. I don't remember feeling scared, but my body must have decided otherwise. We have a laugh about it. Then we steer the plane down the grass runway toward its next tow. 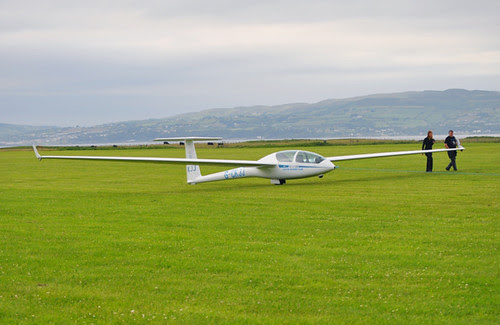 Is gliding anything like cycling? Hmm, I don't know. Maybe the feeling of landing is similar to that of a long descent. The view can be similar too. But on a bicycle everything feels open, whereas in a glider you are closed in, closed off - a bit claustrophobic for me. Not that I don't want to do it again. But perhaps no Chandelles just yet. It could be a useful skill, knowing how to fly light aircraft. 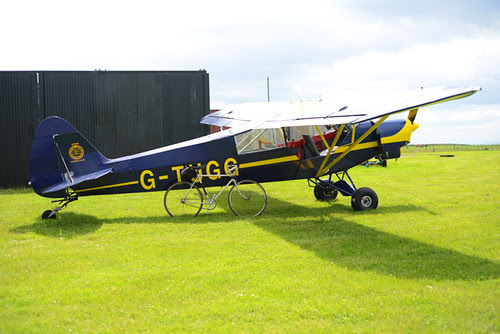 Some day. But for now I get back on the Tyrone Flyer. I pedal uphill, coast downhill. That is more my style of gliding.
Labels: bike friends Ireland stories vintage