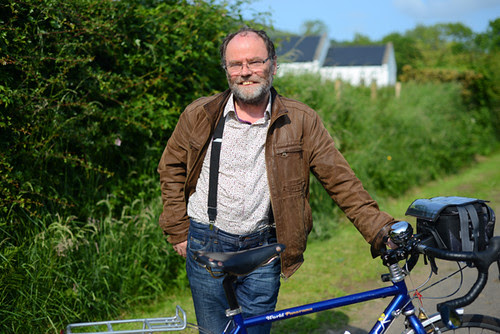 It is a clear afternoon after a long spell of rain, and I am sitting in the front room, trying to work. Although really I am looking out the window as I wait for my guest. He is taking the train from Belfast, then riding his bike the rest of the way to my rural dwelling. I have given extremely detailed directions and hope he finds the place okay. The kettle is on. I compose myself. I will keep it cool upon meeting him, and by no means will I act like an excited 12-year old. As I tell myself this one more time, I hear the unmistakable ring of a bicycle bell. 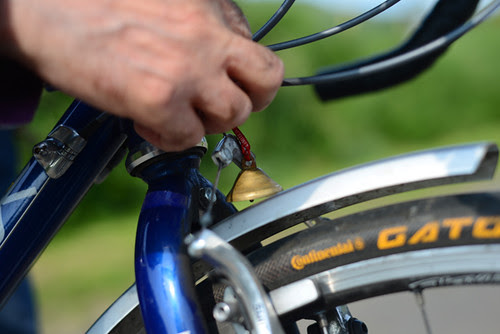 Last year I posted a review of the book On My Own Two Wheels by Malachi O’Doherty - a Belfast writer who rediscovered cycling in his 6th decade of life. As part of his plunge into all things bicycle, Malachi had been reading my blog. Unbeknownst to him, all the while I had also been reading his writing - on the conflict in Northern Ireland. His books on the subject are a unique mix of personal and political, morphing effortlessly from sharp social commentary to novelesque memoirs, complete with details of his sex-life. Starting with I Was a Teenage Catholic and The Trouble with Guns, I went through the books one after another. I was drawn to Malachi's writing not only by the topic, but also by how organically he intertwined such seemingly disparate genres. I have done some political writing in the past, including co-authoring a (tearfully dry and boring) foreign policy book. But more recently, I've been working on some fiction/memoir type writing, which has been profoundly messy and frustrating. Reading Malachi's work helped me see that what I thought was impossible to write about, on my own terms, was in fact possible. Of course I never dreamt of approaching the author to discuss any of this... until we "met" through Lovely Bicycle. Life indeed can be stranger than fiction. 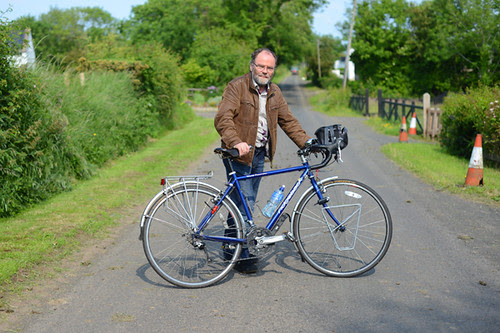 Now I'm in Northern Ireland, and Malachi O’Doherty is outside - in person. He looks friendly, simultaneously distinguished and youthful, and slightly out of breath. He is wearing a leather bomber jacket over jeans and a flannel button-down, an outfit in which he'd cycled 15 miles in the heat. At this moment I forget he is a writer whom I am eager to meet, and relate to him as cyclist to cyclist. I come out to greet him and examine the bike so vividly described in On My Own Two Wheels. It does not disappoint. Decked out in all manner of commuter and touring accessories, the steel blue Ridgeback stands out from the sleek racing bikes that fill the country roads around these parts. 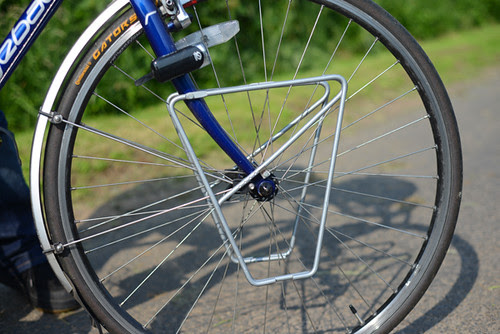 There are lights on every braze-on, and racks galore. 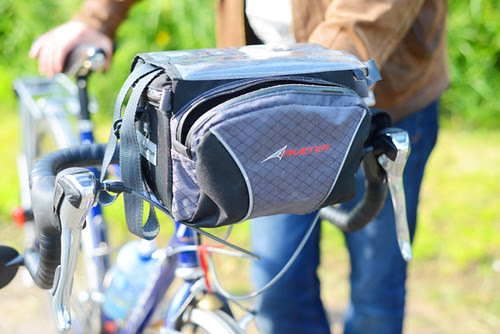 There is a handlebar bag, strategically positioned above the external cables of the Shimano shifters (notorious for interfering with handlebar bags). 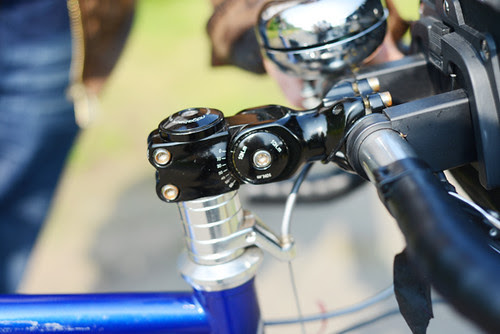 There is an adjustable stem. 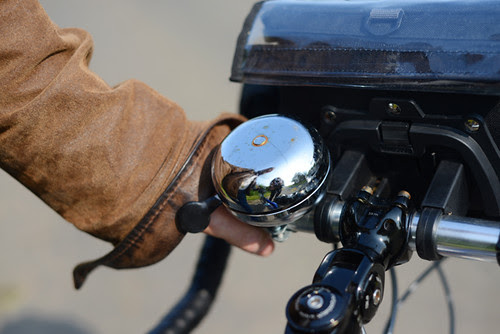 An enormous roadster-style bell is mounted to the drop bars 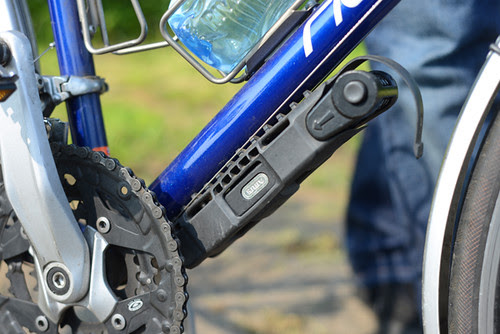 A heavy duty foldable lock graces the downtube in leu of a 3rd bottle cage. 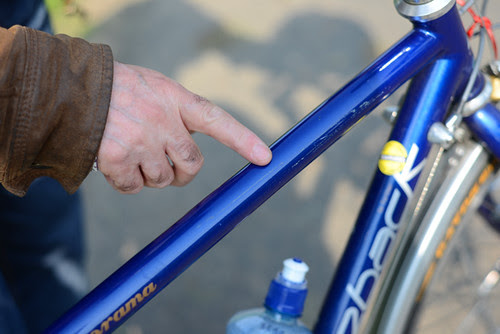 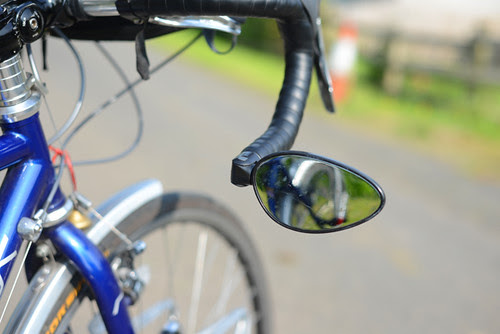 A bar-end mirror is mounted so low I am compelled to ask whether he can actually see out of it ("Nah, not really" Malachi laughs.) 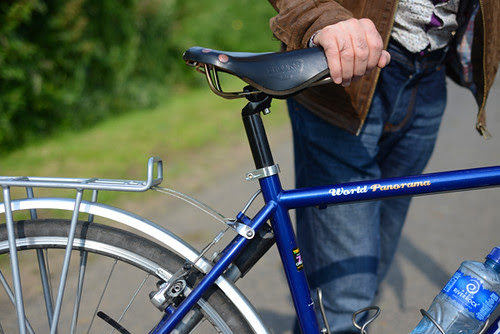 But the pièce de résistance is the forward-set saddle - which lends the modern touring bike an air of an antique pathracer. Malachi explains that, after some time, the bike's fit felt simultaneously too big and too relaxed. So he simply reversed the seatpost to solve both issues.

Overall, the bike comes across as both amusing and somberly dignified - which I suspect is how the owner intends it. For over tea I discover that Malachi is one of those rare people capable of being both intensely serious and intensely funny, switching between these modes seamlessly. His speaking voice is that of a natural story teller. And there is also something of the “seen it all, heard it all” country doctor about him. I get the impression there is little one could say to shock this man: that whatever shameful thing you have to reveal, he will just chuckle and nod, as if it is perfectly matter-of-course, in the scheme of things. I imagine all this is a useful toolkit for a journalist, dealing with such a touchy topic as the socio-political climate in Northern Ireland. 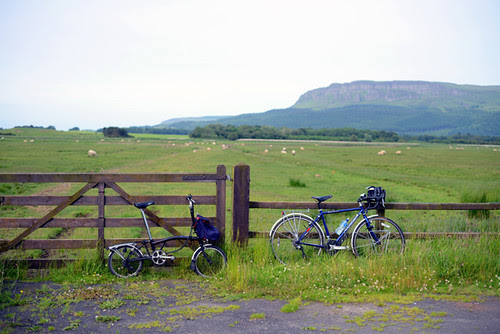 On me Malachi's manner has an immediate disarming effect. I feel at ease, and also like a younger, less jaded version of myself. We talk for several hours, and none of it is bike related. Then we go for a ride, continuing the conversation. Malachi is quite good to ride with. We meander easily as we talk, synchronisng speeds and weaving around each other. At one point a dog leaps out from a farmer's yard and, to my horror, goes for my companion's ankle. This does not seem to phase him in the least. "He's got my trousers!" Malachi remarks with a laugh as he shakes the angry little creature off. Then he continues with his train of thought. It occurs to me that this is how he's learned to deal with life's problems - and, more specifically, with being threatened, as a journalist writing about sensitive topics. 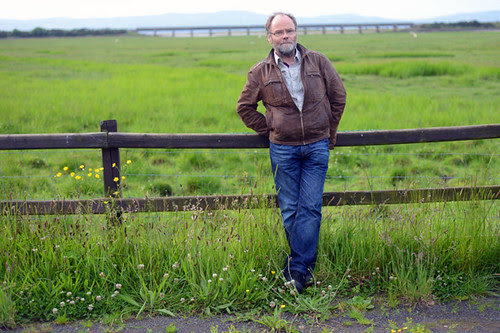 We talk about writing, and how doing it every day becomes addictive, like cycling. You don't feel right if you don't ride. And you don't feel right if you don't write. It almost doesn't matter what and for how long, as long as you write/ ride something that day. In that vein, we also talk about "real" writing versus writing you do because it is easy, or a change of pace, or a tactic to deal with writer's block - filling those gaps when the real stuff does not flow. Lately Malachi has been submitting stories to an erotica magazine (here is one about cycling, if you're curious) that are exactly that. The stories flow easily and he has fun writing them. But he wonders about the relationship between these pieces and his "serious" work. I nod. As I see it, there is nothing wrong with erotica per se - except that it's a closed genre, that once a writer settles into, can be difficult to escape. A bit like vampire stories, or murder mysteries, or ...bicycle blogs for that matter.

Before heading off, Malachi gives the Binevenagh climb a try - curious after reading my description. He tells me it is steeper than the Torr Road near Ballycastle I would not even consider the previous year. I am surprised to hear that, and now I want to give Torr Road a try. Riding, like writing, does grow easier over time.
Labels: bike friends Ireland