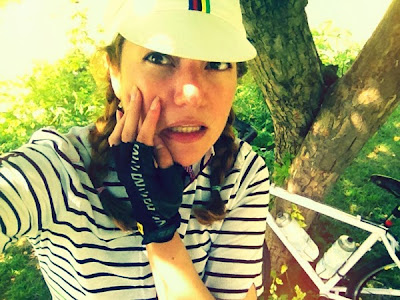 Though I have a surprisingly good track record of not crashing my bike, that does not mean I haven't gotten hurt cycling. And for whatever strange reason, the main cause of that hurt has been bees. That's right, bees.

For the record, until 5 years ago I have never had a problem with the stripey, fuzzy, industrious, winged little creatures. They are handsome. They are useful. And they make delicious sweet honey. But no sooner had I put foot to pedal than our relationship soured.

In Spring 2009 I was cycling along the Danube Bike Path outside Vienna, when a whale of a bumble bee flew directly into my face. When our worlds collided, I was going 12mph on an upright bike and it was going full bumblebee speed. It didn't sting me. It sort of bounced off my eye, just beneath the right brow bone. But the impact had such force, that I walked around with a black eye for a week. This was back when I had a 9-5 job, with an office and Important Meetings and everything. Explaining this incident - in English and German and sometimes other languages too - never failed to delight, especially when I had to resort to pantomime. Pedal-pedal-pedal... bzzz... smack, I would gesture. My audience would positively beam with understanding. Aaaaaah, yes-yes, oop-pa!

I submit to you some statistics. Before I began cycling, I'd only been stung by a bee once, maybe twice in my life. Since I began cycling? At least half a dozen times. In fact the number might be closer to 10. The first time was a shock, the second time an annoyance. After that I began to take it in stride. Still, there are a few memorable stings. Like that beautiful spring day on which I first exposed my ankles, donning 3/4 shorts instead of full length tights, only to be stung in one of said ankles, causing a baseball sized swelling. Or that time I first rode to the Fruitlands with Pamela, and, just before reaching the top of the big climb, was stung in the fold between thigh and crotch. Or the time I was stung on the palm of my hand whilst holding the handlebars and wearing cycling gloves. I admit that continuing to hold the bars for the last 20 miles home caused some whimpering.

And then there was yesterday. Just 4 miles into a 40 mile ride, I am bombing (well, okay - proceeding cautiously) downhill, when smack! A bee flies directly into my sunglasses, bouncing off the lower edge of the right lens, then off my cheekbone, before falling to the ground. At first I don't even bother slowing down. But then I realise that the creature managed to actually sting me whilst performing its death throe acrobatics. The pain is sharp, then piercing, then downright unbearable. Finally I pull over and get off the bike. By this time the right side of my face feels like it's going numb. Of all the symptoms I know associated with bee stings, this one surprises me and I calmly wonder whether Something Bad is Happening. I pull out my phone and send a text message to my husband (who has ER experience and is great for quick unsentimental feedback). I try to be precise: "stung by bee below right eye. side face numb. keep riding or seek med help?"

Unfortunately this happens in a spot with poor cell phone reception and I am not able to send the text. Or search for "bee sting, numbness" on the internet. So I decide to keep riding until I find an establishment with a bathroom where I could clean the sting and get a better look at it. This does not take long, as the area is chock full of ice cream shops and lobster shacks placed every 2/3rd of a mile or so along the coastal roads. Despite the morning hour, the nearest lobster place is already open. They have not only a bathroom but also one of those first aid ice packs that doesn't become an ice pack until you activate it. The waitresses observe with interest, elbows on the sink, as I luxuriate in their cool bathroom, washing the sunscreen and sweat and grime off my face, then applying the ice pack to the now-swollen area.

At length the numbness wears off and now only the pain of the sting remains. I reason this means I'm okay and decide to keep riding. Maybe the pain of the sting and the pain of the cycling (I plan to practice standing again - hoping to beat my 1/2 mile at a time record) would cancel each other out. This proves a good strategy and I proceed to have a lovely ride. Later in the day the swelling and pain subside and by the time I go to bed the incident is nearly forgotten.

Alas this morning I open my eyes and discover I cannot open the right one completely. The area beneath it looks like a misshapen tomato. Apparently this is pretty normal for a bee sting under the eye; it can take up to a week for the swelling to go down. Bees!

But you know how the song goes... "when the bee stings/ my favourite things" and all that? So I went on a squinty early morning bike ride and didn't feel so bad. The Advil probably helped too.
Labels: comfort Honey roadcycling stories