A Look at Kinn: the US-Made Midtail 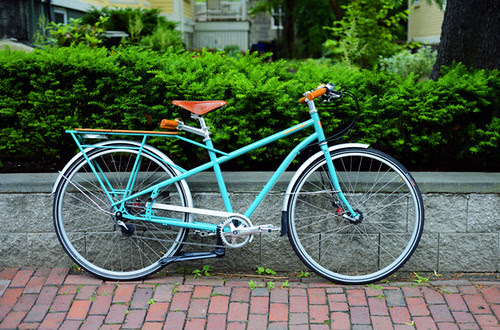 Before setting off abroad earlier this summer, I had a chance to glimpse the much talked about Kinn - a new midtail utility bike manufactured in Portland, Oregon. Today being the 4th of July, it seemed like a good time to share my initial impressions of this US-made machine.

Relatively new to the scene, "midtail" bikes are characterised by an extended rear end that is longer than that of a conventional city bike but shorter than that of a full-on longtail cargo bike. In 2012, Yuba released the Boda Boda midtail (featured here) and Kona introduced its MinUte midtail. At around the same time, following two years of prototyping, Kinn unveiled the Cascade Flyer. 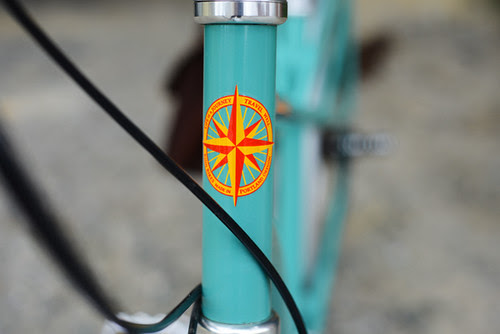 Kinn describes its mission as to be "big enough for family and small enough for you." The company's name is a double reference: to kin, as in family, and to kinetic, as in motion. Designed by founder Alistair Williamson, the frames are manufactured in small batches (around 100 per year) by the Zen Bike Fab. The racks are fabricated at ADX. And the wheels are handbuilt at Sugar Wheelworks. All of these are Portland, OR establishments, so the company keeps it very local indeed. An interesting article on the development and prototyping of Kinn Bikes is worth having a look at here. 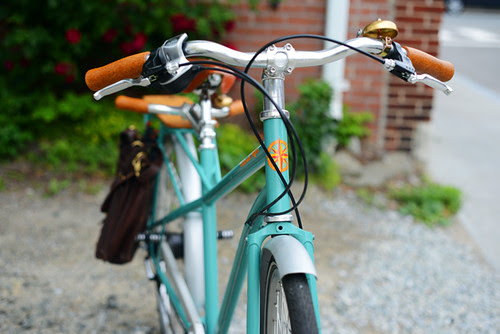 The Kinn's frame and fork are welded chromoly steel, designed around 700C wheels and up to 50mm tires with fenders. The geometry is characterised by 72° head and set tube angles, a low bottom bracket and a high trail front end. The frameset is available in the "robin's egg blue" colour shown and two sizes: The Small/Medium fits riders 5'3" - 5'9" and the Medium/Large fits riders 5'8" - 6'2". The standard component build includes Avid disc brakes, a choice of a 9-speed derailleur (Shimano Alivio) or 8-speed internal hub (Shimano Alfine) gearing, fenders, chainguard, city pedals, kickstand, and Velo Orange Milano handlebars with cork grips. Complete bikes are estimated to weigh 34lbs-38lbs, depending on size and build. Prices start at $1,950 for complete bike with derailleur gearing, and $2,200 with internally geared hub. Detailed specifications can be found here. 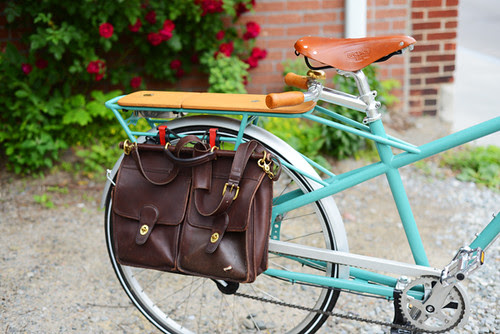 The integrated rear "multi rack" is rated for 130lb carrying capacity. The pannier rails are designed to fit two panniers on each side (or one on each side if the rack is fitted with a child seat). The rack features a long bamboo deck (21” x 5.5”), hidden lockable toolbox, a platform that integrates with the Yepp child seat mount, built in footpeg mounts. The child seat and little passenger bars (shown) are available as extra accessories. 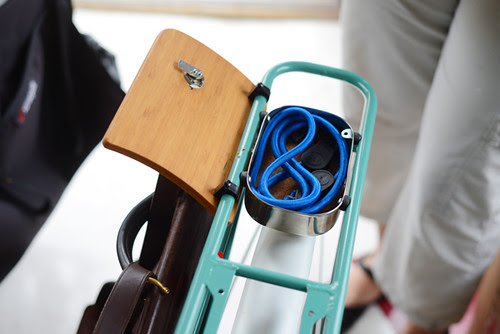 The bamboo platform is modular: The front part swivels out of the way for the child seat mount. The rear part opens to access the lock box. 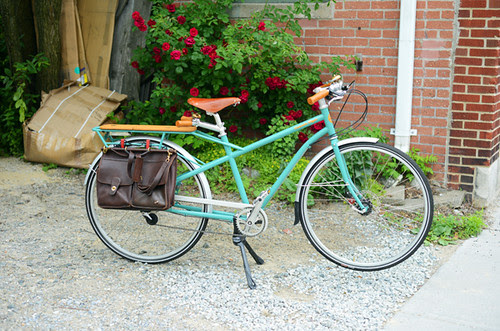 I have only done an introductory test ride on the Kinn so far: Around 4 miles, with a single pannier in the rear. Now, I do realise that Kinn's literature focuses largely on child transport. In fact, when Kinn offered me a test ride, I wondered whether I was the right person for the task. I do not have kids and do not plan to cycle with other people's children on board for the sake of a review. They still wanted me to try the Kinn and see what I think of it as personal transport - so those will be the parameters of my impressions. The bike is also available for other locals to try with their own kids on board (at Bicycle Belle in Cambridge/Somerville, MA), and I will later collect their impressions. 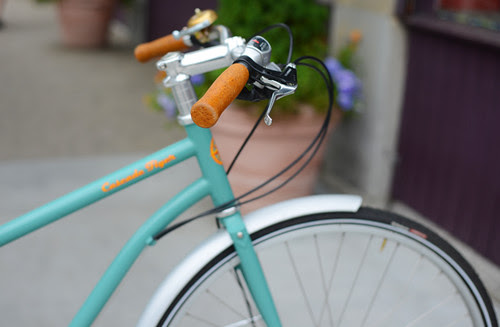 As far as my own first impressions: What I liked most was how the Kinn rides. It is distinctly un-cruiserish and un-cargobikish; a fast, responsive, "sporty" bike. Part of that is the positioning: The handlebars are intentionally set lower than those on bikes like the Xtracycle and Yuba, the stem is long, and the front end geometry is pretty tight (notice the way the downtube curves around the front wheel). I like the low bottom bracket and the quick, yet stable feel of the steering. The Kinn is not meant to be a relaxed city bike, but something a bit more aggressive. The ride quality over bad roads was great as well, even with the 35mm tires the demo bike was fitted with. It was simply a fun bike to ride that did not feel like a cargo bike. 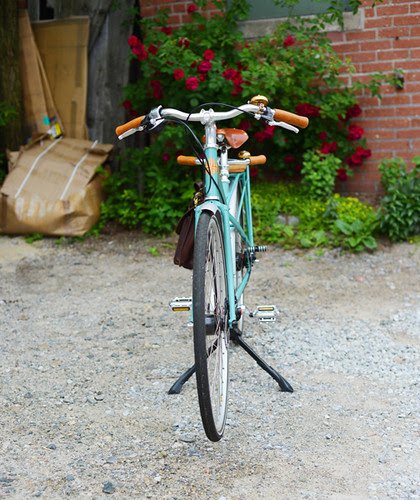 For a transportation bicycle, the Kinn's frame is a little tight for my taste. The sloped top tube is too high for me to step over (it is higher than the Xtracycle Radish, or a typical mixte frame), and my toe rubbed the fender a couple of times on slow tight turns. I would love it if the bike's ride characteristics could be retained while providing a little more toe clearance in the front and a lower standover height. An obvious solution would be to go with a smaller wheel size - though I understand that they went with 700C intentionally, aiming for a roadbike type feel. 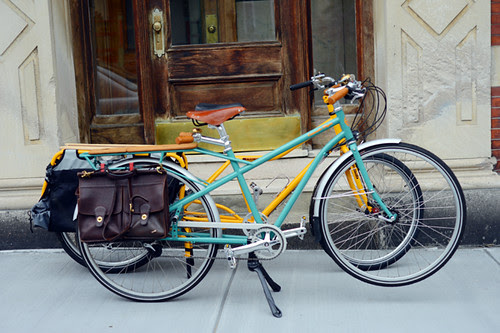 As far as cargo capacity, the Kinn is visibly shorter in the rear than a typical longtail (shown here next to the Xtracycle Radish). It does not come with any sort of dedicated carry system: You strap things directly to the rack as you would with a regular bike. The rear rack is an intricate design, with lots of rails and support stays onto which cargo could theoretically be strapped. One thing I wonder, is how two full-sized panniers can fit on each side of the rack, as claimed, since the one I used took up most of the dedicated pannier railing. I will experiment with this some more.

Walking and parking the Kinn in the city felt entirely like dealing with a regular sized bike. When an extra degree of compactness is desired, the front wheel can be turned all the way around to fold into the frame (like so), making it compatible with bus and car racks. 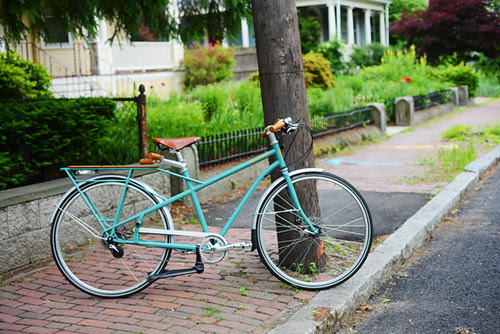 The Kinn Cascade Flyer is an intriguing specimen that I look forward to examining further once I am back stateside. The compact design that still offers more carry capacity than a typical transport bike is of obvious benefit to city dwellers who do not want to lock up a cargo bike outside. The invertable front wheel is a useful feature for those who take their bikes on city buses. And for parents who like a sporty ride, the Kinn's rack is rated to carry a kid up to age 12.

Finally, it is impressive that Kinn has managed to produce this bicycle locally at the current price point. They are soon planning to launch a Kickstarter campaign for Kin 1.1 (the next batch will have a few minor modifications)  to help fund the continued manufacturing of these bike in the US - I will keep you posted.

If you are in the Boston area, this bicycle (including child seat) is available to test ride at my neighbourhood's new bike shop, Bicycle Belle. I will post a detailed review in August.
Labels: bicycle reviews cargo bikes test rides