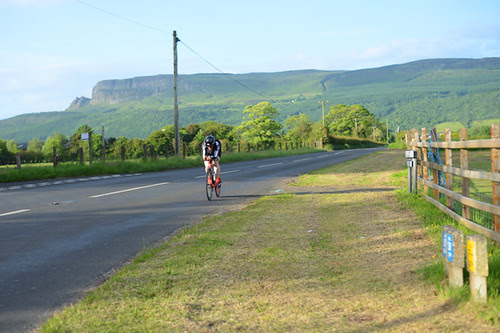 "Mind you, this is only a club time trial," Chris Sharp explains as we set off toward the start on our bikes. But a small club event is exactly what I want to see. The riders in the spirit of competition, but still in their element. The local atmosphere. This is what I think is known as a training race in the US. Staged fairly frequently, it allows riders to test their fitness at different points in the season. 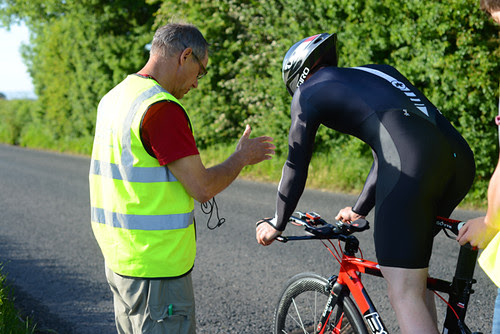 Time trials are a very particular form of racing, and a long standing tradition in the UK and Ireland. In the year 1890 bicycle racing was banned on public roads, permitted only on indoor tracks. This ban brought about a new form of racing, done under the radar of the law. Instead of racing each other outright, cyclists would start at individual intervals and race against the clock. Without drafting or riding in a bunch, there was nothing overtly identifying their activities as a road race. Participants wore no race numbers or club jerseys, adapting instead a style of all-black attire. Races were held in secret, the dates and start times shared through word of mouth. Part secret society, part act of rebellion, the tradition of time trials was born. And although the road racing ban has long since been lifted (I believe in the 1950s), time trials remain popular in the British Isles. 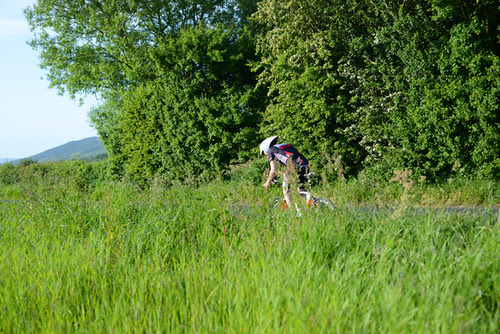 Here in the Roe Valley - a coastal region in the Western part of Northern Ireland - the landscape lends itself to time trials remarkably well. There are long, flat stretches with very little car traffic, where it's possible to pick up some real speed. There are also small, but quite steep mountains for hill climb time trials. Pick whichever you like, or try both. 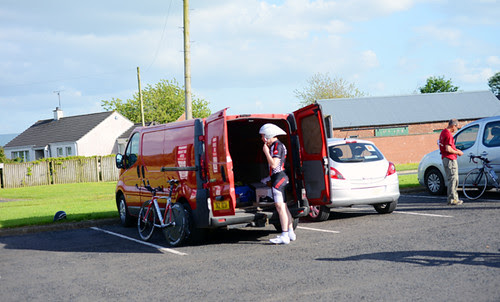 On this particular evening, members of the Roe Valley Cycling Club gather to compete in a 25 mile time trial: Two loops along the scenic coastal roads, twice crossing the beautiful river Roe. We pull into a parking lot outside of Limavady, just as the riders are assembling their bikes and getting prepared.

For those unaccustomed to modern time trial equipment, both the bikes and the riders are a sight to see. Aero bars, aero tubing, aero wheels, aero helmets... 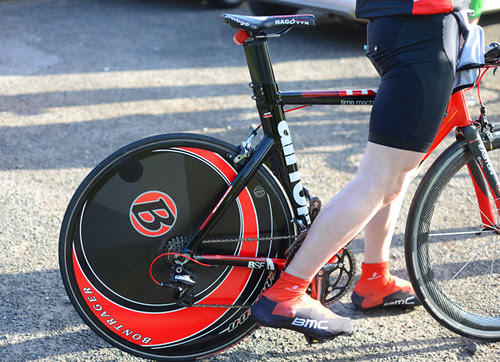 Since drafting is not permitted, much of time trialing is about reducing the individual rider's air resistance. The specialised equipment is designed to facilitate this. The rider's position is quite aggressive, with a steep seat tube and set-forward saddle placing them right over the bottom bracket. In the aero position, they ride with a flat back. 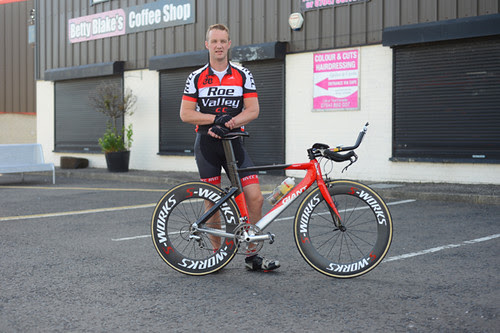 I try not to bother the racers at the start, but they are friendly and relaxed. 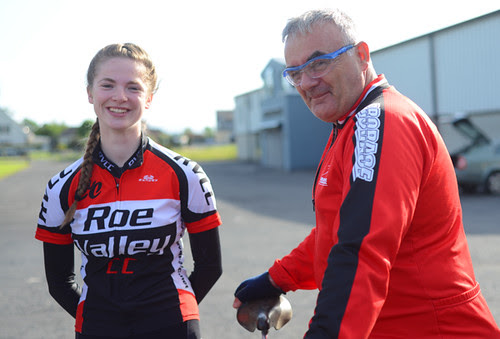 We meet several of them, including Laura Maxwell - Junior Ladies Ulster Hill Climb champion - whom Chris has been coaching for the past 4 years.

Recently turned 17, this is Laura's last year racing as a junior on limited gearing. Having trained for 10 mile time trials so far, the evening's 25 mile course would be a new challenge. She is the only junior and the only female racing today. 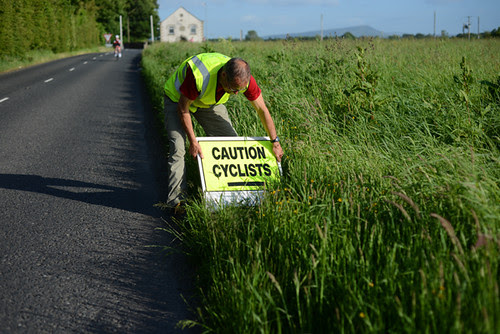 Once the riders' bikes are prepped, all gathered move on from the parking lot to the start of the race - a field along an adjacent road. 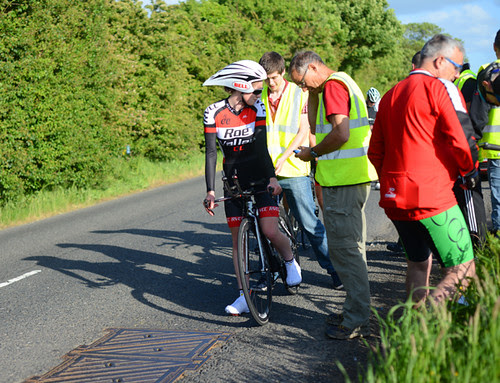 These are race marshals, riders, some family members there as support crews, even a few spectators.

I meet Wallace Donaghy. In the 1950s he raced with the City of Derry Wheelmen, time trial and road. No longer racing himself, he comes to watch the local riders. Today Wallace rides a Raleigh Appalachian - a lugged steel mountain bike circa 1989. He also has a carbon race bike. He examines my titanium frame as we discuss frame materials, waiting for the race to start. 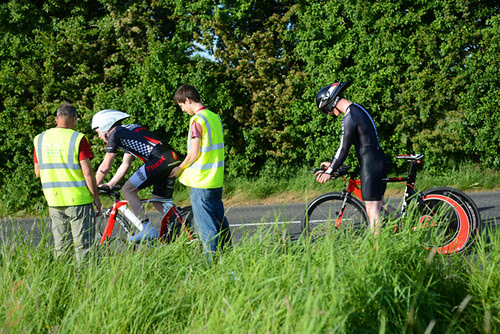 The riders line up for their starts at intervals. Watching this is fascinating. 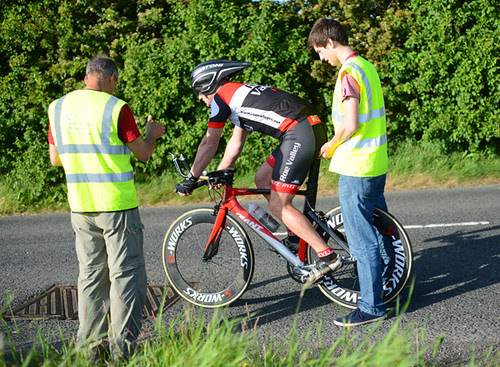 A marshall holds the bike by the saddle as the rider clips in, then continues to hold the bike in place. Another marshall then starts counting back from 15 seconds. 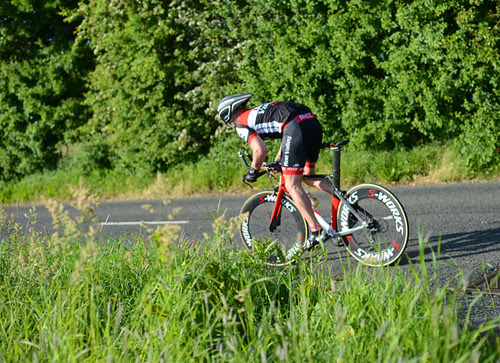 When the sign to go is given, it appears as if the marshall at the back is simply letting go of the saddle and the rider slingshots forward. In fact, it's explained to me, the marshal gives the rider a little push, allowing them to start in a bigger gear that otherwise feasible. 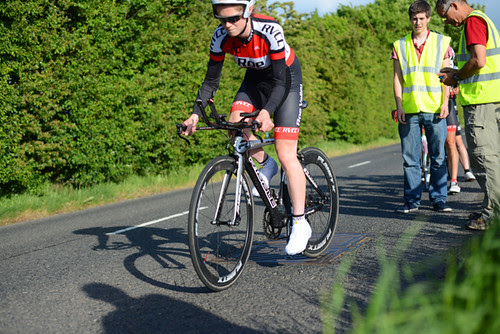 As the rider takes off, they start off holding the wider set of handlebars. These somewhat resemble "bullhorns," and are equipped with inverse brake levers.

Standing on the pedals and rocking the bike back and forth, the rider quickly gets up to speed and switches to the aero position. This is exciting to watch. They take off in a violent sort of dance, before finally turning smooth as liquid as they disappear into the distance. 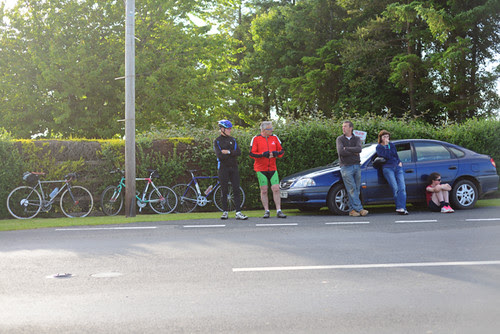 Once all the riders take off, we cycle over to a spot just before the finish line to watch them race at speed. They would be passing us twice, the course consisting of two laps. 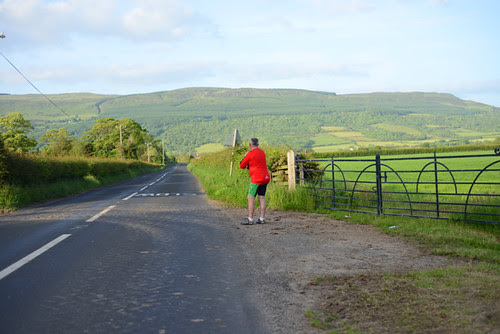 Some time passes before we see them, but finally we spot the first rider in the distance. The support crews and spectators cheer for them, then the next and the next. 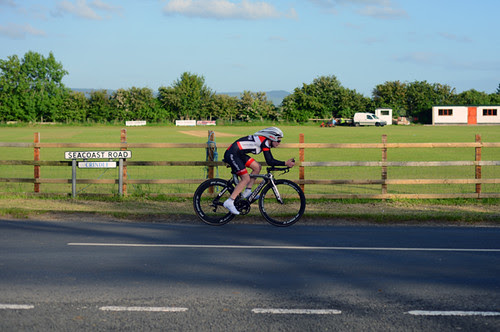 When we spot Laura, the crowd goes wild - her mother, sister and uncle. 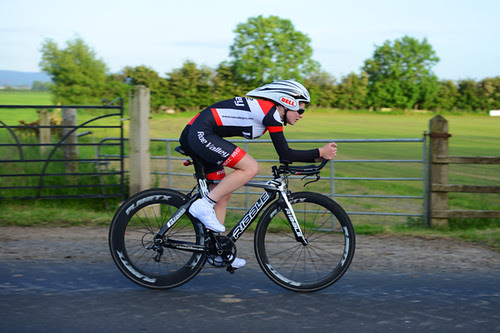 On her second go around the course, I stand closer to get a better look. She is in the zone, head down, eyes forward, a faint smile on her lips as she flies past us. Her posture on the bike is amazing: Her entire body perfectly still, except for the legs going round and round in circles. 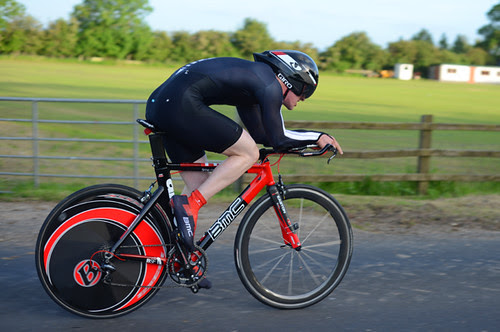 One by one I watch the riders pass. There is an almost coccoon-like stillness around each one, as if each is in their own little world, surrounded by a force field. 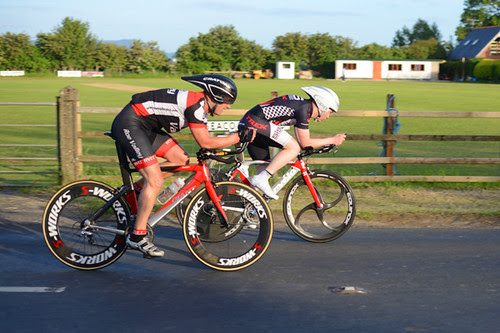 On the final lap, I watch one rider pass another. This can be quite challenging in a time trial: The rider must pass immediately, since they are not allowed to draft. 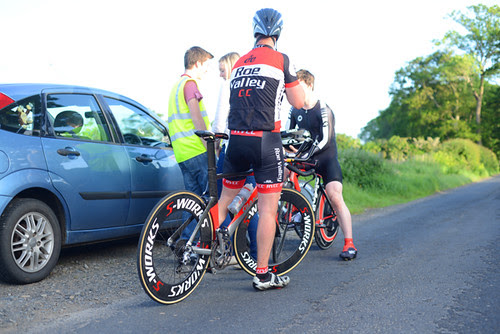 Making our way to the finish, we arrive to the sight of riders cooling down, drinking, chatting with each other about the race. Laura did well, particularly considering the new distance. The numbers don't mean much to me yet, but I am interested nonetheless and listen to the rider's chatter intently. 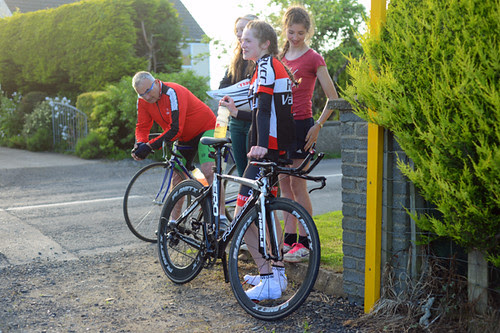 The sun begins to set. This happens slowly here. It will not be dark for hours yet. The riders set off to their homes, in surrounding towns, villages and farms. I put my camera away and get back on my bike. "How did you like that, then?" Chris asks. I shake my head and smile, as we cross the River Roe for the 3rd time that evening. Of all the things I saw, it's the stillness of the riders that is etched in my memory. The absolute stillness against the wind, with only the legs going round in circles.
Labels: bicycle events Ireland races