The Sky is a Happening Place 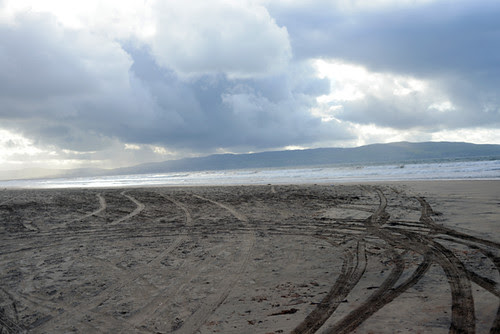 The thing about the weather on the coast of Northern Ireland, is not that it's good, bad, cold or warm, but that it changes rapidly and constantly. "Four seasons in a day," they say here.

But it's more than about changes in temperature and precipitation. The real action is in the sky. There is drama there - a celestial theater that I could stand and watch for hours. The cloud formations, like temperamental actors rushing about the stage, appear to feed off of each other's emotions. Plots thicken. Characters develop. Tempers fly. Action builds up toward crescendos. The end of an act can be explosive, or anti-climactic. Curtains close, then open again for the next act.

Here one cloud approaches another, pressingly, entreatingly. The object of its attention demurs. Like characters in a Chekhov play, they engage in a moody, fateful struggle. Tragically but also coyly, they dance over the peak of the mountain - back and forth, back and forth, until finally they collide - turning into a different creature entirely and swooping down to swallow the mountain whole. A roar of applause.

In my winter clothes I stand on the beach of Castle Rock on a June afternoon and watch all this, my bike propped against the stone wall. There are only two colours: beige and blue. There are only two entities: sky and earth. And in the moment, this seems like all there is, or ever was, or ever will be. It is more than enough.
Labels: Ireland psychology stories