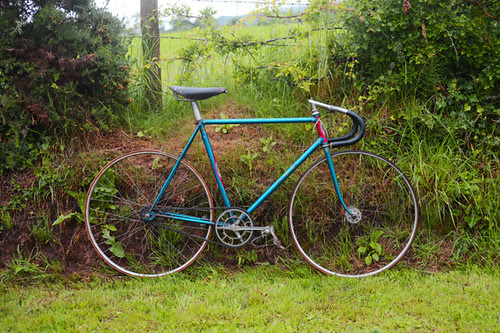 Still active today, Bob Jackson Cycles are a British builder of classic steel bicycles that is well known around the world. Less commonly known is the name JRJ Cycles that preceded it. Bob (John Robert) Jackson began building bicycle frames in Leeds, England, in 1935, offering track and road racing (time trial) models. Part of Chris Sharp's collection, this particular bike is a 1950s grass track racer that once belonged to Leslie White of the Maryland Wheelers near Belfast. The owner raced it into the late 1960s, achieving numerous victories in Northern Ireland. He then hung it up, and the bike remained untouched for over 4 decades. Today it is preserved in as-raced condition. 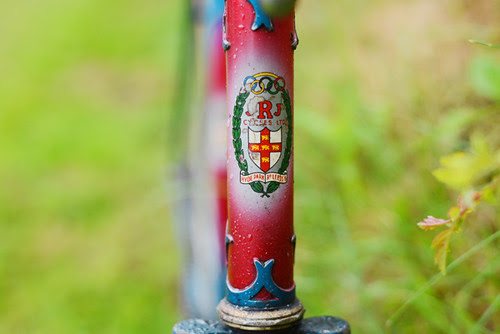 The JRJ name, headbadge and transfers were used exclusively until the 1960s, and still appeared into the 1980s after the switch to "Bob Jackson." 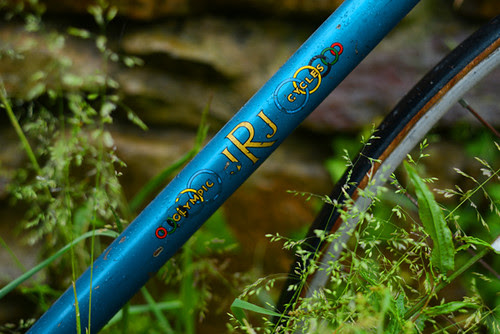 The transfers included renderings of olympic rings, the full name on the downtube reading "JRJ Olympic Cycles." As with other English "lightweight" manufacturers of that time, there was a strong emphasis on performance and competition, which explains the olympic imagery. "Always first at the finish!" was the JRJ Cycles' slogan on advertisements from the 1950s. 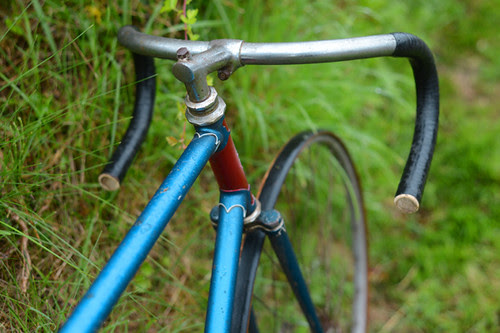 Traditionally, English racing frames from this era tended to be painted in saturated, jewel-like tones, known as a "flamboyant" finish. Not quite the same as pearlescent paint, the flamboyant colours are foil-like, resembling the look of candy wrappers. Bob Jackson had his favourite signature shades, including the red and blue on this bike. The blue leans toward seafoam, and the red is a raspberry-like crimson. 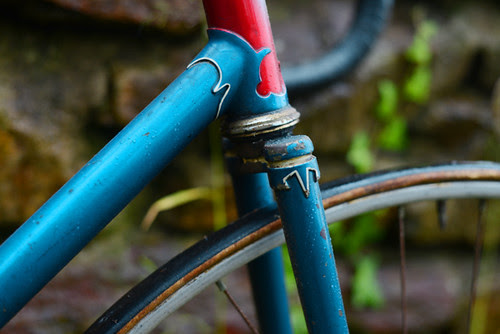 White lining around the lugs and fork crown highlights the elaborate shorelines. 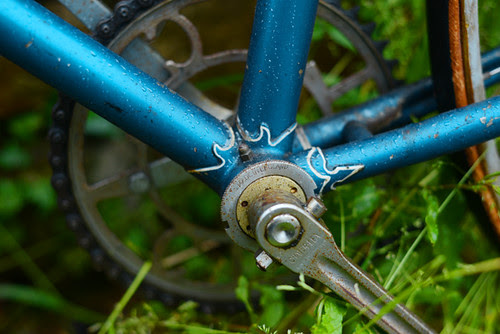 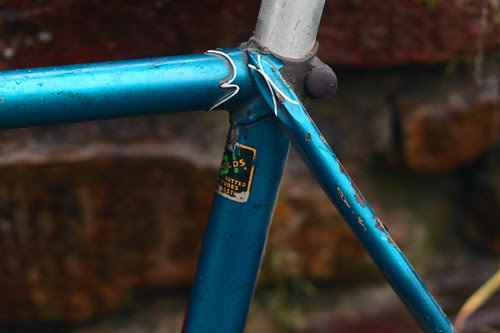 The frame is Reynolds 531 tubing. 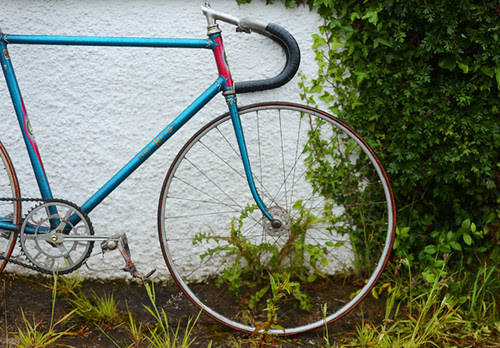 Though it has not been ridden in decades, the large shimmery machine is so marked by care and wear, that it feels alive with the owner's presence and energy. Seeing it leaned against the hedge on a rainy morning, I can't help but imagine the tall, powerful youth Leslie White must have been - his back stretched flat across the 58cm frame, his hands gripping the deep track drops, his legs pushing the monstrous gear in an all-out effort around a grass track. 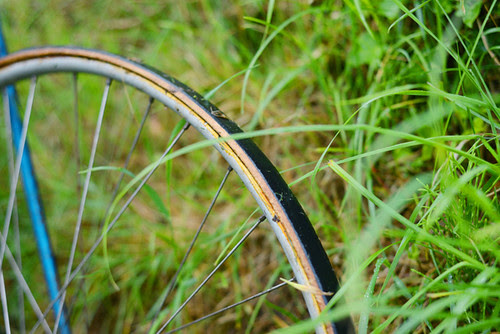 Grass track racing is an interesting tradition in the British Isles. In an earlier post, I mentioned how a ban on road racing from the 1890s through the 1950s led to the invention of time trials. The ban also explains the emphasis on track cycling in the UK and Ireland: Races on enclosed courses were the only kind officially permitted during this time. The grass tracks were similar to velodromes in that they were oval. However, the surface was not banked. Often the track was a multi-use field, temporarily set up for the race. Grass track racing is still done in the UK today, its popularity revived in recent years. At a grass-roots/ community level, a race like this can be organised fairly easily, wherever a flat playing field is available. 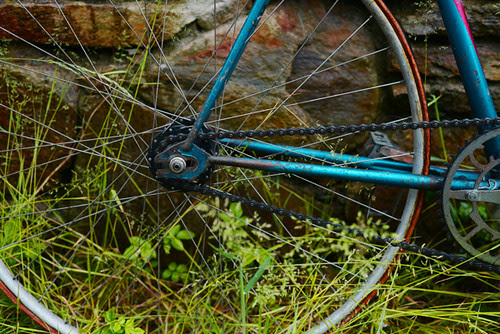 The style of races held was similar to those on the velodrome, and the bikes were fixed gear machines with track style fork-ends. 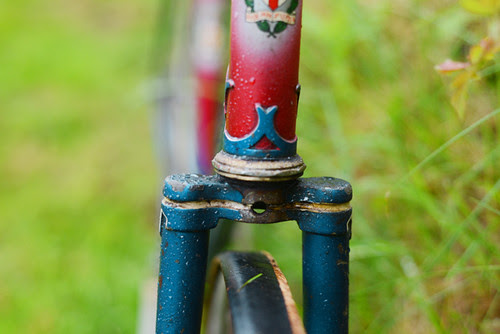 Typically the fork crown was drilled for a front brake: The rider would remove it upon arrival to the race. The tires were of course tubulars - "sew ups." Too deteriorated to hold air, the ones on this bike are original. 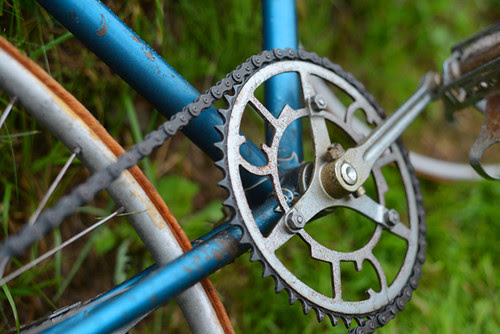 Also original are all the other components. Most notable among these are the English-made Chater Lea crankset and hubs, quite rare now. 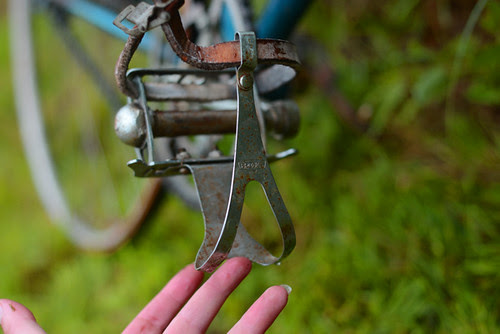 The Chater Lea pedals are fitted with Brooks toe clips and leather straps. 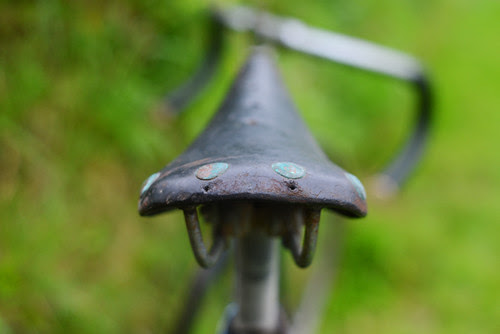 I can make out a faint Brooks stamp on the side of the saddle, but not which model it is. The saddle is long and very narrow - measuring just over 120mm across at the widest part. 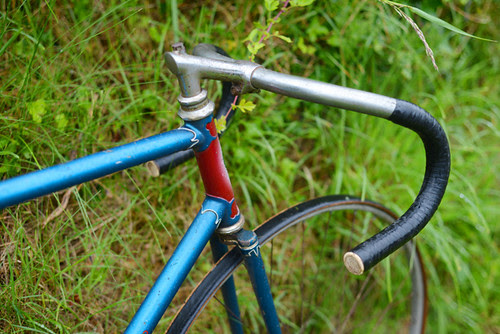 The stem and handlebars are stamped with what looks like Cinelli; I did not want to disturb the patina by cleaning up the inscription. 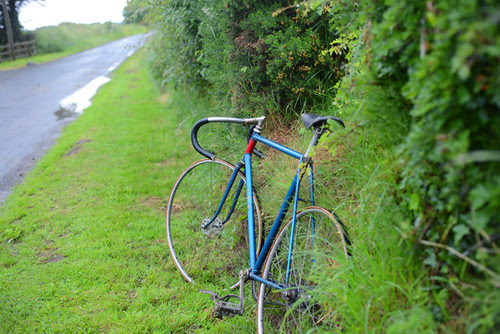 When talking to Chris Sharp about the JRJ, I asked whether he plans to make it ridable. He has many vintage bikes, some of them quite old and storied, and he does not shy away from using them. But Leslie White's grass racer, he wants to preserve the way it is. Having met the bike's original owner, part of it is wanting to honor him. But part of it also is the history. In person, standing near this bike and touching it... There is just something so incredibly alive and exciting about how freshly used everything looks. I can readily imagine it all: a grassy field, a gray sky, a crowd of locals gathered to watch, and the riders - a blur of jewel tones against the overcast country landscape.
Labels: Ireland show and tell vintage vintage