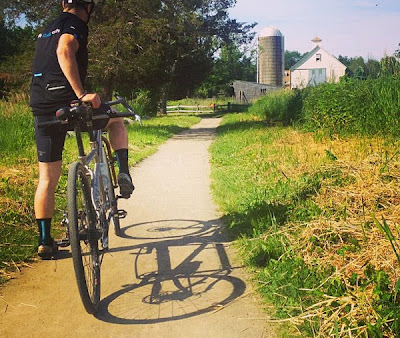 I hoped that I'd get over my tandem fever by now, but instead I have only grown more curious. So when local tandemnist Matt O'Keefe offered to take me on an early morning ride, I was there with bells on. Matt and his wife Susi have been riding tandem for years. They have one for the city and one for sport, both of which Matt - production manager at Seven Cycles, and welder at Merlin prior to that - built himself.

A former mountain bike racer, Matt's attitude to cycling is "the less pavement, the better." When we set off, he suggested we do an unpaved loop instead of going on the road. I had no objections.

I was actually very interested in the logistics of how a tandem would work where we were going. The thing about dirt roads in the Boston suburbs, is that they are more like trails: For the most part not technical, but quite narrow - at times claustrophobically so, with a path through the woods just wide enough to fit a single bike. They can also be twisty. I was curious how a tandem could be wrangled around corners through some of the trickier spots.

But neither the tight turns along the narrow parts of the path nor the sharply zig-zagging boardwalks across bogs were a problem: Matt steered the long machine with precision through gravel, dirt, mud and sand, over ruts and ditches, and around tight corners. Tandems really can go anywhere! The experience from the stoker's seat was fantastic. All I had to do was pedal, and the huge bike did all this cool stuff under Matt's captaining.

In this vein, I keep mulling over the idea that tandems are a great way to expose cyclists to styles of riding they are not yet comfortable with on their own. They could be a tool not only for couples and friends of disparate abilities, but also for cycling clubs and various organised events. For instance, I can imagine a club event where experienced tandem captains offer stoker spots for tours through gorgeous but tricky terrain. Or a tandem race, with stoker positions open to cyclists who would not race on their own. Just a thought, but it could be great fun... Then again, it could turn out like this. Either way, I am in!
Labels: bike friends mountain bike ride reports tandem unpaved