An Oldie but Goody Brompton 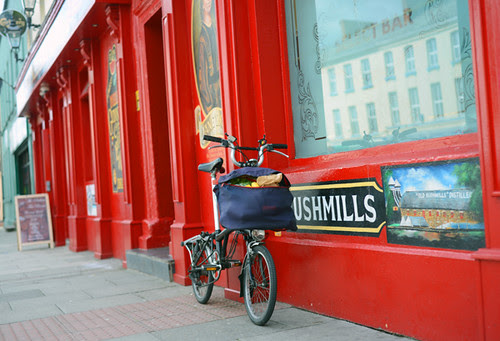 Do older Bromptons qualify as "vintage" bikes? With production dating back to the late 1980s, many would consider them too young for that status. But to me, the vintage vs modern distinction is more about a bike's feel than birth year. Vintage bikes just have that that special something that sets them apart from modern ones - even if the looks are similar. In that vein, I would consider the gem of a bike I am riding in Northern Ireland vintage: A first generation Brompton built in 1993, loaned to me by local collector Chris Sharp. Back home I ride a Brompton as well, so in a way it was a seamless transition. All the more reason the differences are so noticeable. 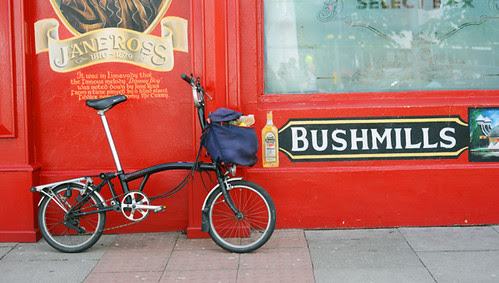 And one major difference is fit. Early Bromptons were a bit less stretched out (shorter "unitube") than the ones in current production. The change was made in 2004, when an extra 20mm were added to the length. For me, this makes the older bike a better fit than my own. Riding it feels like someone has magically shrunk my bike ever so slightly, putting me in a more natural position. 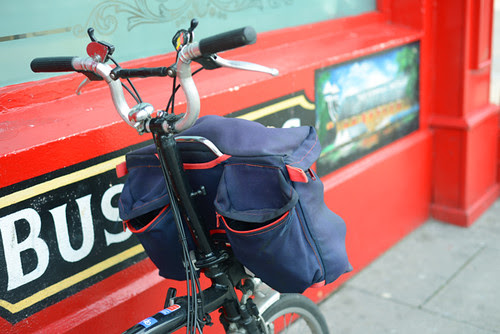 Another difference is the ride quality: The older bike feels "softer." I wonder whether a change to the tubing was made at some point. The wheels or other components could also be responsible for the difference in feel. 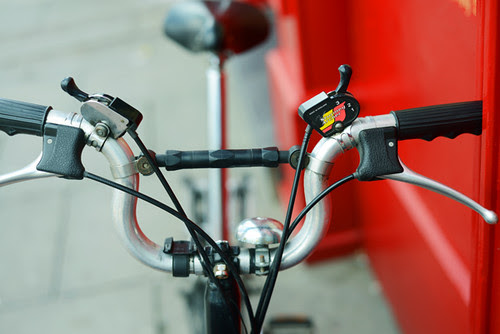 Notice, for instance, the bar across the handlebars. These were added to the early Bromptons as stiffeners: The early production bars were too flexible, known to occasionally warp or break. 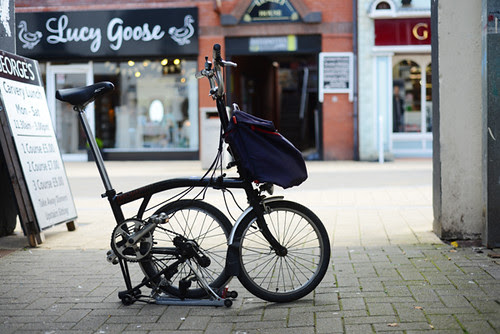 The fold of the older bike is the same, with the exception that the rear triangle does not lock in place when fully unfolded (the rear frame clip was introduced in 2007). This makes it more difficult to pick up and carry or even move the bike in an unfolded state; the rear starts folding under as soon as it lifts off the ground. 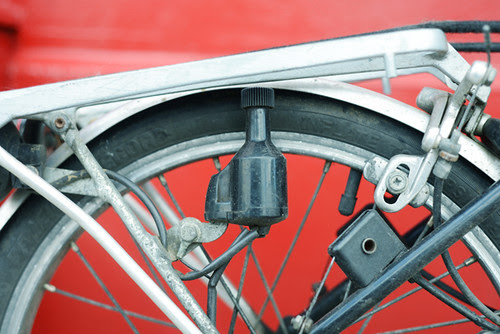 The components are a bit outdated - with bottle generator, not too strong halogen lights, an older drivetrain, and brakes not as grippy as modern ones. But everything functions smoothly and has held up well after two decades of frequent use. 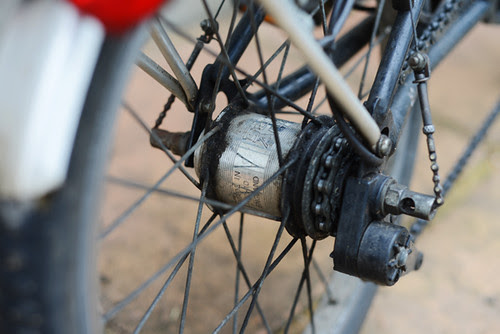 The older drivetrain works excellently and is pretty interesting. The hub is a "Sturmey Archer 5 Star Gear System," controlled via dual shifters. The way this is explained to me, it is actually two hubs in one: a 2-speed, controlled by the left shifter, and a 3-speed, controlled by the right shifter. The resulting gearing is a 5-speed rather than 6, because one gear (neutral) is redundant. 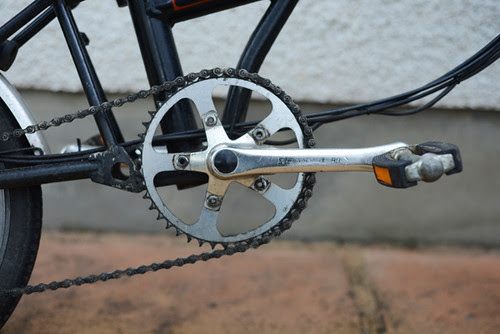 While Brompton did not offer a lowered gearing option in 1993 as it does now, it was possible to achieve this aftermarket by replacing the chainring on the Stronglight crankset, which is what the bike's owner did here. The gear range works nicely on hilly terrain, including on the 10% pitch I encounter on the way home from town. 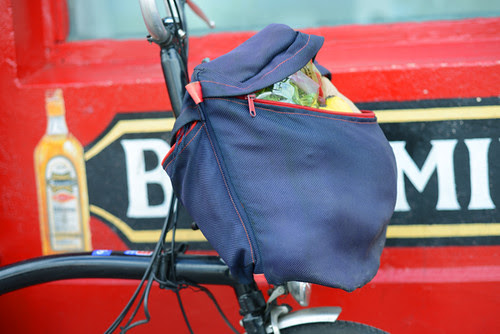 One surprise to me was that this bike came with a front block: I hadn't realised the first generation Bromptons already had them. The block looks identical to the one on my own bike, so it should be compatible with current production bags and baskets. But the bag on this bike is original. 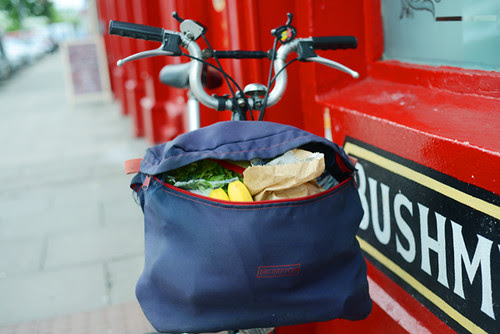 I have never seen mentions or even pictures of the original front bags before, so I thought this might interest Brompton enthusiasts. Made of a thin lightweight canvas, the bag is about the size of a small rucksack. Zipper closure in the front, with two zip-up pockets in the rear. Blue, with red thread and zippers. Small red logo on the front. Not much structure to it, so there has been some sagging and stretching over the years. But aside from the stuck front zipper, the bag is perfectly intact and functional. 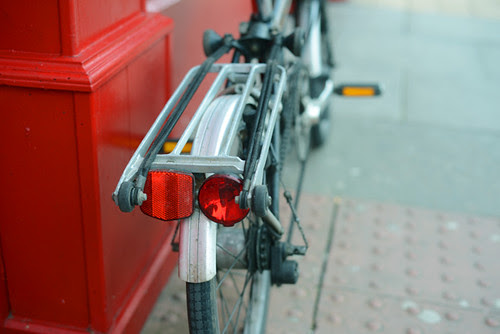 The rear rack is also pretty useful. The integrated bungee cords have remained firm after two decades of use, and hold parcels secure over bumpy roads. I don't have a rear rack on my own bike, but this older one looks the same as the new ones I've seen. 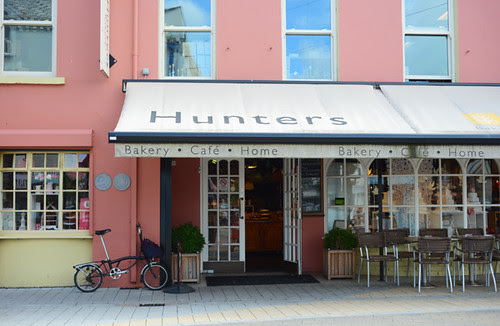 I am staying in a rural area here. When I need to go into town for errands, I get around on the Brompton. It's a 7 mile round trip, with an uphill stretch and a gentle descent in each direction. This bike has been the perfect little vehicle so far: swift, compact and comfortable, with plenty of carry capacity. The handling is pretty much identical to my own Brompton at home, as is the easy ability to throw stuff in the front bag. It's neat how little the basic design of the Brompton has changed over the years. Any tweaks along the way have mostly been been improvements, such as component upgrades and stronger hinges. But I must admit, I will miss the way this older Brompton fits me, as well as its "vintagey" ride quality.

Any owners of early Bromptons out there? Curious what you think of them compared to the newer versions.