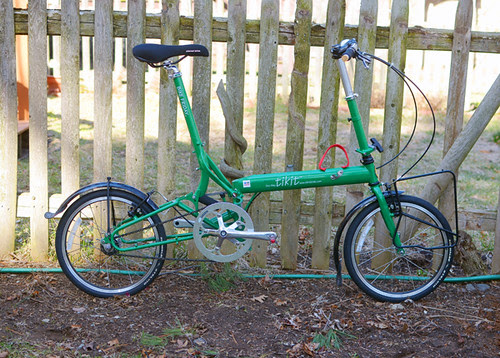 For some time now I've been curious to try a Bike Friday folding bike. They are pretty unusual around these parts, so an opportunity never presented itself. Imagine my delight upon discovering that someone I knew owned one. Hidden deep in her bike cave, this single speed Tikit stood mostly unridden since the owner, Pamela, stopped commuting to a downtown office. But hearing of my interest she dusted off the machine, and soon I was over to examine the rare specimen. 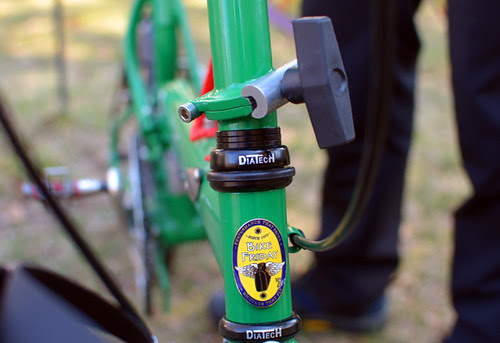 Made by the family-owned Green Gear Cycling in Eugene, Oregon, Bike Friday folding bikes have been handbuilt in the USA since the early 1990s. The range of models includes road, touring, mountain, commuter and tandem folding bikes - and all are highly customisable. Most of the models are designed around 20" wheels, with the fold optimised for packing the bike into a suitcase. However, the Tikit commuter models are made more compact with 16" wheels, and are designed to fold quickly for multi-modal transportation. 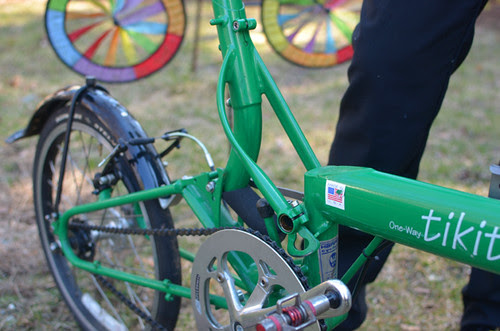 Welded in steel, frame and fork, there are 9 Tikit models in all, offering different drivetrain and handlebar setup options. The One Way Tikit is the single speed/ fixed gear version. 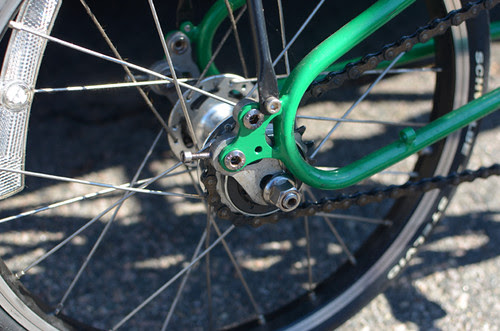 It is set up with a flip-flop hub, 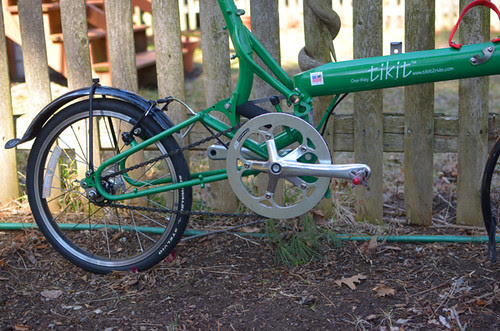 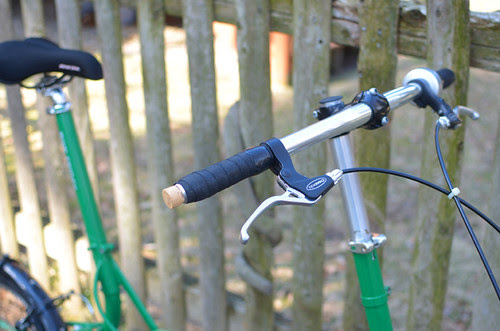 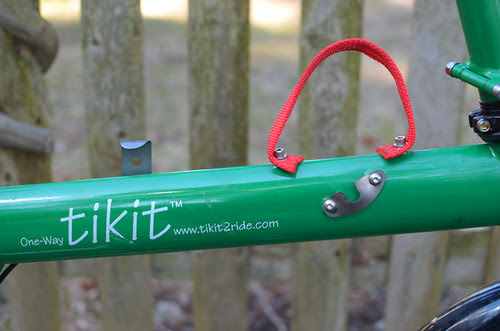 a handy carry handle (could be a bottle cage here instead), 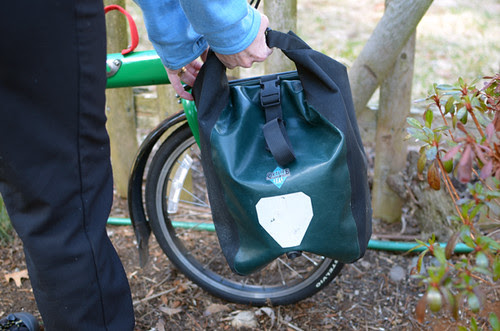 and a low-rider style front rack. 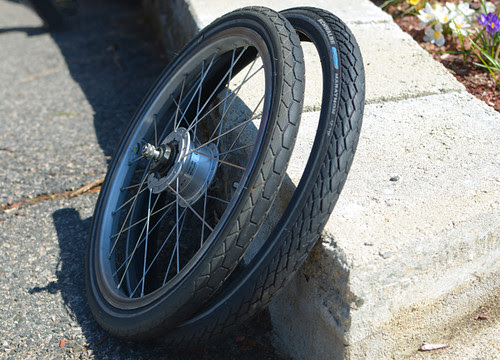 Being a fan of generator lighting, Pamela had set up the bike with a dynamo hub wheel (unattached here, as it had recently been loaned out). 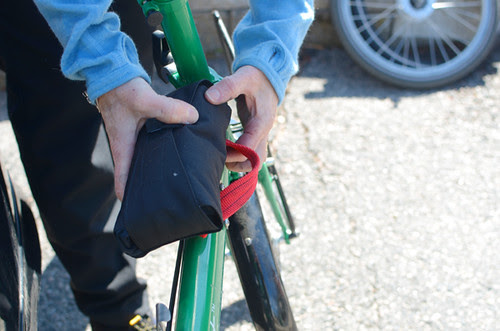 A bike bag also comes with the Tikit, which can be stowed away into a tiny packet when not in use. 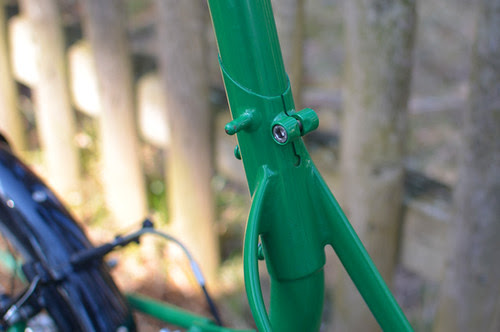 Unlike most other folding bikes, Bike Fridays are available in different sizes. I am unsure what size this Tikit translates to, but its virtual top tube measures an inch or so shorter than the Brompton's (which is approximately 59cm). The seat tube is quite tall, with the saddle barely low enough to accommodate myself and the bike's owner (we are both just over 5'6"). However, as I understand it, the seat tube is modular and can be cut down or replaced with a shorter one. 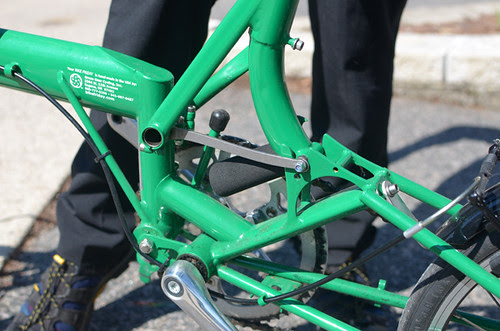 Bike Friday Tikits have had a couple of modifications over the past few years. The area over the bottom bracket is now made stiffer, with older models retrofitted with a stiffener bar. They have also recently made a beefier stem for the Tiket, the older one having been recalled (the bike pictured here has the new stem). 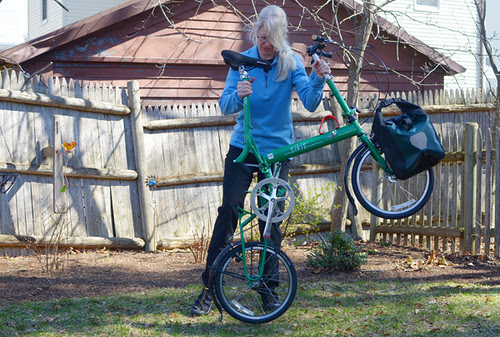 The fold is fairly quick, "less than 9-12 seconds after loosening one twist-locking fastener," according to Bike Friday. 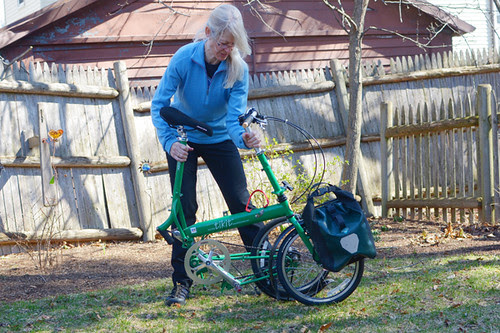 It is Bromptonesque in sequence, except for the seat tube - which gets folded over, rather than slid down. 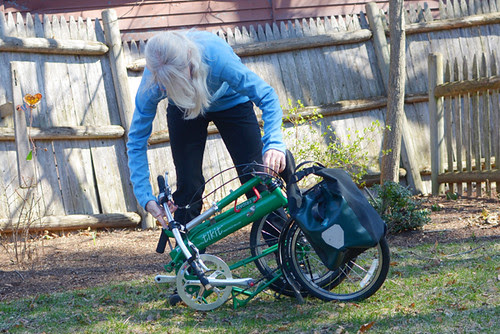 Notably, the front pannier can be kept on the low-rider rack as the bike is being folded. 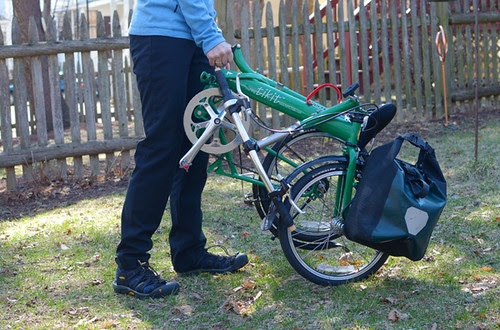 The folded bike can be rolled along, using the wheels themselves, with the bag still attached. 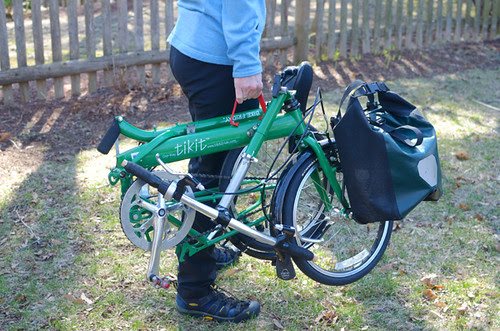 It can also be carried by the handle - though Pamela notes that carrying the bike gets heavy and uncomfortable quickly, particularly when stairs are involved. Picking up the single speed Tikit, it did feel slightly heavier than an all-steel Brompton similarly equipped. And the fold is not as compact. However, the carry handle is quite comfortable compared to how a Brompton must be carried, and being able to roll the Bike Friday by its actual wheels (rather than by the tiny roller-wheels on the Brompton) is a big help. 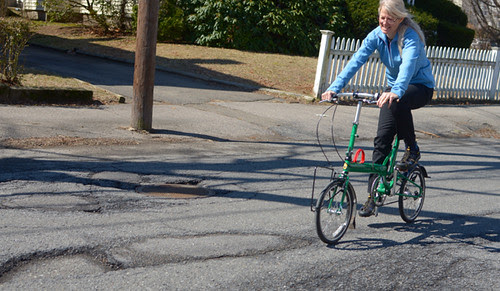 With its hub flipped to freewheel mode, I rode the Tikit around Pamela's neighbourhood. My first impression was that the front-end handling was not dissimilar from my Brompton's. In fact, I would describe the Friday as feeling like a "less extreme" version of the Brompton in that sense. As a result of this similarity, I immediately felt familiar and comfortable with the bike. While the Tikit is Bike Friday's commuter model, with less focus on performance than the others, I certainly found it lively enough - a fun, quick, maneuverable ride. This makes me want to try a smaller size - I bet it would be even more responsive for someone of my stature. With the 16" wheels, there would be no danger of toe overlap no matter what frame size I chose.

On pothole ridden streets, the Tikit's ride quality felt a bit harsh. Riding over torn-up pavement I felt vibrations in my hands and jolts throughout (an impression the bike's owner agrees with). However, on decently maintained roads the ride quality was smooth and pleasant. As an aside here, where we live the roads are particularly poorly maintained; just have a close look at the picture above to see what I mean - the entire street is like that. One could certainly argue that these are not "normal" commuter conditions. 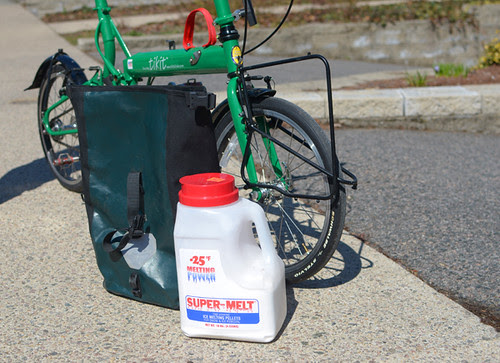 After my initial spin on the Tikit, I then rode it again - this time loaded with some weight. We attached a pannier to the low-rider rack, in which Pamela placed a 10lb bottle of antifreeze. This is about the maximum weight she would typically carry on this bike, she said. The Tikit's low-rider will accommodate most standard panniers, including the one shown from Ortlieb. On a small wheel bike, it is actually not a "low" rider, since it sits above the wheel. This is also how it manages to lift the pannier high enough to keep from dragging along the ground. Little notches along the rack's tubing prevent the pannier from sliding, so it sits securely. The rack is one-sided (right side only), and rolling the bike along I could feel the weight of the pannier pulling to the side. However, once in motion no such thing was discernible. The Tikit handled great with the unilateral front load - I could not feel it at all. This system does limit how much weight one can carry on the bike, but it is handy enough for commuting. I believe that a rear rack is also available for this model.

While I would not switch from my Brompton, I liked the Bike Friday Tikit and would feel comfortable riding it for transportation. A particularly big advantage, as I see it, is the variety in sizes and customisation options. Being able to roll the bike by its wheels is handy as well. And being able to use a standard pannier, as opposed to having to buy a proprietary front bag, could be another plus for those with multiple bikes. Careful tire, saddle and grip selection could compensate for the rough-road harshness I experienced. 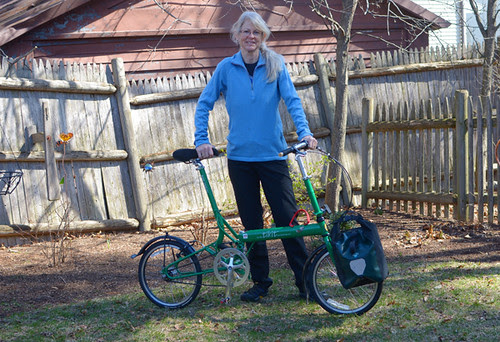 When I was over to test ride this bicycle, the owner surprised me by announcing that she plans to give it away. That's right: Pamela Blalock's personal Bike Friday One Way Tikit pictured here could be yours - complete with flip-flop freewheel/fixed gear hub, fenders, front rack, spare generator hub wheel and a spare set of tires (pannier not included). For details of the give-away, please visit The Blayleys blog!

And if you are in the market for a folding bike, visit the Bike Friday website and prepare to be dazzled with their myriad of stock and custom options. The history of the company is pretty interesting as well. Folding bikes of all types made in Oregon, USA, with prices starting at $1,400 and around a month lead time. Pretty neat!
Labels: bicycle reviews Bike Friday give-away Pamela small wheels test rides