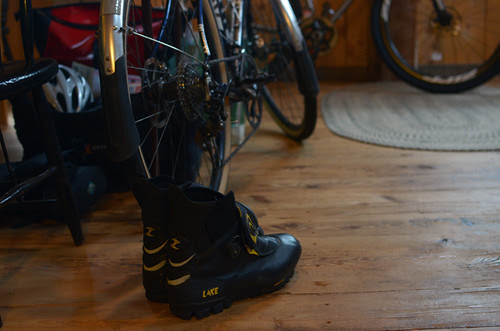 One of these does not belong...

That thought runs through my mind as I look at the others, scattered around the rustic living room, drinking wine and beer by the dim cabin light. Outside it is pitch black, and alarmingly noisy - the sound of heavy rain hitting the metal roof. The forecast says it will be the same over the next three days: The storm is circling in place, "tornado-like." No one talks about this out loud.

DROVES stands for Dirt Roads Of Vermont Epic Sojourn - an event hosted by the Blayleys, now in its fourth year. They rent a cabin near Burke, VT and invite friends for 3 days of riding beautiful, steep dirt roads. For some DROVES is a training camp before the string of summer's competitive events. For others it is a mini-vacation. As for me, I had no expectations. I could use a weekend away, that's all. When I asked Pamela if she thought I could handle the routes, I got the honest answer "I don't know" - followed up with "...but you're welcome to find out!" So I tagged along, bringing the bike "with the lowest gears" per Pamela's emphatic advice.

As the weekend approached, it became obvious that the forecast was dire. Not just a regular sort of dire, but exceptionally, obscenely, laughably dire: temperatures in the 40s and heavy rain for the entire weekend. Following the weather with morbid curiosity, I packed my winter gear.

Earlier in the afternoon...

I wait for John and Pamela on the curb outside my house. Bags in one hand, front fender in the other, bike propped up against the fence. It is a humid 70° in Somerville, the kind that makes it feel like 90°. Sweat trickles down my forehead. Finally the black Honda Fit approaches. Like a 4-year old, I jump up and down with anticipation as it rolls down the street, almost in slow motion, a tandem perched upon its roof majestically, along with a cluster of other bikes in various states of assembly. The neighbours line up to watch. Whatever is happening here, it looks important. By the time my bike is hoisted onto the roof rack, we are all drenched in sweat.

An hour into the drive, we stop for fuel and feel a drastic temperature drop. Half hour later, the skies opened up. We continue north, under increasingly heavy rain and a blanket of black clouds. Pamela drives. John entertains us with stories of cycling in Ireland and his early custom bikes. Studiously we ignore the topic of weather. In the distance I begin to see hints of mountains, shrouded in thick fog. The view looks like lumpy pea soup.

We turn onto the private dirt road not long after 7pm, but it might as well be midnight. I can vaguely see the outlines of a cabin, a tractor, and a pile of logs in a field. Everything else fades to black. Running from the car to the front porch, my teeth chatter. It is freezing. There is non-stop thunder.

But inside is a different world...

As I crack open the door, I am overwhelmed by the burst of orange - the interior is all wooden planks and beams, aglow from the light of many small lamps. An electric heater is blasting. There are couches and quilts and a heavy large table and a cozy kitchenette. A winding staircase leads upstairs.

A tall man rises from the couch, who I learn is Ted. He reminds me of someone, but not, as the other ladies start to tell him, of "that actor from The English Patient." Ted is quiet, but with a heavy, deliberate presence to him, like one of those salt of the earth male Twin Peaks characters. Within moments he and John Bayley remove all the bikes from the car roof and bring them indoors in one fell swoop. Then they shake hands and open some beers.

By the kitchen counter, two exquisitely fit women - Christine and Dominique - are opening a bottle of wine. "Ah Pamela!" they exclaim, with that charming Quebec intonation that stresses the last syllable in every sentence. Later they ask where I'm from. I am the new kid here, the object of curiosity, and a little out of my element. But at that point we have all had a drink and the story of my origins makes more sense than usually. Mo Bruno-Roy relates to my mess of an accent. She herself can sound Canadian prairie one minute, Nawth Shoah the next. She demonstrates back and forth for our amusement.

David Wilcox is keeping busy in the background. Minutes later he produces a tray of steamed potatoes and asparagus from the oven. The room is warm, garlicky. More wine is opened. No one talks about bikes, or the weather.

The bikes are everywhere though; everyone seems to have brought at least one. Soon Jake and Emily arrive and bring more. My bike is propped against the side of the staircase. I park myself on the rug beside it to re-attach the front fender. "Look, she is eager to ride!" someone teases me.

The evening is warm and familiar and endless. With a cup of tea, I sit across the couch from the Canadian hill climbers. Dominique is a brunette with a serene facial expression. Christine is blond and animated. They are about the same height. There is a ying-yang symmetry to them that is mesmerising. "Why do you climb Mt. Washington?" I ask, innocent that I am. Taking turns, they recount the history of them doing the race, which includes the story of how they met Pamela. But they don't say what compels them to do it.

This is the most relaxed evening I've had in ages...

Just when it seems to be nearing bed time, Matt Roy arrives, dripping wet. He is carrying boxes of components, a bag of tools and a work stand. The RSC Endurance Team has recently snagged a sponsorship deal (Seven Cycles, SRAM, Rapha, Zipp and Clement), which would equip the three riders with bikes for long distance mixed terrain racing. John Bayley's frame had just been welded earlier in the day. They'd dragged it up to Vermont and now planned to build it up.

At around 10pm, they set up the stand in the kitchen. I make endless cups of tea and look on with fascination. An eccentric bottom bracket. Road levers for hydraulic disc brakes. 700X40mm tires. Everyone gathers to watch and ask questions, drunk on the exoticism of the strange machine.

The rain beats against the metal roof like a chorus of tribal drums. I resist imagining the condition of the dirt roads. But then no one seems intent on forcing me to ride. Not only that, but by the group's demeanor it isn't clear whether they plan to ride themselves. Perhaps there is an unspoken agreement to write the weekend off and spend it indoors - drinking, catching up with friends and building bikes? It does not feel right to ask.

Finally I see Pamela at the far end of the room, producing her laptop and GPS unit. I walk over, and, feeling as if I'm vocalising the unspeakable, ask whether she plans to ride tomorrow. She says "Let's play it by ear and see how it goes?" - a stunning pronouncement coming from her. She shows me the updated forecast, which now threatens temperatures in the 30s, floods, and - my eyes can hardly believe it - chances of snow.

The original plan had been to set off at 8am and ride either a 90 mile or a 60 mile loop. The new plan is to sleep in and see what the road conditions are, come mid-morning. Walking upstairs, I can hear the clinks of wine glasses below, complemented by rolls of thunder and the sound of rain outside.
Labels: bike friends DROVES Pamela ride reports stories