In conclusion to a rather unusual, entertaining and exhausting weekend, yesterday afternoon I rode on the back of a tandem - with endurance cyclist and racer John Bayley, or, as he is known in his native tongue, Fear Rothar (I'll let you figure that one out).

This was a moment I'd dreamt of for some time! Four years ago my husband and I rented an upright tandem on Cape Cod and rode it back and forth along the bike path. At the time, it had only been months since I'd started riding a bike of any kind, and neither of us had tried a tandem before. But despite initial fumblings, it was great fun. The more time passed, the more fondly I remembered it and the more I wanted to try it again - especially once I got into road cycling. With a fast and competent captain, I reasoned, I could experience a ride beyond the limit of my own meager handling skills and speed. So when John offered me to hop on the back of the tandem, I didn't need to be asked twice. 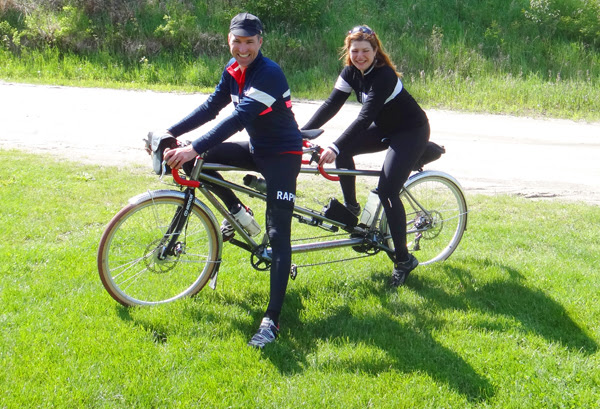 Overall, the process was far more intuitive and natural than I'd anticipated. For those unfamiliar with tandems, the person in front is called the captain, and the person in the rear the stoker. The captain steers, while the stoker goes with the flow and contributes pedaling power. The stoker's pedaling strokes are "fixed" to the captain's, which means that the captain controls the cadence, the gear changes, as well as when to pedal vs when to coast. Starting out, John mounted the bike by swinging his leg over the front and stood over the top tube holding the bike upright. I then swung my leg over the rear, and clipped my right foot in, bringing the pedals to where he wanted them to be. Then John clipped his right foot in. Then he pushed off and we both clipped in the left foot simultaneously. All of this happened fairly quickly and required minimal verbal communication. Subsequent stops and starts were even easier, because John prefers the stoker to remain on the bike with both feet clipped in. This made things pretty simple for me: At stops all I had to do was essentially act as luggage.

An important part of what made all of this work, I think, is that I had full confidence in the captain's ability to keep the bike upright. John is an extremely skilled cyclist who has been captaining tandems for 20 years. I also know him to be a responsible and considerate person. Secure in this, there was trust on my end from the get-go. We clipped in and off we went, with no tentativeness or false starts. 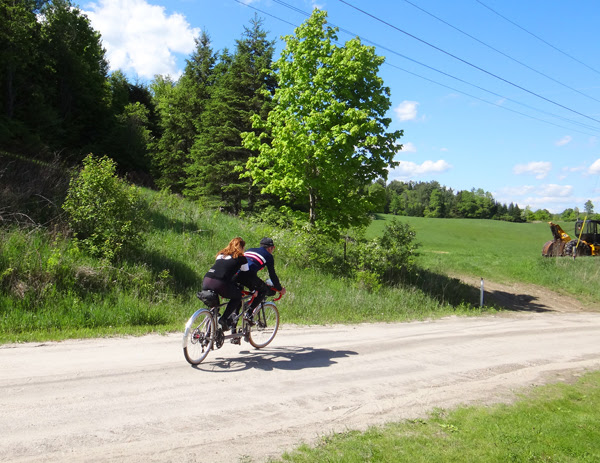 Now, all of this was happening in mountainous northern Vermont, where a group of us was staying over the weekend. There were no flat stretches where we were situated, only long ups and downs with steep grades and lots of dirt. We started off going downhill along a sweeping dirt road, before turning left onto the main road, which led us up a winding climb for a few miles. Once at the top, John did a nimble u-turn and we bombed down the same winding hill.

The experience of being on the back of the bike was wonderful. I was just in heaven for the entire ride. I enjoyed feeling the bike steered by another rider and accommodating to it. I imagine this is a "love it" or "hate it" sort of thing, as it does require the stoker to give up control and to trust the captain's handling. In my case, this was not a problem. Just as I'd hoped, I was able to experience things that I could not have done on my own: more extreme leans, faster speed, expert maneuverability. It was all tremendously exciting. I was only scared once, and that was when we first started descending. It was faster than my concept of "bike speed" had previously entailed and I felt lightheaded. But once I got used to it (and there was plenty of time for that, as it was a long hill!) I began to enjoy it. 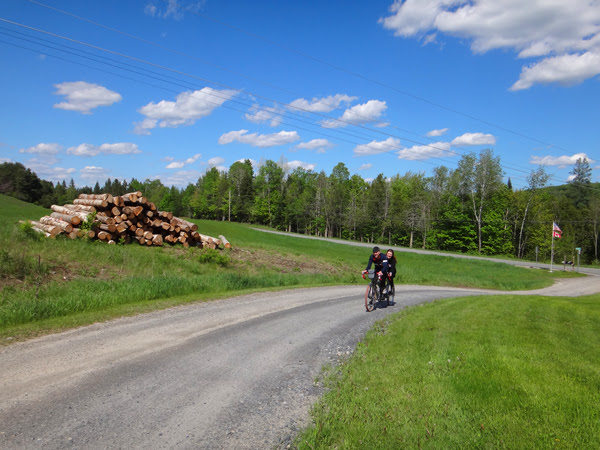 Though not as thrilling as downhill, going uphill on the tandem was pretty nice. John is extremely strong and was spinning the cranks in a higher gear than I could have managed on my own. I contributed as much as I could, amazed at the sensation of spinning instead of grinding, at that grade, in that gear.

As the stoker, there is always the question of how much you're contributing as opposed to taking it easy and soft-pedaling while the captain puts in the real effort. My impression is that I was contributing when I felt myself pushing against a distinct resistance in the cranks. This is a different feeling from the resistance I feel when riding a single bike, but nonetheless there is feedback.

I found the switch from coasting to pedaling and vice-versa to be surprisingly intuitive and did not feel a need for the captain to warn me when switching; my feet would just immediately adapt. Same with switching gears. Surprisingly, I was somehow almost able to anticipate when John was about to coast, or start pedaling again, or switch gears. And the entire time, his cadence felt suspiciously perfect. I am not sure whether he was regulating his cadence to accommodate what he thought I'd be comfortable with, or whether this was his natural rhythm - but we were spinning at a decent rate the entire time, which felt great. 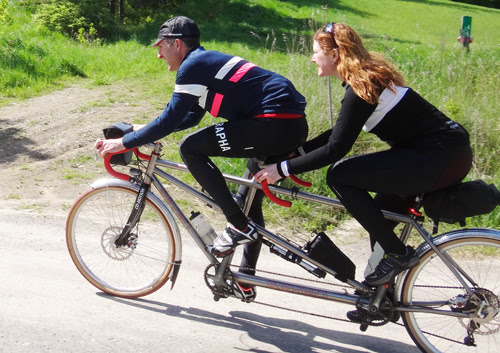 I know fairly little about the world of tandems, but one thing I've noticed is the difference in space allocated to the stoker. In some pictures of tandemists you see the stoker's face practically digging into the captain's back, whereas in others you see them set far apart. John and Pamela's tandem is somewhere in between. Had I wanted to, I could have leaned down to reach John's lower back with my chin when in the drops.  But it wasn't so tight as to feel claustrophobic or uncomfortable. I have seen tandems where the stoker is basically "spooning" the captain.

Since this is the only road tandem I've been on, it would not make sense to attempt a review of any kind, but the ride quality felt pretty good on the 650Bx42mm tires, and in particular I noticed that I felt less "bouncing" than I do on single bikes. While I had no control over braking power, the discs worked very well in John's hands. 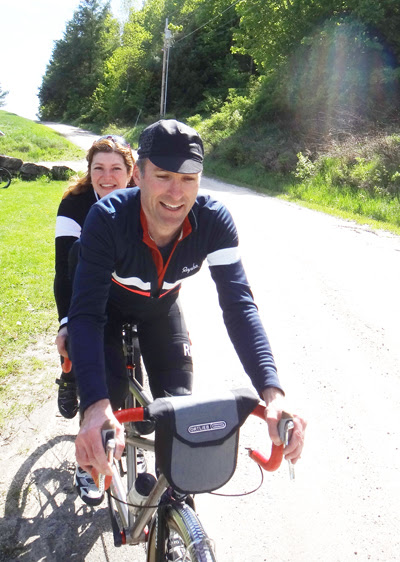 We did not do anything extreme on this ride, figuring a relatively tame spin over hilly roads was enough for my first stoker experience. But John did wow me with his tandem track-standing skills at stops, as well as with his ability to maneuver the long bike through tight spaces. The way I remember it, we actually started on the front porch, at which point John steered the bike down the steps, onto the lawn, in between some parked cars, around the picnic table and over the stone fence - as I hung on for dear life and his lovely spouse snapped pictures. "You can have him for free this once," she said, "but next time I'm charging a rental fee." Fair enough!

Based on others' feedback, it is clear that stoking a tandem is not for everyone. Some riders cannot stand the loss of control (I don't mind, assuming I trust the person in front). Others complain about the limited view (I found that turning my face a bit solved that problem). Finally, there are riders who just cannot get in sync enough to make a tandem ride work. I found riding with John enormously fun and would love to ride again with such a fantastic captain.

Interested in tandem advice from experienced couples? Here is a detailed guide from the Blayleys and a "411" from Chasing Mailboxes.
Labels: bike friends Pamela ride reports Seven tandem