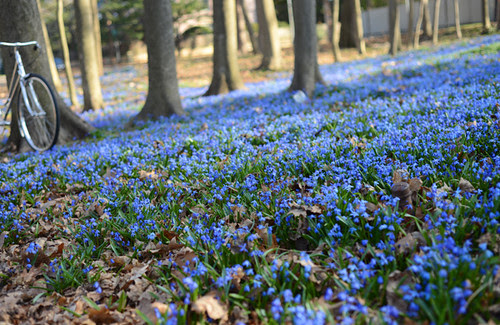 Every April, some of my bicycle photos feature a background of what appears to be a carpet of blue  flowers. Readers ask all the time what those flowers are and where I managed to find an entire field of them. Funny, until about 4 years ago I do not remember seeing many of these around myself. Then one spring - my first spring of cycling - I was riding around the neighbourhood and discovered a patch of them on a lawn. It caught my eye, because the shade of blue seemed unnaturally over-saturated. From a distance it looked like someone had spilled cerulean paint on the grass! Later I spotted another small patch of the same flowers in a nearby park, and again marveled at the effect. I meant to investigate further, but a week later the flowers were gone. I did not think of them again, until the following April, when they reappeared in much larger quantities. Now the lawn where I had spotted the first patch was covered with them completely. The ones in the park had spread over a wider area as well. 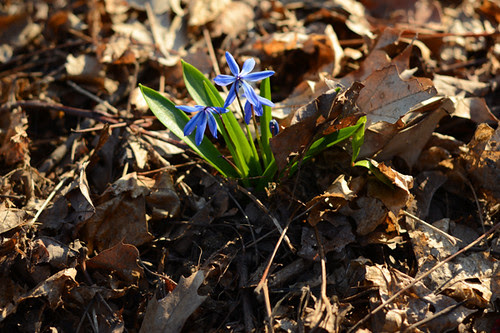 When I stopped to examine the flowers closely, I saw that individually they were not remarkable or even especially pretty. Scraggly tiny things with long, misshapen, sharply pointed petals. It was hard to find one photogenic enough to photograph on its own, and large enough to capture without a macro lens. 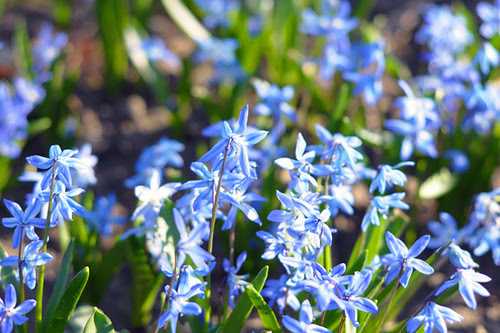 Their beauty came from growing in clusters. When they cover a patch of soil, all those tiny blooms merge into a quivering sea of blues and greens of incredible intensity. The larger the area they spread across, the more mesmerising and overwhelming their effect. 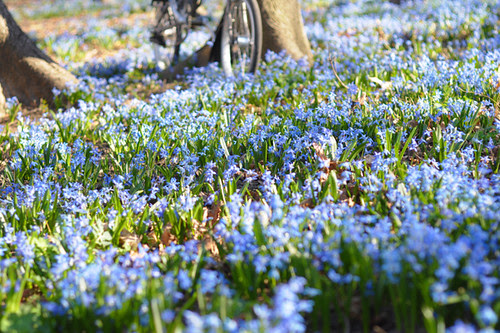 By the third year, they'd spread further still - spilling over to multiple lawns all over the neighbourhood, and transforming the small fenced-in park near my house. Finally I learned what the flowers are. Rather unromantically, they are called wood squills. Also known as Siberian squill, or Scilla siberica - a "bulbous perennial in the family Asparagaceae." The flowers produce blue pollen, which may explain their misty, hazy quality when observed from afar. Easy to cultivate, they spread by seed and form large colonies in early spring that bloom quickly and disappear by the time the first growth of grass is ready to be mowed. 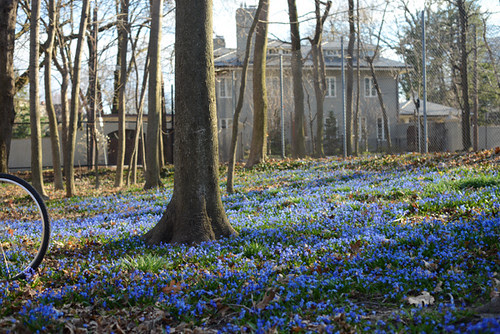 Apparently Scilla siberica colonies can become invasive, and it looks like our little park has been invaded! Even this year's cold, slow spring has not stopped the squills from covering the entire stretch of the woods in cerulean carpet, turning the park - a popular pedestrian shortcut for locals - into an enchanted blue forest. Walking through here is absolutely stunning. One of those sights that makes you breathe in deeply, squint at the sun, and just feel happy to be a part of this strange, beautiful world.
Labels: Boston flowers stories