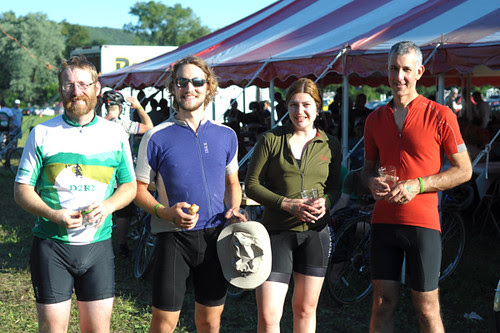 Monday Mailbox is a weekly post dedicated to questions received over email. Here is one that taps into a popular topic:

Until now I've been cycling on my own, but I am considering club rides. I see that most cycling clubs in my area offer women's rides in addition to their regular [mixed gender] rides, with the idea that this helps women feel more comfortable. [Also,] talking to women [cyclists] I get the sense that riding with men is not such a nice experience. What are your impressions of cycling with men vs other women? Is there an advantage to women only rides?

From personal experience (as opposed to stories others tell me), I have not formed any generalised impressions of gender as tied to specific cycling behaviours.

For background: I occasionally take part in women-only club rides, as well as in mixed gender club rides. I also do lots of informal riding with 1-3 cycling buddies at a time, and the gender split there is roughly 50/50 (meaning, roughly half of my cycling buddies are men and half are women).

Among the people I ride with, I cannot say I notice a difference in riding style based on gender. Possibly this is because other differences are more prominent. For instance, there are experienced riders versus inexperienced ones. There are competitive riders versus non-competitive ones. Some riders are aggressive and take risks, while others are mellow and risk-averse. There is a category of riders who only talk about cycling while they're cycling (technique, nutrition, bikes), versus those who talk about anything but (philosophy, politics, gossip). I can think of other classification systems before gender starts to seem relevant.

As far as advantages to women-only rides... As I understand it, the assumptions there are that: (1) women enjoy the opportunity to socialise with other women, and (2) women feel less self-conscious without men around. If this applies to you, then that would certainly be the advantage. However, it does not apply to all women, including myself. Men don't inherently make me nervous, and women don't inherently put me at ease, it's really more about the individual. I'll join a women's ride if I want to ride that day, but not because it's a women's-only ride.

Judging by how often this topic comes up, I recognise it as a serious issue and don't mean to be dismissive. For women who, for whatever reason, feel uncomfortable riding with men, women-only club rides are a valuable resource. In that sense, I am glad that more of them are appearing all over.

But me, I'll ride with anyone. As long as they ride predictably and I can keep up. Conversation optional.
Labels: gender Monday Mailbox roadcycling