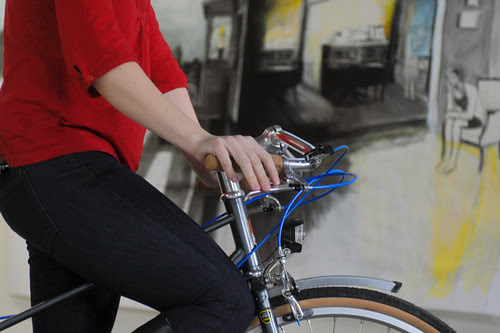 I receive a lot of questions from readers via email and occasionally dedicate posts to answering them. In an experimental attempt to do this more often, I bring you the first Monday Mailbox! To start, here is a question I get variations of frequently:


Don't get me wrong, because I love your reviews. But can you recommend some other resources that review and compare women's city bikes? I am trying to read as many reviews as I can before making a new purchase, but there doesn't seem to be much out there.

Good point. Despite the growing popularity of city bikes, there are not many sources online (or elsewhere for that matter) that review them in any kind of systematic manner. There are personal blogs where you can find reviews of specific bicycles that the author owns or has test ridden, and these can be tremendously helpful. But one downside to these types of reviews, is that the author often has a limited basis for comparison, and their evaluation of the bike will reflect this.

Although in an entirely different way, the same can apply to mainstream bike publications. City and utility bikes are still just starting to transition from a niche to a more mainstream product, and professional industry reviewers tend to have little prior experience with them. It is common for the reviewer to come from a competitive road or mountain bike background and either attempt to evaluate the city bike on similar terms, or as a novelty.

If the popularity of city bikes continues to grow, things should improve soon enough. In the meantime, here are the few resources I am aware of that specialise in city bike reviews. If you haven't checked them out yet, they are great places to start:

Momentum Mag Online: Vancouver-based Momentum Magazine posts many city bike reviews under their Gear category. Being a magazine dedicated to "living by bike," the writers tend to come from transportation, utility and urban cycling backgrounds. Momentum also posts a lot of comparison reviews - for instance of mixtes and cargo bikes, which can serve as very useful intros to a category of bike.
Limitations: The reviews tend to be on the brief side and often use stock photos. Also, there does not seem to be a clear separation of reviews where the writer rode the bike, from write-ups that announce or describe a bike with no actual test ride having taken place.

Let's Go Ride a Bike: Highly personal, detailed, and well-illustrated reviews of mainly (but not entirely) women's city bikes - especially Dutch bikes, various step-throughs, and cargo bikes. Between the two of them, the authors of this now 5-year-old blog have owned and test ridden a variety of such bicycles, so they have a good basis of comparison within this category. Their photos and videos show riders' positions and other aspects of the bikes that manufacturers' stock photos miss.
Limitations: The authors have limited experience with bikes in categories other than what they feature. Also, the list of reviews needs to be updated with the latest additions - you might have to search to get them all.

Bicycle Times: This 3-year-old magazine doesn't focus on city bikes per se. You will find stories about touring, adventure and even performance cycling here. But they do review a lot of city and utility bikes and the writers seem well familiar with this side of cycling. The reviews are detailed, with the bikes test ridden thoroughly before impressions are formed. Original and engaging photography.
Limitations: The online review section contains reviews of many very different types of bikes and gear, rather than separating them by category. Keep scrolling to find more city bikes.

Ecovelo: While this blog is no longer active, Ecovelo still exists as a photographically-rich resource for those seeking commuter and utility bike reviews based on ownership and test rides. Over the course of the blog, the author's interests spanned from Dutch-style bikes to tourer/commuters, to folding bikes, belt drive bikes and more. The reviews are personal, but diligent and concise. The photography is extremely detailed and inspiring.
Limitations: No longer updated, so the information will grow increasingly dated.

Bikes for the Rest of Us:  When I was first shopping for a city bike, the Bikes for the Rest of Us blog was like a beacon of light in a sea of performance-oriented bike literature. Online since 2008, BFTROU seeks out and features bikes they deem promising based on manufacturers' descriptions, discussing what they se as the pros and cons of the model's features. There are some test ride-based reviews as well. Generally, they try to stick with bicycles in the budget to moderately priced categories.
Limitations: The site posts predominantly features and industry announcements, not reviews as such.

Sheldon Brown: the late Sheldon Brown was a bicycle rider, writer, lover, collector and mechanic who had a great many things to say on a great many topics. Even 5 years after his passing, there is still loads of relevant information to be gleaned from his eccentrically organised website on both current and older brands of city and utility bicycles. In particular, if you are looking for information on vintage 3-speeds or 10-speeds, or would like tips on how to convert old roadbikes to city bikes or derailleur bikes to hub (or fixed) gear, his site is a great resource.
Limitations: Sadly, the site is no longer updated. Also, by contemporary standards, the information is difficult to navigate.

If you feel I have missed any resources that focus on city bike reviews, please let me know. Hopefully over the years this list will grow!
Labels: bicycle industry bicycle reviews bike shopping Monday Mailbox