The Deceptions of Early Spring Sunshine 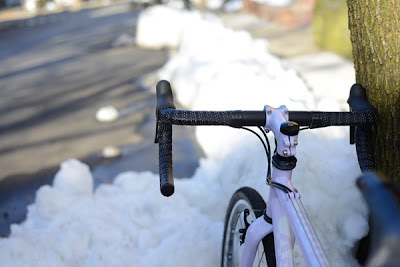 Here in New England, early Spring might be the trickiest time to ride. At least in the winter you know where you stand: It is cold, very cold - wear your warmest. There are no expectations for a stark January day to turn balmy, and the winter sun has an icy brilliance to it that promises only sparkle, not warmth. But come March, the smell in the air changes; the quality of light changes. We want to believe that nice weather is coming.

There is something about the early spring sunshine that distorts our feel for temperature. A 40°F March morning can feel like 65° when the sun is out, causing optimistic cyclists to dress for a 65° day. But as soon as the sun disappears behind a cloud, the chill of the real temperature quickly takes over, making it feel like the dead of winter again.

Setting off in the morning, it is natural to expect that the day will grow warmer, causing us to shed layers as we go along. But this does not always happen in March. A beautiful, seemingly short-worthy morning can be but a cruel prelude to a freezing day.

Much as I want spring to come, I've learned to anticipate these deceptions. If the forecast says the temperature is colder than what it feels like, I dress according to the forecast. The piles of snow outside are also helpful: If the snow is not melting, then it is not actually warm, even though it might feel like it.

Yesterday, I rode off into the lazy warm sunshine, gentle and inviting. An hour later the temperature dropped and it began to hail violently, giving way to a bleak and freezing afternoon. Crossing paths with a blue-legged cyclist pulling up his knee warmers, we nodded at the sky, then at each other in mutual "WTF was that" acknowledgement. I zipped up my jacket's vents and rode faster, just as fledgling rays of sunlight tried to charm me once again with their promises of spring warmth.
Labels: roadcycling winter cycling