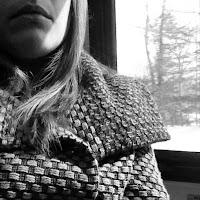 Sometimes I think about the phrase "Active Transportation," as used by cycling and walking advocates. I think about it especially when I find myself on a long distance bus, train or airplane trip, or as a passenger in a car: sitting still, sometimes for hours, as I am propelled through space with no input from my own body or mind. It is at times like these that the notion of active transportation is at its most appealing, because I am experiencing its opposite so keenly. This unnatural stillness as trees and houses flicker in the corner of my eye, this uncomfortable awareness of being carted, transported, delivered is what Passive Transportation feels like to me.

There is a great deal of focus today on encouraging physical activity. Walk more, be more physically active, be healthier. Getting around on foot and by bike are seen as crucial to a more physically active lifestyle. And public transit is included in what active transportation encompasses, because it is typically used in conjunction with walking or cycling. Walk a few blocks to catch the bus or subway, then walk some more to the office. And because there's no car parked at work, walk to and from lunch as well. An increase in physical activity, however small, is the goal.

Comparatively under-addressed are the psychological aspects of active and passive transportation. And here things get a little tricky, because in a lot of people's minds the car wins. When drivers explain why they want to drive and why they enjoy driving, much of it has to do with feelings of independence and control. The association starts early, as suburban American teenagers see their driver's license and their first car as tickets to freedom. The connection only strengthens in adulthood. Driving allows us to actively control our routes, our destinations, our schedule, our speed. Psychologically, this is active transportation.

Except for those instances when it's not - instances that in some parts of the world are becoming ever more frequent, possibly even the norm, and starting to redefine the driving experience. Those who find driving appealing tend to picture the ideal: driving a car along efficient highways or through scenic country roads, arriving at their destination to park directly in front of the entrance. But as many of us know, and quality of life studies are starting to note, this is far from reality today. Traffic controls car travel. In areas where it is heavy, it can slow cars to a crawl, overriding the driver's control over their speed, route selection, and schedule. The difficulties of finding parking, and obligations having to do with city ordinances, create additional restrictions. In an idealised version of the driving experience the driver may be an active agent, but in the real world they are increasingly not only passive but trapped.

Freedom of mobility is important to human beings. There is dignity in being independent, in being in control of one's movements and one's time. We place value in this, and with dignity and independence comes prestige. Modes of transportation perceived as more dignified will carry more prestige than modes that are not, and how the concept of active transportation is framed will play a role in this. Passive transportation users will be receptive to alternatives seen to offer more freedom and control, not just more physical activity.
Labels: social commentary transport transportation options