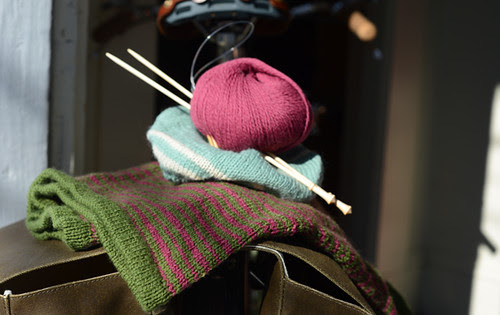 Last week I finally got back on the roadbike enough to start marking miles on my calendar again. Birds were singing, legs were spinning, flowers were pushing through. Then yesterday, this happened. It's still on the roads today. And it's supposed to happen again tomorrow. I lost my temper and did something I hadn't done in some time: I knitted.

I am not a committed knitter, but I learned as a child and do it whenever the fancy strikes. Or when I'm frustrated. The winter of 2010-11 was terrible for cycling, but great for knitting. I made myself an entire new wardrobe, made presents for friends, and did a brisk trade in hats for bicycle components. I must have knitted over 50 hats that winter; it was pretty bad. I can never just sit there and knit, so it's always done in conjunction with another activity, like reading, or talking, or watching a film. I did try knitting while cycling on a trainer a couple of times, but the rhythms are too different for it to work well.

It's been a surprise to discover how many women who ride bikes also knit. They seem like such different activities on the surface: one is domestic and stationary, the other exploratory, active and physically draining. Maybe it's the contrast that's attractive. Or the rhythm. Or the element of independence and self-sufficiency that both provide.

Apparently Lyli Herse was a prolific knitter. She would knit before bicycle races and brevets, because it kept her from getting nervous at the start. She made matching sweaters for her tandem partners and randonneuring teammates, their patterns distinctly recognisable in the historical photos.

Today, there is Emily O'Brien, who is not only a knitter, but also a spinner (can make her own yarn out of fleece). Bobbin and Sprocket knits and crochets. Knitting Lemonade knits and embroiders. There is Roseread, who knits lovely socks. The writer Sally Hinchcliffe a bicyclist and knitter. There is also The Knitting Cyclist. And The Knit Cycle. And Knitting by Bicycle. And more! Some are predominantly cyclists who are also attracted to knitting. Others are predominantly knitters who also ride bikes. Either way, it's an interesting convergence of interests: Knit your own wheeling costume (or a handlebar flower?). Get on a bike. And ride where you like ...once the snow melts a bit.
Labels: DIY knitting winter cycling